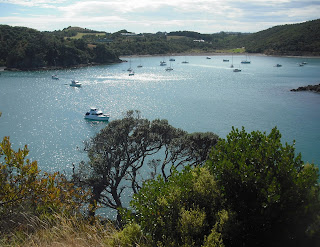 We had planned for almost half a year for a trip to New Zealand to spend our Christmas  holidays with our son.  Getting somewhere is always a part of the story.

A big part of the trip is the weather.  Global warming or climate change has become part of our lives, but even so as winter approached us in Canada we were hopeful we might not have to deal with the snow and the cold.  A fairly mild fall seemed promising, but remembering other years we decided rather than chance a risky trip to the Toronto Airport we would spend the nite before in a Toronto hotel and take a shuttle over.  As it turned out our instincts saved us from a high tension drive to the airport and shoveling and freezing.

We woke up on the second day of official winter to a fairly heavy snow storm.  A much better trip to the airport came with the Comfort Inn shuttle.  The driver had a good sense of humour.  We arrived good and early.  We thought we had things under control by going through security well ahead of time,but it turned out we got confused before realizing our boarding gate was in the opposite direcion requiring a lengthy walk involving two flights of down escalators and two flights of up escalators.  A five hour flight was delayed about an hour and was a trial run for our trip across the Pacific.

Arriving in Vancouver we met an old friend, Bob Stone.  I have told many that my closest friend lived over 3,000 miles away.  I met Bob a little before grade 7 with Cub Scouts that neither of us belonged to for very long.  Our friendship really developed in grade seven, but we went to different high schools, then I moved for two years to a rural area about a two hour drive away.  At the time of the move we had quarreled and it seemed like that was the end of it all.  Bob was very disciplined and had bought a car while still in high school to have his own independence.  He drove and I hitch-hiked  ( http://www.therealjohndavidson.com/2012/02/hitch-hiking-memories.htmll ) and our friendship survived.  When it came time to choose universities he chose Queen's (for its engineering program) and I chose Guelph because it seemed to have a unique system.  We kept in touch and for a year or two he actually occasionally visited me while he really visited his girl friend Adrianne who attended Waterloo.  She eventually transferred to Queen's.  We spent a lot of adventures together which might be a subject for another set of blogs.  After I graduated my first job was in Barrie, Ontario and I ended up boarding with Adrianne's parents.

We each were the other's best man when we got married. Years later Bob ended up in Vancouver while my life revolved around Ontario.  Years pass and contact thinned out.  A brief revival when our son Michael went to University of Victoria on Vancouver Island.   For one of our visits Bob actually was working on Vancouver Island and for another he ferried over to Nanaimo and we had a trip together to Tofino with an interesting side trip at Bob's suggestion to Coombs.         .

All this to make our meeting in Vancouver a little more meaningful for us.  Adrianne trying to get ready for Christmas (it was on December 22nd) joined us at the airport and helped guide us to a Bill Reid sculpture that used to be on the Canadian $20 bill.  Visiting them years earlier I had been interested in the Haida culture and later on one of our trips to visit our son we had seen the sculpture. Anyhow that was mostly an excuse to catch up.

The Vancouver Airport impressed us as at first it seemed more casually friendly but had a lot of unique features including a Haida theme that still interested me.  The stop over lasted a few hours, but we next launched the trip across the Pacific. 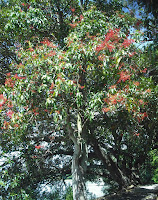 My experience traveling is fairly limited, but Air New Zealand made an aggravating long, inevitably cramped flight into a positive part of the trip. Every airplane has the problem of finite space limiting their ability to make a profit.  Air New Zealand worked hard to provide a positive experience.  Their staff was most helpful.  We enjoyed the food and the wine included in the fare.  I had watched the web site and looked forward to watching a number of movies.  After psyching myself to watch the movies I was at first put off that my seat which we upgraded to have more leg room didn't have a seat in front of it to provide a screen on its back.  It turned out that by hiding a flat screen (and also an eating tray) in the left arm rest I was able to see my movies.  On an air flight there has to be communication with the flight staff and several times our viewing was interrupted to give us some useful information.   Their inflight safety instructions are based on a humorous video.  We had a few interesting conversations with the staff and one fellow passenger, Tom who was visiting his sister in Wellington.  He was from England, but had been living in Vancouver for about a year.

Some of the first things we visited were at natural parks in Auckland.  We visited areas called reserves and went for a walk.  Haley pointed what locals call New Zealand Christmas trees.  Much closer to my son's home is the Panmure Basin.  More trees, birds and we stumbled on a very nice hotel. (a future resource?).

Christmas in the southern hemisphere presents some challenges.  A lot of our northern themes are based on snow and early darkness.  Consequently few Christmas lights are seen but Michael took us to a neighborhood that has taken up the challenge--Franklin St in downtown Auckland.  A lot of creativity on display. 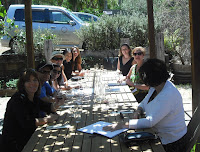 Christmas was a quiet private affair.  Sharon and I agreed this trip was our present for each other.  Skyped with Heather back in Ontario at a family gathering.  We had brought a few gifts from back home.

I wasn't sure if they celebrated Boxing Day, but they certainly do. Sharon and I ended up at Sylvia Park Mall and it was crowded.  We ended up buying gifts for two nieces and one future nephew as well as ourselves and a few others.  Very impressive mall. 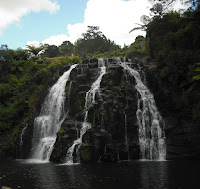 Next we were driven to Tauranga (fifth largest city in New Zealand) with a few interesting stops along the way.  Owharoa Falls and an Oceana Gold abandoned minefield in Wahi.  Bought some souvenirs. Only went up Mt Maunaganui part way and marveled at the sheep grazing.  In Tauranga itself we found Thai Thani 2 near the water with very good food and service.  Later in Paeroa we felt ignored in our first restaurant and moved further down the street to get very good service from Kumar's with nice touches in the food. The chef came out to clarify one of our requests.  They kindly played my favorite Tamil song on their video machine. 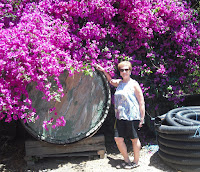 We became aware of Waiheke Island on our previous visit and in the meantime developed a keen interest   It turns out to be more interesting once we arrived.  It is larger than we realized and has a lot of natural beauty.  Apparently it has a population of about 8,000 year round, but in the summer holiday season (January) it blooms to about 40,000.  It is a 35 minute ferry boat from Auckland and about 2,000 commute for work.  We went on our first wine tour and were taken for tasting to three wineries, including one certified organic. Apparently organic does less harm to your body.  We ate at the last one, Passage Rock outdoors.  Our group came with people from Britain (parents visiting a daughter who also came), three long term women friends coming for a wedding and two women from New Jersey.  The tour guide, Grant told us he felt dairy was cruel for cows, but ate dairy anyway while feeling guilty.  A lot of good conversation. 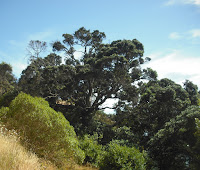 Tramp tracking, a recently learned term took us up and down through bush and cliffs.  We also visited a world ranked olive oil business, Rangihoua and bought some of their products.   Finished off our second Waiheke day at Red Crab Thai overlooking water.  They were about to close, but kept open for us and some others that came afterwards. 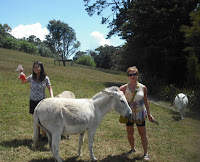 On a trip to Matakana we visited the Honey Center in Warkworth, and a nearby Donkey Sanctuary where we fed carrots to the four legged residents.  In Matakana we encountered very heavy traffic all headed to another Market and afterwards dined at the popular Rusty Pelican. On the way back we walked a trail at the Parry Kauri Park.  The Kauri tree is a remarkable huge tree that had been cut by early settlers almost to the point of extinction before it was appreciated for its unique versatility.  It is making a comeback.

One complaint from travelers is that they can't seem to get off the beaten path and learn what the locals really like.  Our son had discovered a local market after hours.  It was in the underground parking at a large plaza.  Exotic ethnic foods at very good prices as well as variety of merchandise.  Another day we went to a Sunday morning market in Takapuna and bought some more goodies.

New Years Eve was the first time in over 20 years we have not hosted a house party.  After dining at a restaurant (Portofino) we were dropped down by the Sky City, listening to some music (by Sons of Zion, a reggae band I now listen to) and wandering around over to Queen St.  Crowds everywhere with a focus to the midnite fireworks from the Sky City tower.  It was spectacular and I wish I knew how to use a better camera.

With my son and Haley as guides we found two more great restaurants; Misashi, with Japanese cuisine in Milford and later in the day at Portofino with Italian food in Howick.

It may seem like we are uncommonly lucky in our choices, but really that is misleading.  This is one of my more unique holidays largely because of the efforts of my son and his girlfriend Hayley.  They asked what we wanted, did research, made reservations and found some new treasures for us.  Hayley helped track down a book I was looking for.  We were driven around for hours.  One goal of a vacation is to enjoy new experiences and we certainly did that.  Some of my most memorable holidays have come about because a family member or close friend moved.  This is how we explored Halifax, Montreal, Victoria and Vancouver.  It is not without some pain, but people go where they have some sort of interest.  You renew your connection and gain a better understanding of some distant location.

To check out the other half of our vacation check:  http://www.therealjohndavidson.com/2018/01/starting-2018-in-new-zealand.html
Posted by John F Davidson at 10:13 AM