"The Price of Civilization"

I read "The Price of Civilization" as I had enjoyed the other Jeffrey Sachs book my son Michael recommended, "The End of Poverty." 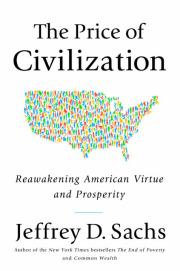 The title comes from a saying of Oliver Wendel Holmes who felt taxes were the price of civilization.  We could live in a world where the law of the jungle prevailed, but there would be a lot missing.

For instance a lot of what we call infrastructure would be missing. Roads, water works, airports, health facilities, etc.  Culture would be relatively primitive.

For another instance, security from all sorts of fears would be aggravated.   The feeling that allows you to plan ahead.  To motivate you to make an effort to make things better.

Amongst many other things Ronald Reagan deregulated media resulting in greater concentration of the message senders.  He also did away with service requirements and a fairness policy.  Broadcasters did what was intended, focusing on profits.  News became part of the entertainment package and changed to become part of the profit effort partly through sensationalism and partly through segmenting profitable niches.

Globalization has many benefits, but also in some ways generates a race to the bottom.  International co-operation is resisted by corporations who prefer to play countries against one another in such areas as wages, taxes, union rules and environmental regulations.

Redistributing wealth can boost productivity of the poor through education and nutrition, but of course powerful interests make this difficult.  Special interests have gained control of the United States partly because of the power of money.  But a disengaged population lets them do it.  People do vote for local special interests and then find that at the national level they work in concert to each get what they want.  Getting elected has become expensive and requires an almost constant campaign mode.

Jeffrey had some concerns on something more important than mere money, that being happiness. Westerners in general live in a consumer society and tend to addictions including gambling and watching tv.  He points out that excessive tv watching correlates with social distrust, obesity,  and low civic engagement.

He uses Buddha and Aristotle, both advocates of moderation as the key to fulfillment.  We can apply mindfulness to self, work, knowledge, other people, nature, the future, politics and the world.

One point that caught my attention was that Europeans generally pay more taxes, but enjoy a higher quality of life in many regards.  America

To learn more about Jeffrey Sach look here http://jeffsachs.org/  I recommend any of his books for depth of thinking.
Posted by John F Davidson at 10:44 AM