TRAVELS OF A SALESMAN PART 3 QUEBEC 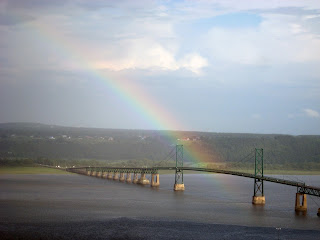 My sister Rebecca in Brossard, Quebec fed me and provided a place to sleep during my many trips to the Maritimes.  It is embarrassing to recall that when she was living by herself before having children my father and some of my siblings visited her.  Years later she mentioned how important that was to her as she didn't know many people in Montreal and her husband  Ali was out of the country.  I didn't visit, with my only excuse being I was busy doing other things.  I felt we had a good relationship, but it was mainly because of her efforts visiting her family in Ontario.

When it became self serving such as trying to save some hotel expense on a trip to the east coast it became easier to visit.  Both Rebecca and her husband Ali were very hospitable, in fact setting a standard few people would match.  As years went by and I had to travel back and forth to the east coast I made more visits.  Ali suggested that even though I didn't speak French I would have an easier time trying to sell in Quebec than a francophone would in Ontario.

In fact I used to set the alarm for around 3 a.m. so I could make it to Fredericton before it was too late in the day to make a sales call in English.  Driving past a population base of millions for the opportunity to sell to a population base of hundreds of thousands doesn't seem the best use of gas and time.  I had earlier signed up a Quebec veterinarian wholesaler with national distribution, but had only approached affiliated Ontario and Maritime clinics.  As time went by there developed a few other links.

Jacques Major, a fellow employee at OKD,  wrote an introductory speech in French.  Later he helped me adapt a story I told to win favour with receptionists.

I boned up on a few French words and was supported by French labeling and literature.   Calling mostly on veterinarians I was pleased to learn that there was usually at least one person reasonably fluent in English and often it was the veterinarian owner.  Speaking to the chief decision maker was not nearly as common on my other calls so this became a bonus.  There wasn't smooth sailing all the time.  I stumbled on lots of calls where I didn't make myself understood, but really only had one very negative experience because of my poor French.  I won't go into that, but every salesperson who makes cold calls has to deal with fear of rejection or of looking like an idiot and my Quebec experience provided a lot of realistic opportunities to deal with that.

My first call was on the south shore off Quebec City in Levis and it turned out to be a difficult French conversation.  I had been trying to relate how effective our solution was to get rid of skunk odours.  When I followed up they had actually bought my product as a floor cleaner and were very pleased.  I ran into many English speakers of various levels of fluency and mostly made myself understood.  I was moderately successful not only in increasing sales, but actually picking up stories of successful users that helped me in other markets.  Eventually I called on well over 200 Quebec clinics.

As an outsider to Quebec I had very vague ideas.  I knew Montreal was a major cosmopolitan city.  I knew Quebec City was a popular tourist destination.  I had heard other names, but they held no uniqueness for me.  Like any other province of millions of people Quebec has lots of unique (and very interesting) identities.

At one point I did more than just make calls along the route to the Maritimes, but actually spent a week at a time in Quebec.  From Rebecca's house I could make calls to about a three hour driving range that included Quebec City and Sherbrooke.  I went beyond that staying overnite in motels visiting Lac St Jean.  On trips to Ottawa I visited Gatineau.  On trips to northeastern Ontario I visited Rouyn Noranda.

I started to realize and enjoy that Quebec culture is very rich.  I listened to Celine Dion in French, but also learned of other Quebec singers.  I have since realized  that a lot of Quebec movies are first class and enjoyable.  http://www.therealjohndavidson.com/2014/09/french-canadian-films-are-world-class.html

Starting where my sister lived, in Brossard.  It was part of a string of communities that are grouped as the South Shore.  I was impressed with the local library and the system of walking trails.  I was dragged to a lot of shopping areas and found many of them enjoyable.  I had my car's oil changed at a particular fast lube place on three different trips in Brossard.  I eventually spent time selling on the north shore (which included Laval where I had sold some other things on the phone).

Favorite places included Sherbrooke, Victoriaville, the Beauce (south of Quebec City), Riviere du Loup.  I was able to circumnavigate Lac St Jean and wished I could have done it more slowly.   Ali had biked around the lake as a university student.  Quebec City is one of the most interesting cities in all North America and I am glad I was able to go back without the pressures of sales calls. Montreal is a cosmopolitan city with a lot of interesting things--one that comes to mind is the market on Jean Talon.  The South Shore is also a very pleasant place.  This brief list of names by no means exhausts all the beauty of Quebec.

One of the biggest legacies came from a trip to Quebec City where I had a limited window because of commitments to travel elsewhere.  I had mapped out my calls to veterinarians and was curious about the proximity to some tourist attractions--old Quebec and the Montmorency Falls.  I felt railroaded in a morning rush hour and ended up going through old Quebec and then later looking for a clinic to the east found myself driving by Montmorency Falls.  I knew I had missed a turn and had to turn around. At that point I noticed Ile d'Orleans.  It just looked like a lot of trees, but people were driving over the bridge.  My curiosity was aroused.  When I got back home I did some research and became even more fascinated. 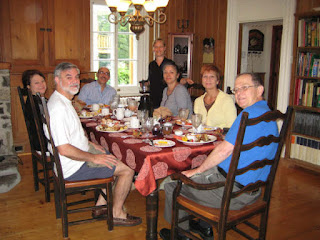 For one of my milestone birthdays my wife asked me what I wanted.  I decided it would be nice to visit my sister in Brossard and make a holiday of it.  I was no longer visiting Quebec on business.  I suggested we could go to Quebec City.  Even then I was planning on a side trip to Ile d'Orleans.  We stayed in a Quebec City motel and of course visited the famous old Quebec.  I felt like I was dragging my wife to Ile d'Orleans and was very disappointed at my first two planned stops as they were not open or we couldn't locate them.  I was ready to admit defeat, but my wife's attitude was we were already there and might as well continue to circle the island. Her boss had once done a bicycle tour of the island.  The next stop less than ten minutes later (and not planned) turned out to be very delightful.  It was a bakery with very different and wonderful pizza.  Further down the road we ran into some boutiques and then a fabulous chocolate place.  We bought some local wine.  We had dinner beside Montmorency Falls which was another wonderful meal with a beautiful view.  A year later we decided to spend 4 days on Ile d'Orleans at a bed and breakfast and thoroughly enjoyed it.

Back in Montreal my sister gave us a tour of Montreal that would have been more enjoyable if I wasn't so tired.  Did have some of the famous Montreal bagels and saw old Montreal.  When I go on my sales trips I don't always see the most scenic sections.

Talking to Peter Cotton (my cousin Donna Stewart's husband) I started to tell him where my favorite drive was and it turned out we both agreed on a road to Beloeil, just off the Trans Canada Highway. Something about the particular houses along the river.  Peter had been involved with the design of some restaurants along the harbour in Halifax that I also enjoyed.

While staying with my sister's family I got involved in some of their routine.  On several occasions went on long family walks.  I remember on a couple of occasions going with my niece Leila delivering newspapers in the morning (something I had done a great deal of in a previous job).  Leila helped me visit a Montreal cat show where I couldn't always make myself understood.  Samia, my sister's other daughter had developed an interest in Tae Kwon Do.  I had picked her up from a practice and attended one competition.  That developed into a passion for both Samia and her mother, both of whom got black belts.  Samia has competed at a high level internationally.  I also remember enjoyably socializing with friends who had originally come from Ali's home town of Safi in Morocco, both at their home and my sister's.  As usual they were all at least tri-lingual including their 5 year old son who couldn't understand why my French was so poor.  He thought everyone in Canada spoke French.  One year I was invited to attend an Eid dinner which is the traditional end to Ramadan. Often I got to enjoy some really good Moroccan cuisine eaten in a unique style, plus other interesting menus plus an impressive tea ceremony put on by Ali.

I like to think of myself as an opportunist.  We all think that if only the right opportunity would offer itself our fortune would be made.  It happens for some people.  What most of us do not always realize is that there are always opportunities and some of them are mind blowing.  But we aren't always looking for them so they either go unnoticed or sometimes sooner or later someone else discovers them.  I am glad that I took an opportunity to explore Canada's most unique province and get to visit my sister's family more often.   I owe it to my brother in law, Ali who encouraged me with his one observation and his many acts of hospitality.  I am grateful to Jacques Major who gave me a very helpful tool and opened up the door to life changing experiences. 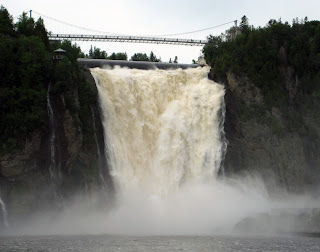 The photo at the top is of the bridge going to Ile d'Orleans.  I probably never would have seen it if I had not missed a turn and realized it when I saw the Montmorency Falls.  My wife, Sharon took that one.  The second photo is at a bed and breakfast in Ile d'Orleans where we met two couples from Brooklyn New York that were very enjoyable company.  The photo at the bottom is Montmorency Fallls which is actually higher than Niagara Falls, but much narrower.  You can see a pedestrian bridge over the top of the falls which my wife walked across.