"The Crisis of Zionism book review 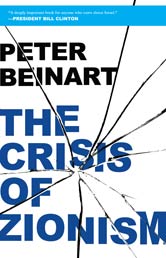 As an outsider (in the sense of not being Jewish and not having ever visited Israel) I can easily be accused of ignorance.  On the other hand we all benefit from understanding what outsiders think even if they are totally wrong.  I grew up thinking of  "Exodus" as one of my favorite movies, however as I got older I became aware that it represented only one viewpoint.  I am now aware of other viewpoints.

Peter Beinart, who I have found in other contexts to be intelligent and objective has more of an insider perspective on Israel and is very concerned.  Peter might be described as a liberal Jew who sees Israel as not treating Palestinians fairly.  Most Jews in the United States seem to vote Democrat, but because they tend to be liberal they also tend to inter-marry more and are losing their Jewish identity.  Other Jews, especially older ones see themselves as victims and view Israel as a possible refuge or at least as a beacon.

The author is concerned that Israel is losing its democracy.  Many Israelis emphasize that they are victims and don't realize that they now have power and are using it to impose hardship on others.  A significant segment of American Jews support the right wing approach which essentially is to keep the Palestinians from having their own state.  Many of those who feel more liberal are gradually losing their identification with Israel.

Beinart is concerned that the current Israeli government is turning the world against Israel.  Including the occupied lands Palestinians are likely to become more populous in the near future and this will force a difficult choice.  Will Israel remain Jewish and will it also remain a democracy?

Barack Obama has a personal perspective on Jews which surprised me.  One of his early mentors was Arnold Jacob Wolf who believed Israel and American Jewish organizations had to be democratic and felt Jews should de-emphasize victim-hood.   Some liberal Jews were closely tied to Obama's education and to his political rise.  Obama spent part of his upbringing amongst Muslims and is well read on their perspective.  Beinhart thinks Obama was out maneuvered by Netanyahu and sees danger.

Benjamin Netanyahu  has a different vision for Israel and its role in the world. He sees the Palestinians as an obstacle to Israeli and Jewish security.  The settlements in the west bank are seen as a necessary and desirable move although Palestinians and many others see them as a threat to peace. There is a feeling amongst some hard liners that Jordan was taken away from them.

Evangelicals, particularly in the United States have an influence on the dynamics.  They believe Christ will come back, but only while Israel is ruled by Jews.  Several years ago at one  of my jobs I had my eyes opened by a fellow worker who I respected that the second coming was moving forward and would take place in Israel.

It is all very scary, but I believe Peter Beinart has a valid perspective that should be seriously considered.
Posted by John F Davidson at 8:23 AM