ENERGY AND OUR FUTURE, RISING POWERS AND OUR SHRINKING PLANET 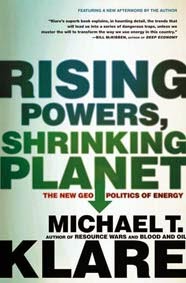 A few weeks ago I finished a book that covered up until just before the 2008 American election, "Rising Powers, Shrinking Planet" by Michael T Klare.  It is another of the books that is basically ignored by those who could most fix the identified problems.

First contention is that traditional sources of energy are becoming scarcer as more parts of the world are getting more desperate to get their share (really more than their share).  Second contention  is that while that is going on global climate change threatens to accelerate and the author believes the first problem will take away resources to deal with it.

Bottom line is that we as a planet are running out of time, but are oblivious to the problem.  I think we have all heard fearful predictions and just rush ahead with our life.  There is very little that most of us can do and we can become unsociable by trying to go beyond that.

When China and India the two biggest new players in the oil procurement race realized that they were really just bidding up the price when they competed for the same deals.  They joined together for their mutual benefit.  Michael had suggested that this pattern should be expanded to include research and manufacturing co-ordination with the ideal partners being United States and China or China and Japan.  During the Cold War when fears of nuclear conflict were at their highest Russia and United States took steps to cool things down with Summit meetings.  Now would not be too soon to start summits over scarcity of energy resources that would also allow greater efforts for the alternatives.

The second book, "The Race for What's Left" brings the readers more up to date.  Most of the easy hanging fruit of energy has been taken.

Conflicts over access to energy or distribution of revenues are becoming more common. It is obvious to me that the problem is exacerbated in the political arena.  There are so many books and presentations that have pointed out at least part of the problem.  I suspect that some of the people in power do understand the urgency, but are bogged down in the reality of global politics.  There are other powerful blocks of decision makers who are working against solving the problem i.e. those who think they can lose more by changing--those invested in current energy

Very few new oil fields are being discovered and they tend to be smaller and more inaccessible.  In general the energy sources that we have been relying on are fraught with political stresses and environmental concerns

In the second book Michael Klare discusses minerals and food, recognizing that they are also under pressure..

Some examples.  In Afghanistan the Chinese have bought mineral rights, but Americans are resentful. In the Arctic global warming is melting ice, but creating ice bergs and five nations are taking steps to grab as big a share as possible--United States, Russia, Canada, Norway and Denmark.  The Chinese by undercutting, and avoiding environmental constraints cornered the market on essential rare earth minerals and then cut off Japan who had offended them.  Russia cut off Ukraine from gas supplies in the winter.

Food is now part of the diminishing resources.  Saudi Arabia has bought large tracts of land in 'Ethiopia to safeguard future food supplies.  They are not nearly alone.  China has bought up farming land in several African nations.  They offer a sweet deal to the national government, both of whom overlook the people that are already using the same land (without recognized land deeds).  China, United States and Russia have found that offering military arms gives them the inside track.

Corruption seems to follow many deals.  The leaders at the top take the cream and those at the bottom are often boxed in more securely than before.  Part of the deal often includes military and police weaponry.  The Chinese boast that they do not interfere with the internal politics of those countries they do business with, but that is very hollow.  They usually knowingly reinforce the established status quo. Corruption seems to be the norm in many countries coming into sudden oil/mineral wealth.  It does not flow to the people.

Corporations are struggling against one another.   Nations are becoming more and more involved in negotiations.   Russia discouraged one international company by suddenly enforcing environmental laws that had been ignored allowing Russians to take back.

I wondered what has been going on since he wrote his book. One response is here  http://www.huffingtonpost.com/michael-t-klare/the-energy-wars-heat-up_b_1505934.html

Michael T. Klare uncovers for me geo political stresses that I was unaware of.  He believes that more and more future geopolitcal news will reflect the results of fights for resources or disasters because of desperate searching for resources.  I believe him and expect that more of the news that will dominate our medium will be resource and environment oriented.  Do we just absorb the information or do we do something?
Posted by John F Davidson at 4:52 AM