It began as a challenge.  Could we make it?  Was a foot long hotdog incentive enough?  That is how some traditions begin. 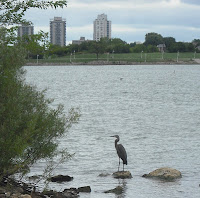 We don't have a cottage or enough money for long weekend trips so we make the most of the opportunities.  I came to the Burlington area about 40 years ago and for awhile lived with my sister and her husband Terry.  Terry introduced me to Easterbrook's.

A bit later I met my wife to be and as it happened with Burlingtonians she was already familiar with Easterbrooks.  After getting married we moved around a bit for about five years before settling down in Hamilton.  I admit that over time I gained weight and certainly lost conditioning. 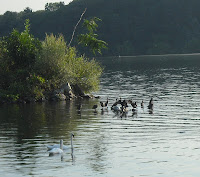 At one point my wife remembered she liked going to Easterbrook's and calculated that with the new Harbourfront trail it would be challenging, but something we could manage.  I wasn't so sure, but had reached a point where a challenge was just the thing I needed.   A long weekend with nothing planned seemed like a good time to try.

Just how long is it?  It is at least 6 kilometres one way with a few climbs involved.  We live in the north end of Hamilton a few blocks east of Bayfront Park.  Easterbrook's is in Spring Garden Rd just across from the main  Royal Botanical Gardens 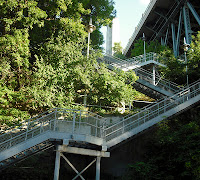 We made it and were quite proud of ourselves.  The footlong hotdog with fries tasted pretty good and the trip back was not as quick as the trip there.  Over the last decade or so we have tried to go on a long walk with some sort of reward in the middle.  It wasn't always Easterbrook's, but somehow we did keep turning back.  I am sure we have made the trip at least twenty times.

The challenge within a challenge.  Easily the hardest part of the shorter route.

Actually the walk shows off Hamilton pretty good.  Normally we walk along the Harbourfront Trail where you can see geese, swans, gulls, cormorants and occasionally herons.  A longer variation is to go by Dundurn Castle.  Sometimes we have taken the Durndurn route to avoid the High Level staircase which is a challenge within a challenge.  From the High Level bridge you get a fantastic view of Hamilton Harbour on one side and Coote's Paradise on the other. As you get close to Easterbrook's you pass by parts of the Royal Botanical Gardens.  Our route is very similar to the route taken for the Around The Bay Road Race, although not nearly as long does contain some of the most challenging hills.  The rabbit is from my wife, Sharon who took a much better one than I ever did.

The War of 1812 is commemorated in grounds adjacent to Dundurn Castle.

Most traditions don't start off as challenges, but some of the best ones do.  Easterbrook's gave us the incentive.  Easterbrook's has it own traditions and draws a lot of ordinary people, but also a lot of celebrities you can see photographed on the wall.  The big draw is the wide variety of footlong hotdogs they provide.
Posted by John F Davidson at 6:18 PM