The Biggest Surprise in my Family Tree Search

My father originally assigned me to check out our family tree at the time of my paternal grandmother's funeral, catching me off guard.  I accepted the challenge and later became obsessed by it.  With a few lucky breaks and a lot of effort I uncovered over 10 generations of some branches including some celebrity connections.

A satisfying outcome for sure, but along the way there was a shock that came from an unexpected revelation.  My shock was not unpleasant, just totally unexpected.  Watching "Finding Your Roots" on PBS I am conscious that many people have a past they are totally unaware of so it started me reflecting on my own past.

There were a lot of fluky incidents that led to the surprising information.  Job and residential changes were critical.  I grew up in Oshawa, finished high school in Haliburton, went to university in Guelph, got my first job in Barrie and then settled in Burlington where I met my wife's family.   For a brief time three of us lived in Kitchener and then came back to the Burlington area  and now live in Hamilton.  For a few years I worked in Toronto where I first went through Mormon records and census information.  A little later I got to talking to a fellow worker, Diane Houston who lived on the far side of Toronto.  She recognized a name I had mentioned and pointed out that the Markham museum had a lot of records regarding that name.

I phoned the museum and arranged to spend a few hours one afternoon.  The name was Raymer and before too long a curator brought out long lists of charts that were organized on clothing hangers. She had a lot of them and I went through many of them.  I was amazed at the size of the families and of the ages attained.  I was able to extend the family tree back a few generations.  I learned later that most of these records had been done by a dental patient where my wife worked in Burlington. 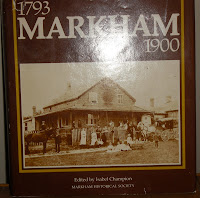 At some point the curator brought out a book of local history she had edited and started to show me some photos and the official stories.  I noticed something odd.  Around where she was directing me were some references to Mennonites.  She then informed me that all the charts I had been looking at were for Mennonite settlers in the area.

I was stunned.  When I had first accepted a job in Kitchener on an impulse I had driven north to watch the horses and buggies and the quaintly dressed occupants that were common there.  I have to admit to being very amused and shamefully even laughed.  It wasn't that I looked down on them so much as they were so obviously different from what I was familiar with.  When my wife and daughter (not quite one year old) moved in we enjoyed visiting St Jacob's and going to the Stone Crock, a well known Mennonite restaurant. We enjoyed it, especially with our daughter Heather who developed a liking for the apple cider (definitely non alcoholic).  I think this is where I developed a fondness for shoo-fly pie.  We bought an art book by Peter Etril Snyder with heavy emphasis on Mennonite life style.  We also bought a print of his which still hangs on our wall.  At this point we respected and were interested in Mennonite culture.

There were some repercussions from this new knowledge.  My Grandmother Coakwell was aware of the connection, but had never brought it up to me (she married into it rather than was a blood relation).  My Uncle Harold came across an old photograph that he thought would be interesting for me.  It was of the 200th anniversary of the Raymers in North America (around 1938).  Several of my already known relatives in the photo were pointed out to me. My mother was about 8 years old with a wide brimmed hat on in the front row.  My Aunt Ruth was in there, and my Uncle Harold.  Also my Grandmother and Grandfather Marshall Coakwell.  I can still easily find my mother, but the rest are more difficult. When I visited the museum again the same photo was there.

I learned a little Mennonite history.  After the American Revolution, Mennonites in Pennsylvania were concerned about being forced into the American army.  They sent out some of their members to scout possible new locations to farm.  Some went to the Waterloo area where they prospered.  Others went to the Markham area, but not nearly enough.  Within a few generations they found many of their members marrying outside their religion.  Mennonites can be very strict in their religion, but they have one belief that I respect.  They do not baptize their children until they reach a maturity enough to decide for themselves.  They do have a high tolerance for outsiders.

I made contact with a genealogical group in Pennsylvania and filled a few more spots on my lineage. It was common in Waterloo and elsewhere to refer to Mennonites as Pennsylvania Dutch, but in fact most of them were German or Swiss.  Americans found it easier to think of Deutsch speakers as Dutch.

Earliest known Mennonite ancestor was a Johann Michael Rohmer.  He was father to Abraham Rohmer who married Magdalena Groff who was sister to the second Mennonite Bishop sent to Upper Canada to Markham.  Abraham and most of his family left in 1807 in a Conestoga wagon, but were held up in Buffalo, New York before reaching Markham (a section named Mount Joy in honour of their home base in Pennsylvania) in 1809.  They changed the spelling of their last names to Raymer and Grove.  A son, John married Esther Hoover (previously Huber).  In 1836 their son, Martin married Sussanah Noble (herself descended from Americans who had fought in the American Revolution and thus outside the Mennonite church).

In a visit back to Waterloo with my young son, Michael who might have been somewhere between 5 and 10 I visited a Mennonite information site.  All this time I had felt a bit sorry for them thinking us outsiders looked at them as some sort of historical freaks.  I was surprised to learn they don't see it that way.  They have made a choice and are happy to let everyone know and recognize that choice.

In a later job I worked with horse people.  At different points I talked with Mennonite business people.  They were respected as tough business people and realistic evaluators of horses.  They were very computer literate, but did not drive cars.  They would befriend non members for rides.  I remember approaching one Mennonite in particular with no warning and his back was turned to me. When he turned around he immediately addressed me by name even though he had last met me briefly several months previous.

At another point I was dealing with Home Hardware and was able to visit a few of their annual supplier sales.  Home Hardware had its roots among Mennonites and still very naturally had ties to the members.

I hope to tell more stories of my ancestors.  It is important to remember that all our stories of ancestors reveal our commonalities as well as our uniqueness.
Posted by John F Davidson at 4:03 PM