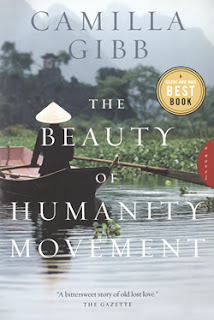 Libraries are an important part of my life.  I was fortunate to learn about the "One Book One Burlington" program and decided to investigate their choice for 2012.  "The Beauty of Humanity Movement" by Camilla Gibb is one I had not heard of, but librarians have earned my respect.

Since those years I have met a few Vietnamese--at the farmer's market where I buy mangoes and fish, some neighbours, one of my favorite sandwich places, Bahn Mi Excellence.  Nelson DeMille, a relative on my wife's side spent time there and has written about his experiences.

We are soon introduced to Maggie who is collecting art in Hanoi, but also trying to learn what she can of her father.  Maggie's father had been an artist in Revolutionary times.  Revolutionary leaders and their lackies recognize all forms of art can either reaffirm the Revolution or undermine it. Maggie's father was identified as a dissident and was tortured, but escaped.  Later he was able to get his wife and daughter out of the country, but he disappeared.

Maggie  mostly grew up in Minnesota, remembering her father became interested in art.  After much effort she locates Hung, an elderly pho (soup) maker.  He reacts to some of what she says, but cannot recall the critical details.  Over the course of the book we learn of his connection to some earlier artists.  He has his own interesting history but at the time of the story has been sort of adopted by a younger family.  Gradually some memories are re-discovered and some misunderstandings unraveled.

A focus of the book is a soup called Pho.  You may have noticed a few restaurants specializing in pho in many Canadian cities.  Several years ago I tried one and found it an interesting experience which I didn't really understand.  I could see it as a gathering place similar to coffee houses.  The soup is a collaborative result of French and Vietnamese with endless variations, but requiring a great deal of attention.  The social aspects of the soup help bring the story characters together.

For me the joy of the book was in revealing an interesting part of the world I have over looked.  The plot and characterizations made it compelling reading.

This was the fourth book by Camilla and they have been recognized with awards and listings.  To find out more about Camilla Gibb check http://www.camillagibb.ca/ 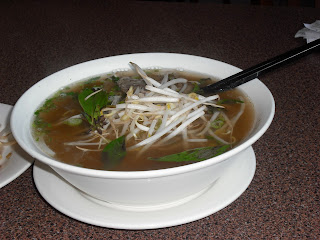 Having finished the book I had to try some Vietnamese soup to better understand how it could be such a magnet.  I chose to visit Thai Avenue which is close to the Burlington Public Library.  The waitress was helpful and soon provided me with a large bowl and explained some small details to make it more enjoyable.  I opted to use chopsticks although not very deft with them, I find it slows me down so I can appreciate the food better.

It was filling with a lot of flavour.  I had chosen one with beef, but also lots of noodles, sprouts and onions.  I enjoyed the broth as well.  If you would like to try what they have to offer you can learn more on their website: www.thaiavenue.ca/  Don't worry they will also offer you a fork and spoon.
Posted by John F Davidson at 5:05 AM