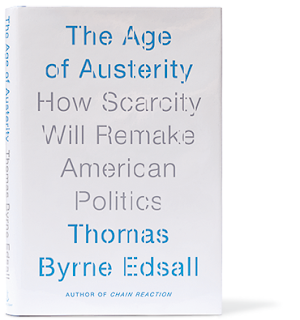 We live in "interesting times" to quote a Chinese curse.  Never have there been so many people chasing so many diminishing resources.  Thomas Byrne Edsall compiles a bunch of statistics with some observations to demonstrate that austerity is having an impact on American politics.

Demographics are a driving force.  In America the trends are that minorities are gaining at the expense of whites.  However whites are still in power and are reluctant to give it up.  The elderly whites feel especially threatened and resentful.  Basically those who have power do what they can to retain it and if possible expand it.  When things get scarce greed and fear are revealed.

It isn't just physical resources that are getting scarce. It also includes such things as jobs and available money for the masses.  The safety net is under assault.

Language is a tool in the battle. The word "entitlement" has come to mean undeserved and the Republicans have used it in that sense so often that Democrats find themselves using it as well.

The author seems pessimistic thinking that the main thing going for the Democrats is that the Republicans tend to overplay their hand.  The Republicans are conscious that demographics are working against them and feel some pressure to achieve their goals while they still can.

The author is sympathetic to Democrats, but doesn't think they are as unified as they need to be and that for the moment the Republicans have the edge.

The very specific thrust of the Republicans is to lower taxes and lessen regulations.  What this accomplishes is to consolidate their power.  They are very resentful of their hard earned wealth going to the undeserving.  They overlook that in the future the greater numbers of elderly will be dependent on the efforts of the greater numbers of minorities.   Inequalities are natural in capitalism, but at some point those in power are able to leverage a greater gap.

Demographics are working against the Republicans and so they feel a sense of urgency.  They know that Latinos, African Americans and other minorities will soon have the numbers to advance a progressive agenda.

But the problem cannot be confined to the United States.  Americans only make up 5% of the world's population, but consume 20% of the world' energy.  The rest of the world is trying to catch up.

A quote found in the text from Francis Fukuyama, "One of the benefits of democracy is the ability to legitimately extract from elites."  In many despotic countries of ancient and contemporary history this ability does not exist and all (including the very rich) lose something.

The author has laid out some frightening trends.  Whether there might be sufficient counter trends it is difficult to determine.  I think those concerned would do well to read this book and become more conscious of some very significant scary trends.
Posted by John F Davidson at 8:06 AM