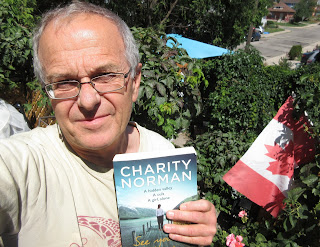 We are all the result of genetics, nurturing and circumstances.  All of these factors interact to make you who you are and how you in turn interact with others.  This post is more egotistical than usual, but I hope any readers can better understand how everything in life is connected.

I was born cross eyed (Strabismus) and to be honest I was not conscious of it, nor can I recall any ridicule.  Looking at early photos one can see my crossed eyes.  By about age 7 after wearing a patch over one eye, my parents decided an operation should be done.  That decision had life long implications for me.

It seems likely I had inherited it from my mother's side.  At least another three of my siblings also were born cross eyed.  Although I was not conscious of it, my parents must have been.  This was before OHIP (socialized medicine) and medical attention cost money.  My dad had taken over his father's coal business, but he sold it to pay bills and then underwent a slow process to eventually own his own small trucking company.  I know my eyes had been tested and I can only recall being checked for vision, but obviously more was discussed.

In grade 2 I was told I would be having an operation and to perhaps make it more acceptable was given the choice of which hospital to have it done.  My home in Oshawa was about half an hour drive to Toronto on the west where the doctor lived.  Of course it would be natural and convenient to have the operation done in my home town.  Maybe I was just contrarian even then, but I chose to go to a small town about twenty minutes to the east, Bowmanville.  Looking back that was a choice in itself with a long term impact.

What I remember of the operation was being put under by ether.  Afterwards I was blind folded and learned that would last for a whole week.  Lots of things are recalled.  I couldn't see anything or anybody.  I remember talking to an adult male patient in a bed in the same room and although with no details recall it was a pleasant experience.  The nurses were friendly and learned that one of them had sold us our family dog.  Being blind I had to have help going to the toilet down the hall and although a fussy eater found myself eating whatever was on the hospital dinner plate.  I do remember being indulged in ice cream after the ether had worn off.  Ice cream has always been my main comfort food as it was for my parents and siblings.

Most of all I remember my mother.  She visited every day and found ways to take my mind off my worries.  Two efforts in particular.  She read to me from a Thornton W. Burgess book, "Mother West Wind How stories" that I later bought more from the same author which led to heavier reading.  The other thing was she would place coins in my hand and let me keep whichever ones I could identify.   At first it was not so easy, but after awhile I ended up with all the coins my mother brought, including the 50 cent coin that was rare then and has since disappeared.

At least three of my siblings had a similar operation and they all chose (I am sure with support from my parents this time) to go to Bowmanville.  None of them were blindfolded for a week and in fact I think the younger ones came home the same day.

Being blind for a week made my hearing a little more sensitive.  I remember a game in cub scouts where I was blindfolded and given a squirt gun to ward off attackers and apparently generated a lot of laughter at my success.  I have not been afraid of the dark as I felt more comfortable in finding my way around when others were stymied.

Was the operation a success?  To be honest I didn't notice any difference.  I remember one aunt taking a close look at me and commenting that she thought I looked better.

BUT over the years I learned that there was a complication.  It was no big deal to me that prescriptions for glasses were different for each lens.  I wore contact lens starting some time in high school and did become conscious that my right eye was dominant.  Basketball was one of my great loves, although at 5'7" there were limits.  I was relatively strong and fast.  But at one tryout drill I realized I was not seeing someone pass the ball from my left.  I did play at the recreational level and have enjoyed watching it ever since.  Getting a driver's license I was told I was considered blind in my left eye, but still legal to drive.  I went for a physical examination for a factory job at General Motors (my father's best man arranged for the opportunity), but was rejected as they also considered me blind in one eye and the insurance was prohibitive in their mind.  I never applied for such jobs again.  My younger brother who had the same operation did get a job working on the line for several years and eventually his intelligence got him a job in the office.

Although not a good enough basketball player (there were other factors besides my height and eyes), but I was able to shoot baskets with slightly less than average success.  What I came to recognize is that putting the ball through the hoop is greatly aided by binocular vision where you use both eyes from slightly different angles to gain an effective focus.  What I and others did was first use "common" sense in that smaller perceived articles were further away so without thinking about it developed a sense of distance.  In addition muscle memory helps as you recognize how much effort it takes to get a result.  Not conscious as it is natural.   More on my basketball interest:  http://www.therealjohndavidson.com/2019/06/my-60-year-love-affair-with-basketball.html

Was I really blind in one eye?  Definitely not.  My left eye drifted off to the left and my brain paid more attention to the signals from the right side.  Although I had troubles with the one basketball drill I actually could detect movement from my left side so I had a slight gain in peripheral vision.  I believe a few times I received a split second early warning of some danger.  When I closed my right eye I could see with equal clarity from my left eye.  However I could not read anything, although over the years I tried to develop the ability.  I knew STOP signs by the shape and color, but struggled to honestly read.  After long concentration I could read short words, but I can appreciate I would be illiterate if anything happened to my right eye.  As I age my left eye gets tired before my right eye and I get minor head aches.

On one of my jobs, a horse publication I learned that you can easily tell the difference between predator and prey animals.  The meat eaters have eyes that are close together to help them focus on their dinner. Those who survive the attack get an early warning with eyes that are set further apart.  Some animals, like horses and rabitts  can see almost everything except what is directly behind them.   Guess what humans are?

My hospital stay helped reinforce an interest in books and also made appreciate smaller towns which became part of an unconscious habits as a salesman that felt more comfortable in small towns and rural areas.

I am lucky that my parents recognized a problem and were able to help fix it.  My appearance was normal and my eyes didn't draw any unwanted attention.  My fantasy of being a professional basketball player was never really taken seriously, but I could at least appreciate the role of vision in their success, although I suspect some players must have overcome physical including visual handicaps.  Perhaps it has given me a slight understanding of how dyslexia works as I am able to see normally with my left eye, but can't put the symbols together.

A big reason for the almost exponential growth of global population is modern medicine and technology.  A physical defect was rooted out in mankind's early history, but you could argue that today other talents than fight or flight have benefited civilization.  I like to think so.

The photo is one of my first attempts at a selfie to promote a New Zealand author, Charity Norman  I admire.  More on her:  http://www.therealjohndavidson.com/2018/02/charity-norman-discovery.html You can see my glasses slipped down my nose a bit.
Posted by John F Davidson at 10:36 AM