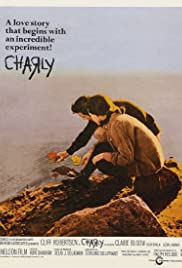 Mostly my movie reviews are done after seeing the movie just once.  I do read about the movie, with its cast and crew and often check the special features and more rarely watch a commentary version.  "Charly" (1968) was picked off shelf during when library opened up enough to browse shelves, spotted "Charly" which triggered some memories.  Movies do become dated and lose out to modern techniques, but "Charly" carried a message that resonated

My first was at a drive-in with my parents as a social outing close to its release time.  The focus was on the love story, where a poor mentally challenged man becomes a genius through surgery and wins over his teacher.  Tragedy strikes when he realizes that he will revert to his former self.  Attitudes towards mentally challenged got my attention.

A decade or two later  I picked up a DVD or maybe it was VHS tape.  In the meantime I had seen literally hundreds of movies, but still this one stands out.  I remembered the basic story, and absorbed the idea about scientists abusing innocent people.

My third viewing came recently with DVD from library.   The sadistic co-workers had a comeuppance when Charly actually completes a complicated procedure than one of his tormentors who felt humiliated.   Charly then lost his job.  People take comfort in knowing they are superior to someone else.  Reminds me that poor Southerners feel superior to blacks.  Classic line:  "I was wondering  why people that would never laugh at a blind or crippled man would laugh at a moron?"

The Fourth viewing followed almost immediately and was the commentary.   Given more of back story of the production.  Cliff Robertson in 1961 played the same role in a television version, titled "The Two Worlds of Mr. Gordon."  Robertson was so impressed he bought the movie rights and turned it to movie a few years later.

Film techniques were used to show conflict especially evident with Charly's hurt feelings after rejection after what amounted to a rape attempt.  The situation switches when a sexual relation does develop.  Alice had been interested in Charly before his surgery, admiring him for his drive and persistence.  The doctors wanted to use a younger person for their experimental surgery.  She stressed his motivation and her relationship with him.  The Boston setting seemed more significant.  I have only been to Boston for about half a day, but was able to eat at a restaurant dockside as in the movie, saw a downtown park resembling the one in the movie and visited some grave sites downtown.   Boston also has a reputation for higher education.  Charly showed an interest in history.

A key ingredient in Greek tragedies was a hero who rose and then developed Hubris or excessive pride and fell.  In "Charly" it might be personified more for the scientists, but not Charly.  Excessive pride does not bring down the hero  He was not prideful, just enjoyed life and love and that ultimately made his story more tragic.

Ralph Nelson was both Director and Producer  Ralph received director training during the age of tv drama.  Top movie dramas like "Requiem for a Heavyweight" (1962),  "Lillies of the Field" (1963) for which he won an Oscar,  and "Soldier in the Rain" (1963).  He also got experience as a producer during his television period.

Ravi Shankar provided the music.  He is regarded as an expert on Hindu classical music, but has taught George Harrison to play the sitar which influenced some of the Beatle's music. The two of them were involved in a major fund raising concert for Bangladeshi refugees.  Ravi was chosen to compose music for movies with an Indian connection, but his talent was sought for other movies to help create moods.

Cliff Robertson  won Oscar for best actor for this film, but was not able to receive as filming in Philippines.  He had been   picked by President John F. Kennedy to play the young Kennedy in "PT109" (1963).   Other movies included "The Best Man" (1964) and "The Devil's Brigade" (1968).  Cliff had been a key person to unravel a major fraud in Columbia Studio, but resulted in being black listed.  He had tried to raise funds for a sequel to Charly, but fell short

Claire Bloom who played Charly's teacher, Alice was born in England, got her start on BBC radio and moved into Shakesperian plays.   Her big breakthrough came when Charlie Chaplin chose her to be in leading lady in "Limelight" (1952).  She toured North America with Shakespeare plays and made a Broadway appearance. Some of her leading men included Richard Burton, Sir Laurence Olivier, Rod Steiger (who she married), Charlton Heston and Yul Brynner.  In the 1970's shifted to television.  As I write this she is still performing.

Lilia Skala who played Dr. Straus was born and raised in Vienna Austria where she acted on stage and film.  Married to a Jew she fled and ended in America.  Her most famous role was in "Lillies of the Field" (1963) which garnered her an Oscar and Golden Globe nominations.  She acted in "Ship of Fools" (1965)  "Flashdance (1983) and on television in Green Acres (1969) and "Eleanor and Franklin (1976).

Leon Janney played Dr. Nemur was a child actor on stage and later made it to Broadway.  Mastered many accents and performed in a number of radio dramas.  Started acting in films during the Silent Era and later moved on to appearances on television series.
Posted by John F Davidson at 5:34 PM