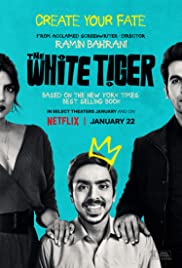 When Priyanka Chopra married Nick Jonas, I suspect it opened a few doors and the rest of us are beneficiaries.  "The White Tiger" (2021) is set in India, but is virtually in English with just a few lines of Hindi that are subtitled.  Priyanka has an important role, but is not the critical star, but her name gives much prominence.  Rajkummar Rao has a good following in Bollywood,  The real star is Adarsh Gourav.  More on them later.

The book is set at a time when India is modernizing and growing economically, but for the masses life is still a struggle.  Modernization comes with disruption.  The story tells of one man from a poor background who somehow overcomes many obstacles to become a successful entrepreneur.  Actually that one man is the narrator and soon we will be amazed at the contrast between his current look including confidence and where we are taken to his past.  How does he get from such humble life to a wealthy man?  It involves endearing himself to a young wealthy couple, but even that seems like only a step to being a servant.  We encounter a level of corruption not only of the wealthy family, but of politicians they deal with.  The turning point is when the liberal have a problem and turn on him with a somewhat  guilty conscience.  Living in a sort of limbo our hero realizes it will take drastic action to get out of it.  We are near the end at this point and there is a big shift in his fortunes, due to his aggressive action and clever opportunism.

The viewer can appreciate that India is modernizing, but also has a lot of dead weight in the form of caste crime and corruption.  Poverty means that literally millions are very poorly educated.  Modern times have opened up opportunities for those who are smart and well situated.

The book, "The White Tiger" came out in 2008 and won the Man Booker award plus made the New York Times Best Seller list.  The author Aravind Adiga had been born in what is now known as Chennai, India but his family moved to Sydney, Australia.  He managed to study at Columbia University and Oxford before he became a financial journalist for the Financial Times and later an Asian correspondent for Time.  He has moved back to India.

The producer, director, script writer and editor, Ramin Bahrani  must have been inspired by Aravind as he had five movies going back to 2005 thanking the author in screen credits.   American born with Iranian parents, he has been involved as a producer, writer, director and editor for such films as "Chop Shop" (2007), "Goodbye Solo" (2008) and "99 Homes" (2014).  His touch on so many aspects of this film is one reason it is so satisfying.

The music score is by the team of Danny Bensi and Saunder Jurriaans.  They had met when they were both playing in different bands.  Danny played cello and studied music in Denmark, Germany, United Kingdom and United States.  Teamed up with Saunders, son of Dutch immigrants and wrote music for "Martha Marcy May Marlene" (2011), "The OA" (2016), "Ozark" (2017).

Cinematography by Paolo Carnera who has mostly worked in Europe is another highlight of the film.

The other editor, Tim Streeto has mostly worked with tv shows, the most recentl yone being "The Marvelous Mrs. Maisel" (2017-19).

Priyanka Chopra played the spoiled, sexy, liberal(rated) rich wife which she does very well, but also demonstrated a wide range of emotions.   She was born with two military physicians, educated in both India and the United States.  In 2000 she won the Miss India and Miss World beauty pageants which opened up movie opportunities. Some of movies she starred in included "Bluffmaster" (2005), "Krish" (2006), "Don" (2006), "Don 2" (2011), "Barfi" (2012), and "Mary Kom" (2014).  In 2015 she became the first Bollywood actor to headline an American tv. sries, "Quantico."  In 2019 she co-produced and starred in my top movie of that year, "The Sky is Pink." (http://www.therealjohndavidson.com/2019/12/the-sky-is-pink-my-top-movie-for-2019.html).  She has been a playback singer for 4 movies including "Dil Dhadakne Do" (2015).  In addition she has been a producer including "The White Tiger."  With her mother she had produced some regional language films including the Marathi version of "Ventilator" where she also sang a song.

Adarsh Gourav had the key role as the narrator telling the story about himself going from poor, unsophisticated rural peasant to a smooth talking tough entrepreneur.  In his first movie he played the younger version of the Shah Rukh Khan character in "My Name is Khan" ((2010).  He also appeared in "Mom" (2017) with Srivdevi.  Prior to this movie he had been a regular on three tv. mini series and done numerous commercials.

Swaroop Sampat played the corrupt politician as very hypocritical.  She earned a Ph.D. from the University of Worcester in England and then went on to become Miss India of 1979 and later married prominent actor, Paresh Rawal.  She has appeared in a number of television shows and films including "Yeh Jo Hai Zindagi" (1984)  and the acclaimed "Uri: The Surgical Strike" (2019).  She has been a producer of two long running television shows.

I hope Netflix's promoting this film encourages more to check out Bollywood.  As it is we can better appreciate that film making involves international cast and crew and we all benefit.

As normal I have bolded movies that I have seen.  Maybe for vanity, but I think it indicates an appreciation.