When one gets interested in movies and tries to understand what makes them memorable it pays to watch older movies.  A few Preston Sturges movies had been seen when I was young, but a lot of the subtleties passed over my head.  Looking at DVD special feature  there was a lot of experience, talent and circumstances that help explain why his films were so entertaining.

Sturges spent a significant part of his youth in France as his mother Mary d'Este had a wealthy husband who allowed her extraordinary freedom and she was close friends with Isadora Duncan.  He got his fill of classical French culture which he mostly disdained later in life.  While young he invented a kiss proof lipstick for his mother's business.  He invented a wide variety of devices and then turned to writing and eventually came to Hollywood.  His scripts were popular, but he was frustrated with how his words were handled and made a deal to offer a script dirt cheap if he could also direct the film.  "The Great McGinty" (1940) not only was a commercial success, but won him his only Oscar for writing original script.

He became the first significant writer to also become a director in the sound era.  He also became the highest paid script writer and one of the richest men in all America.

As a director he was a perfectionist demanding his exact dialogue and expressions.  This resulted in many retakes that upset those financing the movie

Sturges liked to dictate his scripts which helped them to sound natural.  He was very appreciative of Ernst Lubitsch (http://www.therealjohndavidson.com/2019/04/ernest-lubitsch.html) and often showed his scripts to him.   He loved double entendres and was strong on dialogues.  Slapstick was a part of his comedies. He developed a love for certain stock players (such as William Demarest, Al Bridge, Robert Dudley, Frank Moran and others) and giving them as rich a dialogue as the stars,  rewarding them as he attributed his success in early films to them

For a string of years he had hits which stand up well today. 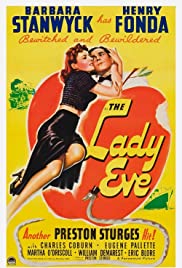 "Lady Eve" (1941) a naive wealthy snake scientist--attracts many women trying different strategies.  Barbara Stanwyck finds a more direct tactic--trips him and becomes aggressive, however the original plan was not to snare him as marriage target but as a card game victim.  The special features for "Lady Eve" included a segment put together during the Covid-Pandemic by Zoom.  They commented that the comedy was still there after almost 80 years.

"Sullivan's Travel" (1941) was about a director who is concerned that he is doing comedies when there is so much suffering.  Joel McCrea and a pregnant Veronica Lake.  After a number of trying circumstances during the Depression he concluded what the world really needed was comedies.

"Safeguarding Military Information" (1941) had Preston Sturges as uncredited writer and director.  This was completed before Pearl Harbor attack but prophetically uses a story line involving an attack on navy boat to Hawaii.  Used Eddie Bracken and Ginger Rogers to demonstrate how eas it is for information to fall in the wrong hands

"The Palm Beach Story" (1942) was a comedy with the wife of a unsuccessful builder trying to divroce him so she could marry someone rich and help her husband.  Claudette Colbert responding to Joel McCrea's query "Sex didn't enter into it?" with "But of course it had.  Sex always has something to do with everything."  A happy ending of course.

"Hail the Conquering Hero" (1944)  Everyone loves a hero.  Misunderstandings are a staple of comedies.  This was filmed about a year before the end of the war and focused on a man who had lied about his war deeds, but underneath was a good guy.  It made fun of politicians.  For the 1945 Oscars this film was nominated for best writing along with "Miracle of Morgan's Creek" (1943) probably splitting his chance to win the award.

"Unfaithfully Yours" (1948) was originally written years earlier, but Sturges was unable to get any director to use the script.  He originally thought of James Mason for the lead, but he was tied up.  Rex Harrison rejected it before reading, but later changed his mind. As it turned out Rex was married to Lilli Palmer, but had been having an affair with Carol Landis.  After the film was finished but not released Carol apparently felt depressed and killed herself with Rex being the one who discovered the body.  This spoiled much of the promotion strategy and the film lost money.    His girl friend, Frances Ramsden had been offered a role, but had to undergo surgery.

For a short time he aligned himself with Howard Hughes, but only one film came of it, "The Sin of Harold Diddlebock" (1947) starring silent screen star, Harold Lloyd.  Hughes changed his mind and broke the partnership.

His career went downhill partly because financiers were concerned over his perfectionism and he rubbed some people the wrong way..  "The French They are a Funny Race" (1956), a remake of "Lady Eve" was his last film.

From the IMDB trivia section I would like to close with a poem written by Sturges when asked to write an epitaph:  "Now I've laid me down to die / I pray my neighbors not to pry / too deeply into sins that I / not only cannot here deny / but much enjoyed as time flew by.