Delhi Crime is a Gripping Drama about a horrendous crime 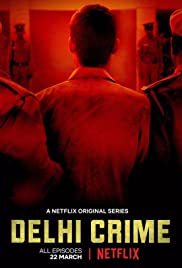 You may have read a bit about the actual crime  (Nirbhaya incident of December 2012) as it made the international press.  The horror of it is hard to comprehend.  If it was a typical rape it would not have captured so much attention.  It took place on a  moving bus and not only did it involve what is generally called a "gang rape," but one of the six perpetrators expressed his hatred of women by using an iron rod.  If you would like more description you have to seek other sources or watch the series which does give more details.  Rape laws were changed as a result to give the victims more credibility.

Such a crime generated not only national outrage, but international criticism.  The police are criticized and careers are threatened, yet they did an incredible job tracking down the rapists.who had fled to different parts of India.  The bulk of the series is about the obstacles in finding the guilty, convincing witnesses, dealing with legal restrictions, the press and violent protests.  The police were initially given little evidence very methodically uncovered little details and eventually caught all 6 rapists in only six days.  Personal details of the officers were part of the drama.  The media soon learned of the iron rod and stirred up the public reaction including misinformation that led to riots demanding the police do something. Political pressure was applied.  Several instances of people not trusting the police.

It won the International Emmy for drama series as well as 3 awards with the Asian Academy Critics Award and has done well on Netflix.  Below are highlights of some key contributors, but be assured many others are responsble for the high quality of the series.  Most of the dialogue is subtitled from Hindi, but about a third is English.

Richie Mehta is not related to Deepa Mehta, well known Canadian film maker who also has done films based in India.  Richie from Mississauga, Ontario graduated from the University of Toronto.  He took a film production course at Sheridan College and one of his experimental shorts ended up being made into a feature, "Amal" (2007) which made it to the international circuit and won him some awards.  Over the years he has written, directed and/or produced successful films such as "I'll Follow You Down (2013) and "Siddharth" (2013).  When he heard of the major rape story on international news he was concerned that  it painted India in a bad light and overlooked elements of the crime.  Looking for a feature film his six years of research he needed a mini series to squeeze in relevant details.  He saw it as a mission to bring light to the story.  He chose to emphasize the people involved rather than the horror of the actual crime.  To be as authentic as practical he used Neeraj Kumar who had been Delhi Police Commissioner at the time as consultant.

Robert Friedland, a producer was part of a movement to develop the Asian film market.  He is a mining tycoon who felt mining was poorly portrayed in films, such as "Avatar"  had been the executive producer for "The Sky is Pink" (my favorite film from 2019), "The Wailing"  (2016 Korean) and "Crazy Rich Asians" (2018).   http://www.therealjohndavidson.com/2019/12/the-sky-is-pink-my-top-movie-for-2019.html

Andrew Lockington composed the musical score.   He was born in Burlington Ontario and in 2008 the International Film Music Critics awarded him Breakthough Film Composer of the Year.  He has done the scores for such movies as "Saint Ralph" (2004), "San Adreas" (2015) and "The Space Between Us" (2017).  He had worked with Richie Mehta for "Siddharth" (2013).

The acting from not only of the listed ones, but all of the others lent credibility to this difficult subject.

Shefali Shah played the officer in charge in a no nonsense manner cutting through excuses, political pressures and red tape .  Shefali has won numerous awards and has appeared in "Mohabbtein" (2000), "Monsoon Wedding" (2007),  "Laksmi" (2014), "Dil Dhadakne Do" (2015)  and as the romantic lead in "Once Again" (2018).  She won an award for her role in this and is slated for a sequel.

Raskika Dugal played a trainee police officer who proved she was more thorough than most male officers. She has appeared in such films as "Manto" (2018), "Once Again" (2018) and "Hamid" (2018 for which she won best actress award).

Yashaswini Dayama  plays the daughter of the chief inspector and wants to leave (for opportunity in Toronto) because of her negative opinion of Delhi and becomes involved in protests.  She has appeared in "Phobia" (2016) and  "Dear Zindagi" (2016).

Adil Hussain plays a supervisor under pressure from politicians and bureaucrats.  He is very versatile is fluent in English, Hindi, Bengali, Bengali and Assamese.  Some of his films include, "The Reluctant Fundamentalist (2012), "Life of Pi" (2012),  "English Vinglish" (2012), "Tigers" (2014) and "What Will People Say"(2017).  An international award winner including Norway.

Underappreciated police are given a low budget resulting in becoming overworked and open to "gifts" and cutting corners.  Low esteem creates a vicious circle.  In this movie Richie depicts many of the shortcomings of the Indian police force, but also shows us some dedicated talented members which were modelled on actual officers.

Note:  As usual I have bolded films I have seen with the first mention.