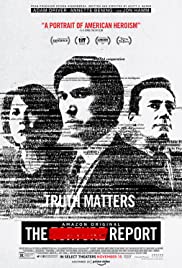 How can we ever be sure we know the truth?  There seems to be different versions of it.  Certainly 9/11 created a wave of activity, some of it productive, some not and some destructive... and some we still don't know about..

Elected officials, political appointees and bureaucrats (meaning government employees at federal, state or municipal levels) all were involved.  Almost all of them felt they were doing what they could to punish the perpetrators and to help prevent a re-occurence.   A number felt they needed to change the rules in order to be effective and some felt it was necessary not to be public.

The torture program was set up by contractors that had no experience.  There had to be a different mindset among those who had to approve the program.

"The Report" is about an attempt to find the truth.  It states that there were strenuous efforts to restrict the efforts.  They use real names.  It is hard to determine how much of the words spoken were actually used and how many were speculations.  Picasso once said "Art is the lie that tells the truth."

It is believable that there was conflict between the politicians and bureaucrats and amongst themselves.  It is believable that some people really felt it was necessary to push further than others wanted to know about.  There was paranoia at the time and there was a tricky balance between reassuring the public and doing the right thing.  Politics is all about power and perception is the key--someone dependent on voters can try to shape their views, but more importantly has to cater to them while also trying to take advantage of the rules.   Unfortunately there are (often successful) politicians who know how to manipulate or spin and understand the rules

We don't want to know what goes on in a slaughter house; we just want to eat our hamburgers with appropriate condiments--the truth would (and does) disturb many individuals which in turn has an impact on workers and corporate owners.

Leaks are frowned upon by politicians--Dianne Feinstein is quoted as saying Edward Snowden was a traitor.  Frustrations lead to leaks, often involving reporters who are supposed to be critical for democracy. Theodore Roosevelt felt he needed to use journalists to uncover corruption.  Read more:  http://www.therealjohndavidson.com/2014/04/the-bully-pulpit-by-doris-kearns-goodwin.html

At the end the report is released.  Diane Feinstein acknowledges that American enemies (and others) will use it against us, but that it will show the world what Americans stand for (in the future).    During the credits they repeat a quote from George Washington against any abuse of captured prisoners during the American Revolution.

Scott Z Brown wrote, directed and produced "The Report"  and has a history of presenting films with political and social implications.  In his career he started with shorts and tv. episodes.  He played a role with "An Inconvenient Truth" (2006), "Side Effects" (2013), "An Inconvenient Sequel" (2017) and recently "The Laundromat" (2019).  He had written scripts for "The Bourne Ultimatum" 2007) and "Contagion"(2011).  Originally he conceived "The Report" as a satire, but as he researched the material he felt it needed to be as realistic as practical.  Check:  http://www.therealjohndavidson.com/2017/11/an-inconvenient-sequel-truth-to-power.html

Steven Soderberg who often work with Scott was the co-producer.   His first experience in Hollywood was as a freelance editor.  Like many he filmed a lot of shorts.  His big break came when a rock band, "Yes" gave him a chance to film a full length concert.  He won awards at the Cannes Film Festival for " Sex, Lies and Videotapes" (1989).  He is famous for "Traffic" (2000) and "Erin Brockovich" (2000) which made him one of the few directors to have two Oscar nominations in the same year with "Traffic" winning.  He also done cinematography, often under a pseudonym, Peter Andrews admitting that he is not the most skilled with the camera, but that made him feel closer to the actors.

Greg O'Bryant, the editor has also been a producer and writer.  He edited one episode of "The Loudest Voice."

Adam Driver played the investigator Daniel J. Jones.  To me it was great casting and perhaps his best role.  He gained attention in some of the Star Wars series.  Some of his other movies are:  "Silence" (2016), "BlacKkKlansman" (2018) and "Marriage Story" (2019), the last two of which resulted in Oscar nominations

Just finished watching "Mad Men" (2007-2015) where Jon Hamm is so prominent and it noteworthy for how unflappable he is and in "The Report" he plays a similar unflappable character, Denis McDonough, White House Chief of Staff under Barrack Obama.

The film used a lot of actors to play other prominent politicians and bureaucrats, but let John McCain speak in an archived video which I felt more meaningful.

Personally felt that its respectable IMDB rating could have been significantly higher and suspect that conservative trolls may have dragged it down a bit as happened with Soderbergh's films with Al Gore.  But admittedly progressive viewers might have tried to compensate.

My thoughts shortly after the release of the actual report:  http://www.therealjohndavidson.com/2014/12/torture.html

The movie "Truth" dealt with how truth can be obstructed. http://www.therealjohndavidson.com/2016/10/truth-movie-version.html
Posted by John F Davidson at 5:31 AM