Thappad, or in English The Slap 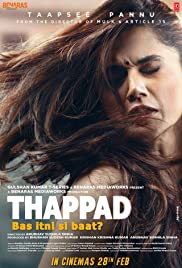 After watching this movie the best advice might be that it is better to forgive.  It doesn't mean that forgiveness is perfect either.   A principle is important, but adhering to some principles leads to problems.

The Slap of the title is delivered in the middle of celebratory party (after the male lead, Vikram gets an upsetting phone call).  The wife Amrita is humiliated and goes away to be followed by other women.  She is upset, but goes home with her husband.  She decides to move out after telling her husband she will return in a few days.  Other people compound the situation on both sides and she is talking to a lawyer, but doesn't want a separation or divorce.  The situation comes, to involve siblings, neighbors, in-laws (both sides) and a maid.  Lawyers have their own way of turning up the heat.

Prior to this and even after this (the slap) everyone was in good relations.  The husband had received some good news that pleased everyone.  He did get an upsetting phone call at the party and didn't think before slapping his wife who tried to pull him away from an argument.  Eventually she does decide to seek a divorce.  Everyone around her is counseling forgiveness, but she feels there is a principle.  Her lawyer thought she was too naive and after suggesting a reconciliation made the most sense, decided to play tough.

You will find yourself taking sides and maybe conceding a little to the other side.  This was a very happy marriage, with very congenial in-laws.  However the decision not to forgive affected many other relationships in profound ways.  I am reluctant to take sides and assume that literally billions of similar incidents have been forgotten and/or forgiven.  But one stubborn incident of resistance to the status quo can make us all examine ourselves more closely.

The movie did make us aware of the principle--you should never, ever, slap your wife (or anyone else for that matter).

It could be compared to the "Marriage Story" (2019) regarding the pain angle.  In "Marriage Story" as I recall lawyers aggravated the situation.  Arguments were often petty and there was a feeling of not being appreciated.  In "Thappad" Amrita had willingly accepted a role as a housekeeper.   Her mother and father had some interesting conversations reflecting on their own marital roles.  Several other relations are effected negatively, although there is some better understanding of gender relations.  Amrita's mother-in-law that had been very close said that mothers were to blame for not teaching their sons to respect their wives.  After the lawyers got rough Amrita felt she saw how much her husband had put his work above her.

The movie is well put together with the acting, writing, cinematography and unobtrusive background music.  The editing keeps you aware of simultaneous events.

Anubhav Sinha, director and co-writer, is known for his interest in social issues.  He was rewarded for his writing of "Article 15" (2019) which he also directed and produced dealing with discrimination against Dalits (previously known as untouchables).   In a previous movie, "Mulk" the focus was on discrimination against Muslims.  Several IMDB reviewers commented on negative political trolls for this movie.  Prior to this some of his film credits included "Ra.One," (2011) "Gulab Gang"(2014) and "Tum Bin...Love will Find a Way" (2001).
http://www.therealjohndavidson.com/2019/09/article-15.html

Mangesh Dhakde handled the music.  He had grown up with a father who operated a music school and at an early age met many musicians and was familiar with jazz, Western and Indian classical as well as Brazilian.  Prior to this movie Mangesh did the music for "Mulk" (2018)

Tapsee Pannu played Amritra and would be the big marketing draw.  She started in the south and has done movies in Telegu, Tamil and Malayalam.  Her films include  "Aadukalukm" (2011), "Baby" (2015),  "Pink," (2016) Mulk (2018) and "Badla" (2019). Check the links for two of the outstanding films she was prominent in:  http://www.therealjohndavidson.com/2016/11/pink-sensitive-film-to-deal-with-consent.html and http://www.therealjohndavidson.com/2019/09/a-masterpiece-film-and-very-good-remake.html

Pavail Gulati played Vikram and that should prove to be his breakthrough role.  He had to be reassured by Tapsee to make it a good slap.

The supporting cast was outstanding as this was really an ensemble film.

This is not a feel good-movie, but is very good at dealing with hidden emotions.  Many of the characters expressed repressed wishes and accommodating others.  The sensibilities of India might seem different to western views, but in reality not all that different.

I have bolded movie titles that I have seen.
Posted by John F Davidson at 6:19 AM