WITNESS FOR THE PROSECTION REMAKE OF A MASTERPIECE 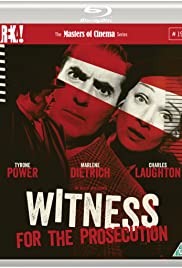 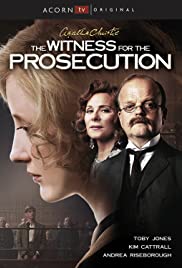 Remakes of successful movies are favored by some marketing experts, but pose a bit of a challenge to creative people who don't want to be seen as copy cats.  "Witness for the Prosecution" (1957) left a strong impression on my adolescent mind.  I was impressed by Charles Laughton's elocution as well as Marlene Dietrich and even Tyrone Power.  But the biggest impression was from the clever plot.  It was the first time for me that a guilty person could get off by having a witness willing to lie and then set up a lack of credibility of the same witness.   It also left an impression of sophistication.

In 2016 a British tv. version came out and recently I had a chance to see it.  My memory was a little foggy on details, but a few were spotted very easily.  There were many scenes of English sophistication, but there were also striking contrasts of a grubby lower class.  Instead of the eloquent Charles Laughton was Toby Jones in many ways as a pathetic lawyer with health and personal problems.  Laughton was under medical supervision, (with his real life, Elsa Lanchester playing a fussy nurse who annoyingly reminded him to take pills and to avoid stress).   He also used a chair lift.  Toby had a persistent cough that was attributed to wartime experiences.

Never read the book or the play as originally written by Agatha Christie.  Her books have  been masterpieces of plotting and character development.  Both of these versions illustrate that, but they are certainly different so somebody has used some creative license.

My memory failed me on British legal practices, but the script worked out.  Charles Laughton was prominent as the barrister, while Toby Jones was the focus as a solicitor.  In Britain there is a distinction between the person known as a Solicitor who does the legal research and background checks to the person known as a Barrister who defends the accused in court,   One set of writers may have felt the Barrister is the one who the public sees and if you have Charles Laughton with his beautiful elocution available it is a perfect match.  The more recent adapter may have felt this was an opportunity to be creative and focus on the solicitor who initiated the case and sought out someone like Toby Jones, versatile actor.

The endings were dramatically very different.  SPOILER ALERT (hopefully anyone reading this has seen at least one of the two films)  In the earlier version we see after the verdict is announced that the witness had misled and the accused really was guilty.  A murder followed when it was revealed the accused had another lover and Charles Laughton offered to defend Marlene Dietrich.  In the updated version the innocent verdict soon gives the accused an inherited fortune.  BUT Toby Jones feels justice can only be served if the guilty person is punished and he "proves" the maid killed her employer.   Later Toby chances upon the formerly accused living in luxury with the misleading witness/lover.  They soon let him know how he and the court were fooled and this upsets Toby who feels he sent an innocent woman to be executed. Instead of the guilty party suffering, the remoreseful solictor is seen walking into the ocean

Agatha Christie is the original genius that others exploited.  Noted for plot twists often making the least likely the guilty culprit.  "The Mousetrap" became the longest running play in history  Her book sales are only surpassed by the Bible and William Shakespeare.  She represents a mammoth challenge to anyone tampering with her plot twists.

Billy Wilder was the director and co-writer- of the 1957 version.    He was a prolific award winner, including 6 Oscars and many nominations) as director, writer and producer.  Born in the Austrian-Hungarian Empire he was a reporter in Austria who switched to Berlin where he was able to write scripts for some German films.  As a Jew he recognized the evil of Adolf Hitler and fled in 1933.  He spoke no English, but did end up in Hollywood where he was able to prove himself.  His films include;  "The Major and the Minor" (1942), "Double Idemnity" (1944), "The Lost Weekend" (1945), "Sunset Boulevard" (1950),  "The Apartment" (1960) and  "One, Two, Three" (1961).  He was Oscar nominated as best director while the film had 5 other nominations, but no winners. A quote:  "I was not a guy writing deep-dish revelations.  If people see a picture of mine and then sit down and talk about it for 15 minutes, that is a very fine reward, I think."

Harry Kurnitz, a co-writer shared nomination with Billy Wilder for an Edgar Allan Poe award.   Harry was also credited with a 1982 tv version of "The Witness for the Prosecution" with Diana Rigg, Ralph Richardson and Beau Bridges.   John Gay was the principle adapter and received
nominations for the Edgar Allan Poe award for his version.

Lawrence B Marcus, the third co-writer was credited as adapting  both the 1957 and 1982 versions

Susan Phelps is credited with adapting the 2016 version which won an award from the Writers Guild of Britain.  She also was an executive producer.  She has involved in the writing of a number of Agatha Christie books into tv series, including "And Then There were None" (2015), "Ordeal by Innocence" (2018), "The ABC Murders" (2018) and "The Pale Horse" (2020).

Charles Laughton played the Barrister in the 1957 version to full measure.  His character had suffered a heart attack and was under  doctor's  orders, to avoid stress but mostly ignored. His manner of speaking made an early impression on me and found few to measure to his standard.  Some of his standout performances include "The Canterville Ghost" (1944), "The Big Clock" (1948), "O. Henry's Full House (1952), "Hobson's Choice" (1952) and "Spartacus" (1960).

Toby Jones plays a solicitor who uncovers the accused Leonard Voles and is able to persuade him to be his lawyer.  In this role he is constantly coughing and has a wife who barely tolerates him despite his constant professions of love.  Toby has long been noted for character roles but his long history of stage and film roles have enabled him to take more leading roles.  HIs first leading role was as Truman Capote in "Infamous" (2006), but overshadowed by Philip Seymour Hoffman.  Other films he has starred in include "The Painted Veil" (2006), "W." (2008),  "Sereena" (2014).  He is slated to play in a remake of "The Canterville Ghost."  He played Alfred Hichcock in "The Girl (2012).   His wife is a criminal barrister.

Marlene Dietrich plays a German speaking actress and as usual is pretty sexy, although in her mid 50's  Josef Von Sternberg discovered and cast her in "The Blue Angel" (1930) and then took her to America where she starred in "Morocco"(1930) with Gary Cooper.  As a leading lady she was among the highest paid Hollywood actresses, but the public lost interest in her until James Stewart recruited her for "Destry Rides Again" (1939) in a comic role.  Another memorable role was in "Judgment at Nuremberg" (1961). Later she was successful as a singer.

Andrea Riseborough played the German speaking false witness.  Earlier films included "Birdman or (the Unexpected Virtue of Ignorance) (2014) and "The Death of Stalin" (2017).  She has had the honor of playing Margaret Thatcher and Wallis Simpson.

Tyrone Power was considered especially handsome (and also had a distinctive voice) and played Leonard Voles believably as a kept man later accused of his benefactor's murder.  He came from a line of stage actors and gravitated to swashbuckler roles such as "The Mark of Zorro" (1940).  His next film was to be "Soloman and Sheba" (1959 and he was also the co-producer, but he died from a heart attack incurred after a sword fighting scene.  His daughter Romina married and sang with Italian Al Bano and wrote the duck song.

Billy Howle played Leonard Vole, who we first see as a soldier.  After the war he has trouble finding a job, but after attracting attention of a wealthy heiress becomes a little more sophisticated, but after he inherits her money appears comfortable in a seemingly upper class role.  Billy appeared in "Dunkirk" (2017) and "Chesil Beach" 2017).

"Witness for the Prosecution" is one of the films that impresessed me as an adolescent because of the main actors and the plot twist.  I had recently gotten access to the Acorn streaming service and saw "Witness for the Prosecution" and puzzled over Toby Jones.  I couldn't quite see him in the Charles Laughton role, but in fact he did a very commendable job in the slightly different role.  Barely remembering the plot twist other than it was very unique wondered how this other version might deal with it.  The earlier version now strikes me more like a stage version while the 2016 version seemed more grubbily realistic.  Toby's role was more of a tormented man than as a overly confident and somewhat snobbish Charles Laughton.  Both versions were quite enjoyable, but the remake had the advantage of the impact of the earlier.  The challenge of the plot twist was handled very well.

Remakes have inspired some other blogs, but the movies have to be noteworthy. The remake can stand out if it uses clever adaptations.  In some ways a viewer can better appreciate the creative talents involved at both ends.

Between an Agatha Christie worthy Spanish film and a Bollywood remake http://www.therealjohndavidson.com/2019/09/a-masterpiece-film-and-very-good-remake.html

and between a South Korean film copied in the Telegu language about a grandmother regaining her youth.
http://www.therealjohndavidson.com/2019/09/comparing-two-grannies.html

and between a Bollywood film and in the Tamil language about a sperm donor, a comedy with a serious theme
http://www.therealjohndavidson.com/2020/04/vicky-donor-cf-dharala-prabhu.html
Posted by John F Davidson at 9:04 AM