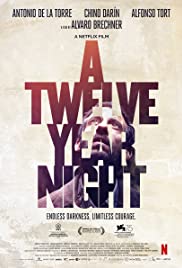 The strength of this movie is psychological.  How can people survive torture?  To some degree all humans battle to maintain sanity which is one reason we accept all sorts of conventions.  Torture is a challenge and makes our fears more concrete.  The movie reveals some history that for most of us is unknown and in danger of being forgotten.   It is well presented.

The movie released in 2018 is set in Uruguay during a military dictatorship.  We are quickly introduced to prisoners being led to an ominous building.  We soon realize these men are going to endure torture.  Over the course of the film we are told the authorities can't kill them, but have instead decided to drive them crazy. One aspect is isolation with the men unable to talk to on another and forbidden to talk to the guards.

A flashback tells why a particular prisoner was not killed.  With a small group of Tupamaro guerilla fighters he had been holed up in a house and finally a soldier had located him and brought a superior to deal with him.  They planned to kill him as they had already done to colleagues, but a civilian authority accompanied him and prevented the killing

How did they maintain sanity.  One of the most memorable moments is when a mother erupts angrily at one of the prisoners who is complaining how badly treated.  She points out they are trying to drive him crazy, but he shouldn't let them.  You are not defeated if still fighting.  Earlier a prison authority mocked him that he was utterly defeated.  The prison's goal is to to induce a feeling of hopelessness

The men stumbled on a primitive communication system by knocking on the wall and developing a code.   They were hungry for information about the outside world.  One message was that ABBA had won the Eurovision contest and one of the responses was "who is ABBA?"  Uruguay was a major soccer power and some messages concerned the World Cup.

One overheard guards talking about romantic problems and offered to help, using his creativity and understanding of how romance works.  Apparently his advice was successful so that even several years later one guard admitted he was still in a relationship.  This only resulted in small favors, but made life more bearable.

Imagination is a tool we all use from time to time.  One prisoner when given a chance to testify to the  Red Cross fantasized telling the truth despite being restrained and anticipating a beating, but in reality he barely got out a word before a guard took him away, followed by two others

At one point given a chance to be examined by a (sympathetic) psychiatrist a prisoner revealed problems that she diagnosed as conditions that could be expected.  One of his comments was that she was the first woman he had seen in several years.  She told him her own story of feeling hopeless and how she overcame it to get back to living.

There are a lot of torture movies, but few bring up the issue of defecation to use the polite version of the word used.  The authorities recognize dignity is effected by restricting privacy and facilities.  The issue is brought to a number of scenes, not too scatological, but the viewer is aware it is used as an element of torture.

They were released after a change in government and after signing statements that they had been treated correctly.  The three focused characters all went on to contribute to Uruguay, one as artist and the two others to prominent political roles.

The film was a joint project involving money and people from Uruguay, Argentina, Spain, France  and Germany.  "A Twelve-Year Night was cited in IMDB with 47 wins and 31 nominations with film festivals and regional awards.

Alvaro Brechner, born in Uruguay was the director and script writer.  He was a prolific film director and writer, mostly in Uruguay.  The original material came from the written material provided by two of the prisoners, Mauricio Rosencoff and Eleuterio Fernandez Huidobro.

Carlos Catalan was the cinematographer with the film shot in Spain and Montivedo, Uruguay.  He had been trained in Barcelona and the United Kingdom.  He has worked in Britain including with a favorite series, "Broadchurch" (2017).  Surprised to learn has done several movies in Bollywood including "Zindagi Na Milegi Dobara" which was mostly filmed in Spain, and also won him two major India awards.  He also won an award for "A Twelve-Year Night".

Irene Bleucua, one of two editors has done numerous films in Spain and Argentina.  The other editor was Nacho Ruiz Capillas has been an editor since 1988 including films such as "The Others" (2001), "The Education of Fairies" (2006), "Agora" (2009) and "White Elephant" (2012).  The two editors shared an award for "A Twelve-Year Night."

Antonio de Jose, born in Spain played Jose Mujica, one of the prisoners and later became president of Uruguay.   He started as a journalist, but always had his foot in acting.  Appeared in "Volver" (2006) and "As Luck Would Have It" (2011).

Chino Darin, born in Argentina played Mauricio Rosenhof.He has made films in Argentina and Spain.  He is the son of one of my favorite actors, Ricardo Darin. http://www.therealjohndavidson.com/2015/04/ricardo-darin-brings-charm-from.html

Alfonso Tort played Ekeyterio Fernandez Huidobro, another prisoner.  Alfonso has been in numerous films in Uruguay and Argentina.

Soledad Villamil, born in Argentina played the psychiatrist.  She is both stately and charming.  She played the leading lady in Oscar winner "The Secret in Their Eyes" (2009)

Silvia Perez Cruz plays the wife of one of the prisoners in a bit role.  A song in the background might not at first be recognized as it is in an unfamiliar format and in Spanish, but gradually is recognized as the "the Sounds of Silence" and English words are used  It is so well used making you feel that although almost hopeless, not quite hopeless. Silvia not only arranged and performed it, but also wrote and performed another song used during the end credits.

My own feelings about torture:  http://www.therealjohndavidson.com/2014/12/torture.html
Posted by John F Davidson at 11:01 AM