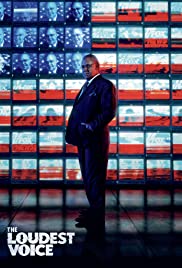 Donald Trump did not get elected in a vacuum.  One of the crucial factors was the support from Fox News and the key reason for its power is Roger Ailes.  Many years ago I recall reading a book written by Ailes which was either on sales or business and it impressed me enough.  The man does get things done.  Years later his name became associated with Fox News which by this time was associated with strong right wing politics.  He claims to have gotten Richard Nixon elected by pointing out the power of television.

My awareness of Fox News, its style and slant on the news came indirectly from many other sources.  A weekly or so check of their website convinced me that Fox News was distorting reality for their own greedy inclinations.

Gabriel Sherman, a reporter decided to write a book and interviewed 600 people, but not Ailes himself.  The book which came out in 2014 was titled "The Loudest Voice in the Room:  How the Brilliant Bombastic Roger Ailes Built Fox News--and Divided Country." It was turned into a 7 part  Tv series under the guidance of Tom McCarthy and Alex Metcalf totaling just under 6 hours and ending just after Trump wins the presidency.  It covers Aile's career from when he was deciding to get involved with Fox News and Rupert Murdoch.

Ailes is portrayed as a dynamic character who built up Fox News from scratch to the dominant cable tv. network.  He did it by targeting a niche and giving them what they wanted.  Ailes strategies included sexism, bullying, harassment, humiliating his opponents, but also he could be charming and self-deprecating.  He browbeated staff to project a strong right wing agenda cherry picking and twisting facts.  Repeating often disproved points such as Obama being a Muslim and born outside the United States convinced many people evil politicians controlled the government..

Rupert Murdoch did not always condone Ailes decisions, but was grateful of him for his overwhelming success.  His son, Lachlan came to hate Ailes and was quoted as saying he came to applaud when Ailes was finally dismissed.  The Murdochs were conservative and appreciated that Ailes had propelled them to cable dominance.

He tried his best to support John McCain and Mitt Romney with their candidacies against Obama, but encountered more success at state and Congressional levels.

He targeted Trump as the one with the most potential of all the primary contenders, but also as the one who could boost Fox ratings.  He was told to treat all the Republican candidates equally, but on one such occasion he is depicted made his next call is to Donald Trump to advise on how to maximize the impact of his elevator announcement.  Basically told Trump how to fill the building by hiring people such as unemployed actors to be there.   He negotiated with Trump  and later discussed with Paul Manafort strategy for the convention.

Trump defended Roger when attacked for sexual harassment, but Ailes was forced to resign before the 2016 election.  The story only continues a short time after showing Roger and his wife watching Trump on tv.  Roger had developed prostrate problems and we are shown incidents of both impotence and incontinence.  He also shown using canes and even a wheelchair.   When sexual charges were made he brutally dismissed them and pointed out the NDA contracts.  Gretchen Carlson sidestepped the intended restrictions after she was dismissed.  In fact her career was permanently  hampered.

This series is impressive (and truly scary) because of the many talented people that contributed.  Here are only a few.

Russell Crowe really plays the lead role.  Won Golden Globe for best actor.   As part of his preparation he interviewed some of Aile' acquaintances.  His mannerisms were mostly  bombastic, but also diplomatic when called for.  Physically he is transformed and his walking made one think of a powerful bear.  He won an Oscar for "Gladiator" (2000). His notable films include:  "A Beautiful Mind" (2000), "The Water Diviner"(2014) and "Fathers and Daughters" 2015).

Roger's wife Beth Ailes was played by Sienna Miller, a woman who stood by Roger and had denied all the charges against him which at times must have been very difficult.   Had originally been cast as Maid Marion opposite, Robin Hood, Russell Crowe, but was replaced by Cate Blanchett.  She had ranked high in many fashion lists for her beauty.  Some of her noteworthy films included "Alfie" (2004), "Foxcatcher" (2014), "The Lost City of Z" (2016) and "Cat on a Hot Tin Roof" (2018).

Is there a solution to misinformation being used to effect political (and social) outcomes?  The problem is both institutional and humanistic.  The First Amendment allows people to express any opinion provided it is not used for force, fraud or defamation.  Facts are sometimes tricky things to pin down and can be used to support a wide variety of views.  Human nature is the real core of the problem.  We have evolved to fight or flee.  We are distrustful of others and seek out people like ourselves.  Society has also evolved to more complexity than ever with some people having access to controls never conceived of before.

Education is critical, but has many political controls.  Universities pride themselves on independent thinking and that needs to be preserved.  Technology and job skills are considered to be the primary purpose of schools.  Critical thinking should be integrated as it supports both aims.  Cultural appreciation in the form of how different cultures have developed and inter acted.  Exchanges should be encouraged.  Respect for education.

A key strategy is to separate opinion from fact.   Of course the same facts can be twisted. to reach different conclusions.  One of my favorite twists was for a sales pitch in which the prospect proclaimed his bad fortune and thus couldn't afford insurance, repositioned by the sales man that he couldn't afford not to have insurance.  Nonetheless facts are the basis for any argument and need to be accurate.  False facts need to be denounced strongly which requires socially and legal tools.  False interpretations are in reality also false facts.  Easier said than done, but needs to be tackled before it becomes too difficult. Education (too often controlled by political forces) needs to be a forceful tool.

Roger Ailes was an exceptional man with strong opinions and abilities.  He used his intelligence and forcefulness for his own ends. There are many others wanting to build on his creation.  Society has become conscious of bully tactics at the school yard level and need to elevate to the worlds of business and politics.  A world in which reason is more respected should be our goal.