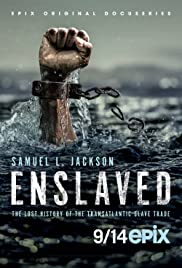 We have just lived through an election where over 72 million Americans voted for Trump who is considered by many to be a racist.  For some his appeal is said to be that whites feel threatened by the increasing demographics and influence of minorities.  African Americans are seen as inferior beings--the inferiority may be difficult for some to pin down, but they are convinced.

The reality is African Americans have been around for centuries and have contributed to the wealth of European settlers all over North and South America.   One group wanting to preserve the heritage of slavery was Diving with a Purpose formed by African American divers who had been asked to help with an archaeological project and have expanded their range and members---including training  to explore sunken ships that proved the presence and treatment of captured Africans.

How did slavery as we know it begin?  The film said Portugal was responsible and brought up the name Henry the Navigator.  Checking further I learned that Prince Henry was neither a navigator or a sailor, but had sponsored many sea expeditions.  He set up a navigation school near Lagos in Portugal.  By 1418 his ships had reached Madeira (where Madeira wine comes from) and by his death the Portuguese reached as far as modern day Sierra Leone.  He sponsored expeditions that captured Africans and brought them back to Portugal.  One of captives was able to negotiate his return in exchange for offering more Africans.  The Portuguese became more involved in slavery originally based in Lagos.  Brazil was the destination for most enslaved Africans with the port of entry being Rio de Janeiro.

What drove slavery?  One example comes when you follow the money.  Tea and coffee tended to be bitter and required sugar to sweeten.  Calculating the cost of sugar and the cost of  slaves.  Indigenous were used first, but died from European diseases.  A good book explaining how slave power increased wealth is "The Half Has Never Been Told."  American capitalism, including banks as well as landowners and manufacturers was boosted very significantly by slavery and I would add stolen land from the indigenous.  More details at:   http://www.therealjohndavidson.com/2016/12/the-half-has-never-been-told.html

Samuel L. Jackson adds his presence attracting more attention even from non blacks.  He acts as an executive producer, but also an interviewer of different experts.  He presented a painted portrait that included Dido Elizabeth Belle, the illegitimate daughter of Captain Sir John Lindsay and a slave.  She was educated and apparently had some small influence in the slow process of abolishing slavery through her Great Uncle, Lord Mansfield and later her husband John Davinier.

The film uncovers many episodes that reveal the hardships of the Africans and the perfidy of many Europeans.  I hope to whet your appetite with a few instances.

In Surinam a Dutch ship, Leusdon missed a turn 1in 737 and in the end barricaded all the slaves on board and sunk the ship to their deaths.  From further exploration we learn more about the price of sugar.  We are shown a machine that cuts sugar cane and learn that a slave sometimes would get his hand stuck in a machine pressing down on the stalks.  When that happened the solution was to chop off the hand so the machine could continue the sugar process.

Bristol, England profited from the slave trade with the family of Edward Colston became very wealthy.  A modern day survey of Bristol reveals many prominent businesses under the Colston name including a large statue honoring him.

Shipwrecks were usually covered by insurance who considered the risks worth it.  Sometimes ship threw slaves overboard to save supplies.  In one case slaves were treated like horses (commodity) It was suspected that some traders concluded they could make money easier from insurance than actually selling the slaves and of course insurance companies were more careful and did not always pay if fraud could be proved

Shipwrecks drove some African slaves to Costa Rica  and after escaping they mixed with indigenous natives.  A Danish scholar traces some Danish slave boats and found one wrecked off the coast.  Divers were able to find Danish dinnerware and to meet some of the natives in the area who had mixed blood.

Another episode pointed out that from Jamaica some escaped slaves were able to join pirates where they received an equal share of booty.  Reggae music originated in Jamaica as protest songs and have spread around the world--I listen to a group in New Zealand.

From some recovered materials from shipwrecks we learn about Fractals which are art designs from Africa that sparked the idea of binary codes which is the basis for modern computers.

The Africans did not all passively accept their kidnapping.  One segment showed specialized chains (manufactured in England )and ship designs to control them.  We learn of ship rebellions with some being  sailed back to Africa.  Amistad rebellion of 1839 was settled in an American court after captives had overturned a Spanish crew in Cuba and had been taken advantage of by Spanish sailors who had sailed to the Long Island area.  They were taken to court, but defended by former president John Quincey Adams and in 1841 sailed back to Sierra Leone.  Many others died fighting and still other committed suicide.

The Underground Railroad was covered with some history of Harriet Tubman who really does deserve her spot on a $5 dollar bill.  Noted that she helped some escaped slaves settle to the St. Catharines area about half an hour from where I write this.  There were many connections along the Great Lakes ships with abolitionists, including Lake Michigan.  The Welland Canal was Canadian on both sides which American ships normally went through to go from Lake Ontario to Lake Erie.

One interesting result of the Underground Railroad was that the ancestors of Ferguson Jenkins, Hall of Fame baseball pitcher had fled to the Chatham area (Blenheim) from crossing at Amherstberg.

Gospel songs were written to help direct slaves.  "Wade through the water" was meant to convey to escapees that they should go through water to throw off the scents of dogs.  Others pointed to the north and some for specific landmarks.  The Banjo was developed by African slaves, but attracted the attention of whites who played the instrument using blackface for the first time.

Abolition was slow in coming.  Most citizens had little idea of the role of African slaves to their economy or of the suffering they underwent.   Some people were aware in England.  Public support diminished after  newspaper campaigns with engravings cartoons.  The slave trade was officially  ended in 1807, but it was not until 1833 that slavery was abolished in all territories controlled by the English, but only after a huge amount was given to slave owners that apparently the loan was not recovered until the 21st century.

In U.S. Civil War Lincoln planned the abolition law which he thought would hasten the end of the conflict,, but wanted a victory before declaring.  Africans were already part of the Union effort and some of them asked for freedom.  After the 12 hour battle at Antietam on September 17, 1862 in which over 23,000 were declared dead, wounded or missing, Lincoln felt confident enough to push the abolition bill through issuing a proclamation on September 22, 1862 to take effect on January 1, 1863.   Africans officially joined the Union Army and Ulysses Grant was able to force a surrender.

The real battle of prejudicial discrimination continued, but progress has been achieved gradually over time.

Dedicated to the memory of John Lewis who had met with them as shown n the last episode.

The best way to undermine prejudice is to better understand the forces that brought people to where they are today.  This series is very good to explain many of the travels and motivations.

P.S.  To emphasize that the battle for acceptance and equality is not yet over I will refer you an earlier blog about an eight year period when blacks did have control in one state their progress was all undone.  In a more recent eight year period we can appreciate that a black president can only do so much and someone else can use resentment to set progress back.  http://www.therealjohndavidson.com/2017/12/we-were-eight-years-in-power.html