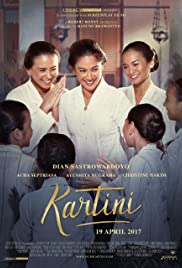 Netflix is helping to make the world a smaller place with bigger minds.  The West has taken the lead in women's rights and to some extent have led women from the third world to more power.   Watching the struggles from an earlier time and a far away place helps one appreciate the obstacles better.  Kartini...." 2017) from Indonesia offers a view of one women's efforts to free herself from a rigid social structure that many of us cannot imagine.

Colonial powers are not often thought of as bringing benefits to the lands they had conquered.  In a real sense they have gained more than they gave.  In the English speaking world we might  not be very aware that the Dutch were a major colonial power.  They controlled much of what we know as Indonesia, one of the largest populations in the world.  In this film they appear benevolent and tolerant, but a documentary seen while writing this blog points out the Dutch were also heavily involved in slavery and just as cold calculating and cruel as anyone else.

Kartini grew up in a privileged family in Java, but that came with restrictions.  She had a brother who steered her to more knowledge and she made contact with Dutch educated women who encouraged her.  There was resistance from her extended family but gradually progress was made.

Women were not allowed higher education.  When they started menstruation women like Kartini were secluded from outside contact.  They could be forced into polygamous marriages at an early age.  Deference to a hierarchy of powers was expected.  One example was women approaching royalty crouched and walking in a very awkward manner.

Kartina was able to talk to a Muslim scholar and learned that he considered it a duty for both men and women to seek more knowledge.  He pointed out that most Muslims preferred to read the Quar'an in Arabic and failed to understand the full meaning of the words.

She and two of her sisters were able to set up teaching in their home for younger children.  She wrote books and articles that were published in the Netherlands and successfully promoted local engraving which increased her leverage.

In the end she kept being pressured to be married, to a man with a wife.  She finally agreed to the marriage if certain conditions were met--not be asked to perform many of the normal duties of wives such as washing her husband's feet, and to be supported in setting up a school.  Most felt he would not accept these conditions, however when they actually met it turned out his now deceased wife had admired Kartini and wanted her children to be taught by her.  He agreed and they were married and she was able to set up a school.

Robert Ronny, the producer and co-writer had graduated from the New York Film Academy and returned to Indonesia.  He wrote, directed and produced many movies and tv shows.   He formed Legacy Pictures, a production house to put out quality films in 2014.  An award winner.

Hanung Bramatyo, the director and co-writer  got his start as director in 1998 with a short film, "Tlutor" that won a local award.  His first feature film was in 2004.  He did mainly romantic, teenage dramas, sports films.  In 2011 he directed a film, "Tande Tanyo? that dealt with 3 different religions in a pluralistic manner, attracting some criticism.  He once said he wanted to be known as "a fighter against stupidity and ignorance."

The cinematography is by Fauzan Rizal.  An ocean sequence is captivating and there are other examples.  His work on this film was nominated for a national award.  He directed "Habibie and Ainun" (2012) which is one of my favorite films seen this year.

Pleasant background music was provided by veteran composers, Charlie Meliala and Andi Rianto.   At the end credits is a tune by popular song writer, Mellyn Goleslaw, joined by Gita Gatawi.  You can listen to it here:  https://www.youtube.com/watch?v=0C0ZtMMmi5c

There are some interesting edit cuts which were handled by Wawan I. Wabowo.  He had been nominated for a national award for his work on "Kartini and also "Habibie and Ainun."

Dian Sastrowardoyo played the lead role handsomely.  She had to play a submissive young woman who asserted her will in male structured world.  She was a cover girl winner for a teenage magazine in 1996.  In 2005 at an Asian regional festival held in France she won an award as most promising newcomer.  In 2009 she started a foundation to promote education, women empowerment and Indonesian culture.  She has played a variety of roles, romantic, a refugee, and an assassin.

During the pandemic it seems our world is closing in on us, but thanks to modern technology we have access to a much wider world.  It is my sincere belief you can expand your mind by searching out the best the rest of the world has to offer.  In the way of film entertainment "Kartina'"is a good example.  This is my second Indonesian film enjoyed this year, but thanks to Netflix and my local library I have visited many other nations.