What about those "hicks" 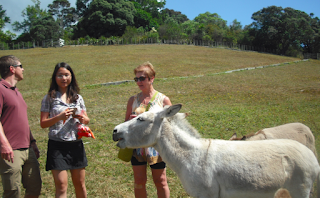 A tv pundit before the election pointed out that many liberals who would be aghast at prejudice against blacks, gays or other minorities really look down upon rural residents.  Michael Ignatieff author and former leader of the Canadian Liberal Party realized the biggest divide in Canada was between rural and urban citizens.  Read more: http://www.therealjohndavidson.com/2014/04/fire-and-ashes-by-michael-ignatieff.html

I lived in a small, but well off city Oshawa until my last two years of high school which were completed in Haliburton, a touristy rural area. Afterwards visited my parents for a few years and had one friend still there, but when my parents moved I only visited as a salesman.

At the University of Guelph, known for its agriculture and veterinarian programs I of course met lots of Aggie students.  They were not at all stupid, or unsophisticated (for the most part).  After graduating and several jobs I found myself as a salesman who very often worked in small towns and rural areas as my prospects were mainly pet stores, feed stores,veterinarians and tack shops.  I found more success in smaller centres, partly because I felt more comfortable.  In the cities the buyers were hardened to sales people as they saw many, many of whom were aggressive.   In smaller areas many of the buyers seemed grateful that someone would take the trouble to visit them.

Were there other differences?  Certainly.  Country music which I had avoided was popular.  Gun culture was more noticeable, but connected to hunting.  A big difference was that most people did not lock their house or car doors.  Everybody knew everybody and in general were more friendly.  I found myself liking some country music, tolerated friends who liked to hunt and adapted in other ways.  My urban girl friend (now my wife) was shocked at my casual attitude about going outdoors in the dark.  More thoughts from my experiences:http://www.therealjohndavidson.com/2014/10/the-rural-urban-divide.html

A couple of developments highlighted some differences between rural and urban citizens.  A few years back the Ontario government which was Liberal decided they would shut down some gambling sites located at racetracks known as Slots.  They had been a source of money for the racetracks (and local municipalities, etc.) and had propped up horse owners and race track employees.  This was very upsetting to the race horse trade as it was threatening to jobs and breeding programs.  The government maintained that it only hurt fat cat owners, but in fact it threatened about 50,000 workers and many municipal budgets.  Apparently the provincial government had been lobbied by American casino interests who were hurt by the racetrack competition, most notably in Windsor, Sarnia and Fort Erie, all border towns.  The Slots policy had little impact on Liberal voters who were mostly located in urban voting districts.  The rural areas were mostly strong Conservative voting areas.  At the time the Liberal party was not hurt by this policy.

To any Americans it should be noted that the labels liberal and conservative did indicate political party preferences, but there was overlap at the party level with many voters of both parties being centrists.  The socialist party, the New Democrats were also strongest in urban centres and were not as concerned about the racetrack impacts.

Another interesting difference was noted when I got involved with selling tooth brushes for dogs.  As you might imagine it was a hard sell.  Strangely I had more success in urban areas where many city dwellers could understand the health advantages of brushing the teeth of their beloved pets.  I later learned there were social benefits that would reduce dog bites.  Still most city people felt the idea of sticking their hands in a dog's mouth was yucky.  Rural people, especially farmers saw no problem with handling animals in their mouths, but thought the brushing idea ridiculous and I got laughed at a lot.  They were hardened to treating animals as commodities for either food or work.   Read more:  http://www.therealjohndavidson.com/2011/06/rural-and-urban-contrasts-towards-pets.html

I am now well past my  high school years and the world has changed.  But one trend is still happening and that is urbanization.  With that, many rural migrants feel they have lost something and a few urban dwellers tire of the rat race.  With the mass media we all are little more turned on by country music trends.  Urban crime (in the media) especially in the States has many people concerned about protection.

I remember reading a book by Norman Vincent Peale where he pointed out that in cities it is easier for people to find other like minded people than it is in rural areas.  My last two years of high school reinforced this notion.  Most of the students were bused in from a huge area and that restricted after school activities.  My basketball team attracted those who walked to school (like myself) and those with parents/friends who could drive them after games and practices.  I found myself socializing with a wider range of ages than I had in the city.  Young people were aware of many city attractions and many yearned to leave for the city lights and jobs.  Often a student would find in universities and colleges new ideas not compatible with their upbringing.

Looking at the United States the rural urban divide is very real.  The Constitution has made small states and rural areas disproportionately powerful and it has caused the majority of voters, losses they find hard to accept.  One example would be the composition of the Supreme Court that has been set to the advantage of small states and rural voters.  That one institution has rippling effects concerning gun rights, abortions, welfare, elections and voting rights, etc.  Some would argue that such power hurts everyone.

Rural people are not stupid, and contribute to the welfare of urbanites that are not always appreciated.  Food is one very obvious one and many city dwellers have little idea where their packaged food comes from.  A slower pace of life in an insane world has its merits.  I once worked for a company that discovered that their best managers came from small towns and rural areas which is how I got hired.  Country people are thought to have a good work ethic.

In Canada we have had exchange programs where French and English students live in another language.  On an international scale student have lived in foreign countries.  These exchange programs help us understand other people.  Many urban children would have their eyes opened by more contact with their rural citizens.  At the time when my parents "forced" me to move to a small town in a rural area I was very resentful, but looking back it was one of most important moves of my life.  We would all benefit if we could better understand those country hicks or city slickers.

The photo is of city folks visiting a rural area.