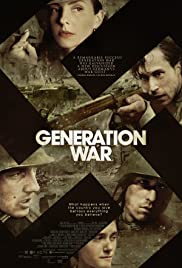 The German view of World War II is different than that for those of us on the other side.  They initiated the war and were cocksure they would win.  Their shame is not only the humiliating loss but also the Holocaust.  Many films over the years have dealt with the reality that so many wanted to deny, but this one in 2013 was a breakthrough that has unleashed other efforts.   This was a 3 part tv. mini series.  The special features included an interesting discussion of the movie.

The process started in 2005 with three years worth of research.  The writer Stefan Kolditz interviewed people alive at the time and studied diaries mainly of common soldiers as this film was intended to reflect those below decision makers.   There was a lot of resistance to talking about it, but a lot of material was gathered.  The film crew were able to attract the largest budget for a German tv. series in the past twenty years.  There were lots of technical problems, but good co-operation from the financiers.   The series finally became public in 2013.

They chose to do the Russian scenes in Lithuania and picked one section that had a history of heavy snowfall, but when they went to shoot winter battle scenes, the snow was disappointing and they ended up waiting another year to get the effect they wanted.  As they got into the editing they realized that the times were not delineated properly and they decided to use archived films with the dates noted.

In 1975 the French had done a movie  "Le vieyx fusil"--The Old Gun)that was truthful about the war.  In East Germany it was uncut and subtitled realistically, but in West Germany it had had some cuts to avoid upsetting Germans.  The producers wanted to present something truthful, including both German and Russian cruelties, but the financiers were nervous.  When it finally came out, it started a lot of conversations among the children and grandchildren of the veterans.  It also started conversations in Poland.

The writer recalled his own youth in East Germany where music played a role in his youth and decided that swing music provided a logical opening to depict carefree young people just before they were about to be immersed in the war efforts.  Swing music was forbidden and monitored by the authorities.  One of the characters was called in for her interest in the swing dancing.

The opening is with three men, two brothers off to war, the third a Jewish tailor plus two women. The tailor's girlfriend is an entertainer who ends up in a relationship with German leader (unfaithful to his wife) to get a pass for her boyfriend, but he ends up in custody anyway and later escapes  The other woman in love with the older of the brothers is planning to be a nurse at the war front.  They are united by a love of swing music which gives them a confrontation with the law.   A lot of very rough things happen over the next five years.  Many felt betrayed, but were unable to express defeatism.   A spoiler alert is that only 3 get together after the war and each of the two romances was broken.

The Russians were demanding a second front and thought through France was the most logical and would relieve the most pressure on them the quickest.  The Allies felt that was unrealistic and opted to start in North Africa and work their way up the Italian Peninsula.  In the end this allowed the Russians to capture huge parts of Europe and develop their own Iron Curtain.

Anti Jewish sentiment wasn't just from the Germans as many partisans were viciously anti semitic and extended to all classes.  One of the main characters betrays a Jew and later regrets it.

Benjamin Benedict,  a producer, who spoke French and German during the special features discussion had won awards for other tv. mini series and also for this series.  Another award winning series was "Der Turm" (2014)  He has also written scripts for tv.

Phillip Kadelbach, the director has won several awards for this film including the International Emmy award.  He also directed "Hindenberg:  The Last Flight" (2011) for English speaking television.

Stefan Kolditz, the writer had been in the East German army and even wrote two scripts while there.

Fabian Romer composed the music covering a wide range of emotions.  He has been writing music for German movies and television shows since 1995

The cinematography is sometimes stunning. David Slama, born in Prague, studied film in Germany.  He was with the camera crew for  "The Last Temptation of Christ" (1988).

Tom Schilling plays Friedrich Winter.  He once won a scholarship for the Lee Strasberg Academy and spent half a year in New York.   Some of his films include  "Suite Francais" (2014),  "Woman in Gold" 2015), and "Never Look Away "(2018).   In the last one he had the leading role in one of my favorites seen this year.

Ludwig Trepte played the Jewish son urging his parents to leave.  He is the son of a rock star.  He has won numerous awards in German television.

Katharina Schuttler played Greta who had ambitions to be an entertainment star and loved a Jewish man, but became a mistress to a German officer to help her boyfriend.   She performs a few songs in the film. She started acting in films at age 11.   Some of her movies include "Carlos" (2010) "Simon and the Oaks" (2011), "13 Minutes" (2013), and "The King's Choice (2016)

Miriam Stein played Charlotte who became a front line nurse after hardening herself to the realities of war.  She loved Wilhelm, coincidentally (?) she has been in a relationship with the actor Volker Bruch.  Born in Vienna, the daughter of a Swiss actor.  Some of her films include:   "The Foster Boy"(2010), "Young Goethe in Love" (2011) and "Borgia" (2014)

Another actor I didn't appreciate at the time was Mark Waschke who played the character Dorn in all three episodes.  He went on to appear in a few films I enjoyed, especially "The Billion Dollar Code" (2021).

History we are told is written by the victors.  It is good to know that the losers can also write honest history and maybe we can learn from them as well.  Well worth the time.

As is usual I have bolded the moves I have watched.