What is the "Radical Left"

Donald Trump is known for his insults and to his base they reflect something bad.  Lately a favorite insult is to call the Democrats the "Radical Left."  It must be scary or why bother?  But what does it mean? 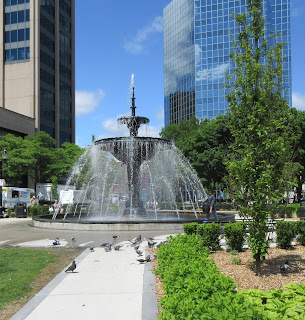 It has been coupled with film about disastrous riots in Venezuela as if that is a good example of a "socialist" or "Radical Left" country.  It is a very bad and misleading example.  Why not use Denmark?  If people looked at the details a little bit closer they might wonder what is so terrible about Denmark?  They are always one of the top five happiest countries in the world when that attribute is measured.  And why wouldn't they be happy--they are well paid, have excellent health care, relatively pollution free.

What does socialism really mean?  It can mean a wide range of systems, but essentially it means co-ordinating the interests of everyone for maximum benefit.  A simple example might be the fire department.  At one point fires were personal disasters that could effect any individual.  People would pool their resources to share the expense of trying to stop fires.  Either volunteers or paid employees would be contacted when a fire broke out and bring equipment and their experience.  Benjamin Franklin was an early advocate.  Fire damage is still a problem, but pooling resources helps keep it under control.

As with any arrangement that distributes political power, including socialism can be corrupted.  It is up to the people to keep it honest, but sometimes the political system itself makes it easier or harder.

Those seeking power in a modern country require money to get elected.  Money helps attract attention and helps shape opinions.  One party is financed by those who like how things are right now and appeals to those who are afraid of change.  We live in an age of inequality.  If we don't change we will die.  The Covid-19 panic is adding to it as small businesses are going under while the well positioned are getting richer.

Obamacare is socialist, but really it is only a step towards what most of the industrialized world already enjoys.  It suits insurance companies and Big Pharma to keep things the way they are. They control the risks.  In all those nations that have adopted national health care programs their life spans are greater than that of the United States plus they spend a lesser percentage of income.  Another bonus is unlike the United States where medical expenses are the number one cause of bankruptcy there is virtually no bankruptcies  due to medical expenses.  An individual may feel they are taken care of, but as the Covid-19 pandemic has demonstrated we are all affected by each other's health.  You could say a national health plan is an essential part of national security.

Fossil fuels still amount to trillions of dollars in the ground and there are some who want their share (and then some).   Unfortunately fossil fuels are bad for your health and bad for climate change.  There are a lot of protesters and opinion writers trying to change things but they do not have the big money clout.   Pollution is deadly, but the oil industry is reluctant to curb asthma fumes.  Part of the cost of producing any product should be cleaning up the mess.  Yes, that means the consumers would have to pay more

Both insurance companies and military recognize climate change but governments find resistance from party donors.  We are all starting to notice increased floods, hurricanes, water rising, fires, heat literally killing people.-  What more proof does one need? Delay is costly not only in lives, but also with money.

Campaign finance reform is not in the interest of the wealthy.  Money is their big weapon and they are getting more sophisticated in using it.  It is hard to believe that corporations (controlled by the wealthy) have the same rights as humans, but an "activist" court can decide.  McConnell has seen to it that there will be more decisions favorable to the wealthy.

Food inspectors are protecting your health, but all too often are victims whenever budgets need to be trimmed including after tax cuts for the wealthy

Unions have been beaten down, a source of pride for Ronald Reagan.  They not only help to lessen inequality they also provide safer and happier work environments.  Germany, as one example has prospered by including labor in management decisions.

Regulated capitalism can work, but with dashes of socialism.  The problem with unregulated capitalism is the steady concentration of wealth.  Being smart and working hard should be rewarded, but there is often an element of luck and certainly without support from consumers few would be as powerful as today's billionaires.  Capital is initially created by labour (and smart ideas).

To counter the charges of "radical socialism" I would suggest "unbridled capitalism" which is really what some wealthy people are striving for.  Regulations are mostly "protections" against health and financial risks that unfortunately cut into the profits.

Words have power and can tools or weapons.  One man who understands this is George Lakoff.  Read more so we use words as tools.  http://www.therealjohndavidson.com/2017/07/george-lakoff-wants-to-reform.html