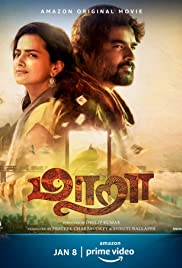 My expectations were very low and sometimes it works out they were greatly exceeded.  "Maara" (2021) was new on Prime and as I felt in need of something different checked it out

A lot of good movies start off in a confusing manner and you wonder if will make any sense or be worth your time. One purpose of this blog is to assure you this movie is worth the effort--at least for some of you (the more discerning ones??).

It starts with a restless young girl on a train during heavy rain.  A woman in a seat opposite the aisle offers a story to help calm her down.  The viewer is treated to an animated version.  The young girl is mesmerized.  Years later we learn she has become a restoration architect and is being coerced into an arranged marriage.  But she goes on a last quest in her restorative activities.  In a far location she notices murals that seem to depict the fairy tale.  In truth my interest picked up as they are beautiful and I started to notice the musical background and the story.

She tries to find the man who did the paintings. The man, Maara is very elusive, but seems to be helping people all the time.  Eventually the woman reaches a sort of farm resort where he is supposed to live and more stories come out of it  Eventually the stories are netted together including the original fairy tale, but linked to a romance, two actually.

The feeling is like an interesting fairy tale, but for adults who love confusion being sorted out it is very satisfying, although in the end you are not quite sure how the lovers keep together, but you feel good.

Madhavan was in one of the first Bollywood movies I saw, only it wasn't Bollywood and I discovered years later it was actually in Tamil , "A Peck on the Cheek"  I noticed him in Bollywood movies which further confused me.  It turns out he was popular and talented and was in demand.  That confusion led me into a whole bunch of movies in a variety of languages of India.  http://www.therealjohndavidson.com/2017/01/regional-films-from-india.html

Exploring my home town during the Pandemic I discovered lots of murals, but for the most part they were separate from one another, but in this film the paintings were contiguous on many buildings and very gorgeous in variety of colours.  The music was gentle, but unique.

This was a remake of "Charlie" (2015) in Malayalam with one of my favorite actresses, Parvarthy Thiruvothu.  It has a similar IMDB rating and won awards including for Parvathy and Dulquer Salaam.

The Tamil rights to the film were obtained in 2015, but there were a lot of changes and delays.  Filming was partially completed before the Covid-19 Pandemic caused another delay.  Originally Dhilip Kumar was hired to write a script which ended up an adaptation.  Then when the original director left the project Dhilip Kumar was hired to direct.  He had directed an earlier short film with the same producers Prateek Chakravorty and Shruti Nallopa.

The background music and several songs written by Ghibran.  Cinematography by Dinesh Krishnan and Karthik Muthukumar and it is also intrugueing.  Edited by Bhuvan Srinivasan who probably helped sort out the early (but deliberate) confusion.

Madhavan played the title character.  At age 18 his college entrusted him to as cultural ambassador to Canada representing India.  He had won national public speaking awards and is fluent in English, Hindi and Tamil.  He has appeared in such other films as "Rang de Basanti" (2006), "Guru" (2007) and "3 Idiots" (2009) which were all exceptional movies.

Shaddra Srinath played the young woman wanting to know more about the painted murals that were of the story she heard as a young girl on train ride.  She had appeared in an awarding winning film with Madhaven, " Vikram Vedha (2017).

I admire Netflix for grabbing a lot of foreign films, realizing a big part of their motive  is to get foreigners and immigrants.  Some English only speakers will eventually realize this is a gold mine of entertainment and understanding.