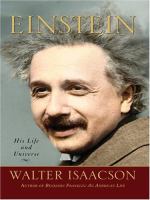 Few of us really understand Einstein's theories, but we have all been affected by his thinking.  This post is not intended to explain his theories as frankly I have only a crude understanding.  He surely was a genius, but was more than that.

It has often been reported that he was slow to talk as an infant.  His parents were educated and he was encouraged to learn in his youth.  He was an exceptional student, but he rubbed some teachers the wrong way.  He was lucky to get a job in a Swiss patent office.

He had a vivid imagination and a talent for physics, but not at the same level for mathematics.  He did take his job seriously, but it also left him with a lot of time for theoretical thinking.  A lot of what he is remembered for happened while he worked at a low level position.  He was in contact with those he had met while in school.

He did not reach fame until one of his calculations was confirmed by a total eclipse of the sun in 1919 and we can think the powers that be that the war was over.  His main claim to fame is the equation e=mc2.  At the time it wasn't thought so much for practical uses (such as a bomb), but with his other theoretical thinking did advance our understanding of how the universe works.

After he became well known getting academic jobs was much easier.   He became a professor in Berlin, Germany and developed contacts among the physics elite including Niels Bohr and Max Planck.

Against his parent's wishes he married a Serbian woman,  Mileva Maric who was also a physicist .  After two children (not including another that was uncovered many years later) they divorced.  An interesting detail of his divorce was that several years in advance he promised Mileva that she would get his prize money from the Nobel Prize for which they were both confident.  After several years of being blocked by the Nobel Prize Committee he won in 1921 in a very carefully worded statement avoiding giving credit for a theory.  Essentially he honored the agreement with his wife.

He spent a lot of effort in refuting Quantum physics, although on good terms with some of its strongest advocates.  Neils Bohr  tells us there is randomness, but Einstein resisted that.  Einstein visited Bohr in Copenhagen and during one of their discussions on a bus ride they overshot their destination and after realizing their oversight went back, but overshot their stopping point again.  In arguing against Quantum physics Einstein stated that God <more generally meaning universe maker> would not play with dice to which Bohr replied "don't tell God what to do."  For me this hinges on free will and like Einstein I feel all actions are predictable if you have enough information, but I would like to believe there is some randomness.

Two of Einstein's loves were playing the violin and sailing.  He performed with his violin in public, but also to entertain guests.  He managed to sail, although unable to swim wherever he happened to live.  Both activities were relaxing for him.

A pacifist much of his life he changed his opinion and expressed it after Hitler attained power.  In 1933 he made a move to America, thinking it would only be temporary, but in fact he spent the rest of his life  working from Princeton University.  He helped to found the International Rescue Committee recently headed by David Miliband.  He was against the McCarthy hearings which he felt were like fascists he had encountered in Germany.  The F.B.I. had an extensive file on him with much misinformation  suggesting he was sympathetic to Communism which he explicitly was not.

Einstein gave his support to the Hebrew University, but became concerned over Jewish atitudes regarding Arabs.   As far back as 1929 he voiced such opinions as "Should we be unable to find a way to honest co-operation and honest pacts with the Arabs then we have learned absolutely nothing during over 2,000 years of suffering."

Originally he did not believe that an atom could be split to release the energy he knew to be contained.  Niels Bohr figured an atom could be split.  Another physicist, Leo Szilard became concerned that German scientists would beat the rest of the world and noted they were buying up uranium from the Belgian Congo.  He remembered that Einstein had been friends with the Belgian Queen and felt he might be able to block the German purchases.  He tracked Einstein down while vacationing on Long Island and with Eugene Wisner discussed what should be done.  They went beyond thinking to block German purchases and felt the Americans needed to win the science.  They all agreed that they needed someone with prestige to contact the White House and at first decided on Charles Lindbergh. Lindbergh was actually an isolationist (and Nazi sympathizer) and the group looked elsewhere.  It took a chain of events before a letter reached the attention of President Roosevelt with Einstein's signature.  He wanted no further involvement, but did occasionally provide some calculations.

Several refugees had a lot to do with the development of the bomb.  Many of them became horrified with what might happen.  Einstein developed the idea that the world needs a suprnational authority to control military power.   He was afraid of nationalist sentiment which too often leads to war.

After his death, by his request his body was cremated and he ashes scattered in a nearby river as he did not want to end up as an object of morbid veneration.  Before cremation his body had been subjected to an autopsy and the pathologist extracted his brain thinking it would be of interest to scientists.  However it was bandied about with little worthy studies coming from it.  In 1999 part of it was sent to McMaster University in Hamilton, Ontario.

How does one come up with new innovative ideas?  Einstein did give some clues.  "A new idea comes suddenly and in a rather intuitive way.  But intuition is nothing but the outcome of earlier intellectual experience."  He was curious and rebellious against regimentation.

Walter Isaacson has written about some pivotal characters and adds to our understanding.   Some of my thoughts on another book of his:  http://www.therealjohndavidson.com/2018/05/leonardo-da-vinci.html