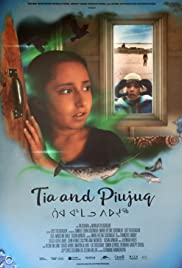 Children's films are not normally a subject for my blogs, but "Tia and Piujuq"(2018) is unique.  It is not a Disney blockbuster.  It is a relatively low budget Canadian film that reflects a mix of cultures.  Personally it illustrates that opening doors (magically or otherwise) enriches us all and it is best to start at younger ages.

There are 4 languages at play, Inukitut, Arabic, French and English.  My version had English subtitles and I was uncertain how they handled the difficulties of communication between the characters.  There seems to be an Inukitut voice over the Arabic conversation while I am watching an English translation

Canada opened its doors to Syrian refugees starting in 2016 who with some struggles are adjusting to new culture while bringing some of their own.  The Inuit are on the margins of most Canadians' consciences, but also are contributing.

The story is really a fantasy that allows a 10 year old Syrian refugee girl to go through a magic door and join up with a 10 year old Inuit girl.  Both have few companions their own age.   Tia's mother is mostly bedridden with a difficult pregnancy.  Piujuq is with her grandmother who reads Inuit stories to both girls and is enhanced by some simple animation.  There is a little adventure involving fantasy characters, but it is a cover to let the viewer appreciate there are a wide range of cultures that we can enjoy.  Simple dialogue aimed at young children.

There is an image from my childhood and sometimes advanced by outsiders that Eskimos live in igloos.   The Inuit in this film live in tents, and have  sewing machines.  Refugees in Canada live in what Grown up problems are mostly not noticed, although it is hard not be concerned about the condition of Tia's mother, but she generally hides her discomfort.

The Director/Writer,  Lucy Tulugarjuk started as an actress with  "Atanjaruat:  The Fast Runner" (2001) and "Maina" (2013).  In 2006 she was involved with "The Journals of Knud Rasmussen" as actress, casting director , dialogue writr and key makeup artist.  After "Tia and Piujuq" she was co-producer for "Restless River' (2019).  She is also the mother who two young children, one of whom is a lead character and the other in a supporting role.

Marie-Helene Cousineau, producer and co-writer for "Tia and Piujuq" worked as a still photograher with Lucy on "Atanjaruat: The Fast Runner."  Marie-Helene has directed, produced and written numerous films.

Samuel Cohn-Cousineau was a third writer for the script.

In addition to Marie-Helene the production team included Susan Avingaq and Francois Landry who have worked together on a number of Arctic film projects.  Madeline Ivalu also has worked with the others and also acted in "The Grizzlies" (2018).  I felt "The Grizzlies" was one of the top films seen this year and is more suitable for adults and older children.  http://www.therealjohndavidson.com/2020/01/an-unexpected-canadian-film-gem.html

Chris Coleman composed some background music in his first venture.  As a few of the crew involved with throat singing there is some of this unique singing included.

It is filmed in Montreal and Igloolik, Nunavut which is quite a contrast.  John Frantz, cinemetographer is with his first film.   Edith Labbe, the other cinematographer has been involved in a variety of capacities with other films.  She was in the sound department for "Congorama" (2006) and as cinematographer for "Reel Injun" (2006)

Our young are the future.  How they start in life has an impact.  Canada is a very big country, literally from coast to coast to coast.  We speak two main languages, but really hundreds more are needed to get the full picture.  In Canada the government has supported indigenous art efforts  APTN is a national network that reflects our indigenous culture as well as making us aware of indigenous cultures in other countries such as Australia, New Zealand and Finland.

Note:  The bolded movie titles are ones that I have viewed.
Posted by John F Davidson at 11:54 AM