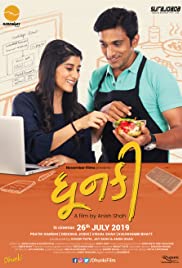 Tension is one of the factors that attracts us to movies and other entertainment.  We experience it vicariously from the safety of our chair and normally it is released.  Action movies provide a lot as do horror movies and even romantic dramas.  For me "Dhunki" (2019) provided a different kind of tension, one closer to home.  This is only my second Gujarati film this year and both seemed worthy of a blog post.

Looking at the poster with a man and a woman my assumption was that it would be a romance and reading the brief description suggested there would be romantic tension.  Slowly as the events unwound it seemed that sort of tension was just over the horizon, but instead a more familiar, but very real tension developed.

On one side is a stable marriage, but we learn the wife, Ankita is frustrated that she can neither buy a house she wants or go on a desired vacation.  On the other side when the husband, Nikunj goes to work we encounter a female co-worker, Shreya (the two on the poster) and learn that she is engaged.  Soon the two are involved in an important sales presentation of technology that goes sour and they both share some responsibility.  The man feels he has been overworked and does not accept total criticism.  Back home his wife delivers a little criticism and express her frustration about having to defer a house and vacation.  He encounters difficulty getting another job as he is over qualified for the ones that would be offered.  A few days later he decides to startup his own business, delivering lunches which is risky and for sure a further postponement of his wife's plans.

His former co-worker re-enters as she admired his intelligence, co-operation and his cooking ability and before too long she has decided to quit her job and not only work with him, but invest some of her own savings.  Her fiancee, Hardik is a doctor intern and a little put off, but tolerant.  The two couples meet a few times and on each occasion Hardik expresses a harsh view of the world, but continues his toleration.   The business encounters obstacles relating to financing and technology.   Shreya's engagement is postponed and later she is asked to make a choice.  Hardik's grandmother is near death and the wedding is re scheduled to be sooner.  Ankita sticks by her husband, but she is aware of Shreya's dilemma and it helps put more pressure on the business.  The two partners criticize each other.

The end is ambiguous as startup businesses are unpredictable.  The tensions between the business partners and with their personal partners seem realistic.  One can appreciate the problems encountered by anyone trying to start a business as hard nosed investors are fearful of the unknown and consumers can be fickle.  An irony at the end is a potential saviour was one who had earlier brutally dismissed their technology presentation.

Anish Shah directed his first feature and co-wrote only his second film.  He is also listed as producer as is his co-writer Kuldip Patel who had previously written and produced a short film.

Siddhart Amit Bhavsar wrote the music which was unobtrusive.  He had been a playback singer

Sreekumar Nair did cinematography and editing.

Niren Bhatt wrote some lyrics for songs and suggested the title.  He has been a writer for popular Hindi tv series and well as some Bollywood movies, "Made In China" (2019) and "Bala" (2019).  Wrote Gujarati scripts for "Wrong Side Raju" (2016) and "Ventilator" (2018).  He has also written lyrics for over 20 films.   Check out "Ventilator" at http://www.therealjohndavidson.com/2020/07/ventilator-serious-movie-with-comic.html

Pratik Gandhi plays Nikunj mostly in a light manner.  This is my 3rd film with him in a lead role all in Gujarati.  The first was "Wrong Side Raju" (2016) and more recently  "Ventilator" (2018).  Most of his films have been in Gujarati, but has been in an English film and Hindi.

Deeksha Joshi plays Shreya.  I had seen her as a marriage counselor in "Shubh Aarambh" (2017) trying to save her future in-laws.  Most of her films have been Gujarati, but she has two Hindi projects in the works.

Vishal Shah plays Hardik, the least likable character, but handles it well.  This is his second film.

Kaushami Bhatt plays Ankita, the loyal, but frustrated wife.  This was her first film, but has gone onto two other Gujarati films.

Jaimini Pathak plays Mr. Shroff and is only in two scenes, but they are critical and his demeanor  is different in each scene.

As a Canadian it has been an education just to appreciate there are many languages in India that offer their own culture.  Gujarati to date has not been noticed, except the four I have seen have all been above average.  Prime Minister Modi is from Gujarati.
Posted by John F Davidson at 8:12 AM