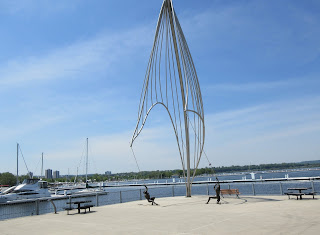 When we get up in the morning most of us have a routine which is a good way to start the day, but sometimes it gets interrupted and our first thought is how to get back to what we were expecting.  A lot of our day is to get through to the next expected thing.

When it comes to things like getting married, getting a job, living a long healthy life, saving up for something more costly than our pay cheque, dealing with an unco-operative foreign nations, or global crises it pays to give some forethought to the matter and generally the more consistent we are in these efforts the more successful are the results.  On a national scale when there are serious problems all eyes and ears go to the leader.  Leaders do all sorts of things that we don't know and don't care about, but when it comes to life and death or our financial survival we look for guidance from our leaders.

The Covid-19 pandemic is one example.  It took quite awhile for Trump to recognize it as a national threat and the first we heard were efforts to dismiss and later to blame others.  We learn he had unpacked some of the preparations made by Obama.  Other nations identified it as a threat and took steps to deal with it.  Trump fairly soon identified it as a threat to his re-election, particularly when it effected job statistics and the stock market, his measures of success.  His focus has been on how to minimize the danger.  One recurring theme was that tests only made the situation worse by revealing more cases.  Other nations realized they needed to get a grip on the real facts before deciding on a course of action.  Instead of taking a tough stance and setting an example he continues to downplay the health dangers.

Lately Trump has come to realize that schools serve as a sort of baby sitter that allows parents to work without worry.   That is true.  But it is more complicated.   Although youngsters are apparently not as vulnerable as healthy adults, they are vulnerable and some are dying plus they are also carriers to those more susceptible.   Their teachers, school janitors, school bus drivers, etc are more vulnerable, but are necessary for children to get the full learning experience.  Parents are protective of their children and would need to be reassured that the danger is manageable, but Trump belittles many guidelines.  Parents are afraid for themselves.

Other leaders intuitively understand that the solution to the problems of the economy has to take a back seat to controlling the virus.  A long term strategy is to listen to experts, keep measuring results and set a good example.  Leaders who fail in this should be kept away from power.

This crisis is only one example, but as one of life and death it will not be ignored by all rational people.  Unfortunately it mirrors other examples.

Tax cuts are a short term action.  Of course everyone likes a little more money in their pocket and it has been constantly promoted that the wealthy are job creators.  First many wealthy people are not big job creators and put their money in safe places such as government bonds which their taxes would have minimized the need for.  Others calculate how they can optimize their profits such as more automation, company buybacks, more dividends and giving themselves raises.

Two impacts are important.  First the deficit grows meaning the government has to borrow more money and pay interest.  Second and related is they have less money to pay for programs and it is all too often programs that benefit the poor, but everyone loses a bit and the government has less flexibility for emergencies.

John Maynard Keynes had the idea that when times were good, the government should maintain taxes and let a surplus develop.  Taxes helped to curb inflation and encourage innovation.  When things inevitably turned down, it was a good time to cut taxes so that consumers would be encouraged to spend more.  Trump and his Republicans ignored that in a short term desire for personal gain.

Climate change is another area for long term thinking.  A short term strategy employed by those in power is to optimize profits from fossil fuels.  A long term strategy would require re structuring and inconvenience for many.  But if not done the long term result would be disastrous.  It is one of those things where the expenses for necessary changes increases exponentially the longer they are ignored.

Along the same line is pollution control.  Pollution cleanup should be paid for by the ones who create it, but such cleanup would raise prices or cut profits.  De-regulation is a regular promise of Republicans, but in most cases they really want to do away with protections.  The real costs of pollution include life threatening disease.

Racist immigration policies may make some of his base happy, but there are long term consequences.  To others, not necessarily racists he is appealing to their fears of terrorism.  Americans, like most modern industrial economies are not replacing themselves and so with an aging population there are fewer people to perform taken for granted services.  Plus there are many jobs considered undignified.  At the other end technology experts are coming from Third World Countries.  If a door is closed people look for alternatives.  Canada has been one of the beneficiaries, but there are others.

When the inadequacies of short term solutions become more obvious hopefully there is still time to plan long term.

the photo is from an installation by Edwin Dam and Veronica De Nogales at Hamilton Harbour.
Posted by John F Davidson at 6:48 AM