Nollywood may seem a weird name, but if you watch movies expect to hear and see more of it.  Netflix has started offering movies from Nigeria.  Nigeria is the most populous country in Africa and has a diaspora that is being recognized in professional circles around the globe.  Nigeria is now the second most prolific nation for film production.

The term "Nollywood" was traced back to a New York Times article where a journalist was commenting that their budgets were so low that in fact they were "Nothing Wood."  For many years low budgets did result in poor lighting, sound and other technical film aspects.  Others accept that Nollywood borrowed its nomenclature from Hollywood and Bollywood.

India was much larger with more advanced urbanization was able to establish its own cinematic history that has carried forth with its diaspora and many of its films have done well in Britain.  The French when they left their African colonies made an effort to maintain local cinema and film making capacity but not so much for the British in Africa.  With many languages, their British overlords drew boundaries that most suited them and brought English as a common language.

In 1957 "Fincho" became the first Nigerian film in colour.  In the 1960's, Yoruba traveling theatre groups began filming some of their plays.  By the 1990's Hausa groups began affiliating with Bollywood connections.   In 1992, "Living in Bondage" in the Igbo language was marked as the beginning of Nollywood, although many with good reason think it was much earlier.

In the 1990's global economic problems made access to foreign films almost impossible.  Entrepreneurs took advantage of the opportunity to set up distribution system for VHS productions.  Some films could sell 50,000 copies in a few weeks for the equivalent of $1 to $2 each, but also competed with counterfeit copies.  Despite all the difficulties they have been developing the skills necessary to compete at a higher level.

Nigerian film makers have formed alliances with Ghana film makers which are also mostly in English.  Ghana has accepted that many of their films are considered Nollywood.

In 2013 there was a joint Nigerian-United Kingdom film, "Half of a Yellow Sun," with British stars, Chiwetel Ejiofar (of Nigerian parentage) and Thandie Newton and established Nigerian actors including Genevieve Nnaji.  The original novel was written by a Nigerian, Chimamanda Ngozi Adichie and the movie was scripted and directed by veteran Nigerian film maker Biyi Bandele.

"Half of a Yellow Sun" concerned the Biafra War, a civil war only seven years after Nigeria declared its independence.  I remember campaigns in my university years, 1967 to 1970 but only vaguely understood, then completely forgotten.  My vague memory is that people were trying to raise money for starving children. Many years later I learn that starvation was part of the Nigerian government's strategy to crush the Biafran rebels.  The English also acted against the separatist government.  The country stayed united and not without stresses and problems appears to be developing a national identity.

In 2015, Netflix started offering Nollywood films and in 2019 got involved in production.  Youtube also had Nigerian films on their website.

Watching a few selections from Netflix I have found myself compelled  to follow the story.  The stories are interesting enough, with honest dialogue and the characters are believable compared to what was imagined and the cinematography and sound are more natural (more professional).  As usual when watching foreign movies the differences and similarities stick out--there are modern looking cities, houses, etc.  Roughly there is  50/50 split between Muslims and Christians and that is visible in many films.

Most of the dialogue is in English, although some of it might be described as pidgin and some is in Yoruba, Hausa.or Igbo.   Often subtitles are labeled with the language which even if you don't understand lets you realize there is some sort of communication issue with the parties involved.

Here are a few of my observations of recently viewed Nollywood films.  I found some enjoyment in each and some were very engaging.

"In My Country" (2019) is a real gem--takes a bit to set up the main drama, but everything relates back--lead actress, Okawa Shaznay born and educated in Cameroon (a Francophone country) has also appeared in movies in Ghana.  The director also directed films in Ghana

Light in the Dark" (2020) is for me one of years best.  It is a sensitive story about what happens after a robbery includes a rape that sews discord between wife and husband.  Also touches on inter tribal relations.  The main actors are outstanding with good supporting cast.  The directing, editing, cinematography, etc. are professional to help execute the story with this underlying complex emotions.

"Up North" (2019) is set up in the northern part and involved with Muslim women competing in sports.  The central focus is on a spoiled rich son who learns there is more to life.

"Elevator Baby"(2019) spoiled middle class kid gets stuck in elevator with woman in labour.  An interesting complication is the kid's mother's mature boyfriend is a doctor that is resented by protagonist.  There, I gave it away, but it is well done and engaging.

"4th Republic" (2019) is about a rigged election.  Nigeria is noted for corruption and this is a fictional case that also brings in a woman striving to gain her actual victory,

"Kasanova" (2019) is a romance comedy when a father and son develop relationships with mother and daughter.  Naturally there are misunderstandings, but some good dialogue. 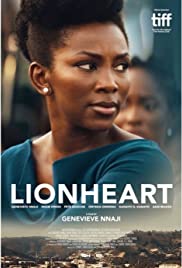 In "Lionheart" (2019)  Genevieve Nnaji became the first female director of a Nigerian feature film.  This film premiered at TIFF and was submitted for the Oscar international film award, but was rejected because most of the dialogue was in English.  It became the first Netflix original film.  Genevieve had a successful career as an actress including winning the first best actress award at the African Movie Academy in 2005.  She produced a film in 2015.  She has been active against forced and early marriages and contributes a percentage of her income to charities.   Corporate shenanigans fill the plot with a strong woman being sidelined by a lovable and somewhat liberated uncle, but traditional.   The plot allows that uncle to make the most critical decisions to avert a disaster.  Genevieve is also the lead actress and one can appreciate what a driving force she has become


"The Arbitration"  is about legal arguments over a sexual assault with corporate  repercussions.  There are a few twists.  Beverly Naya (see below) has a supporting role as the bitchy wife of the antagonist.

"The Royal Hibiscus Hotel" (2017) is a conventional romance which most romance lovers (such as myself) would enjoy.

"Isoken" (2017) has an inter-racial romance, but with little of the difficulties one would expect.

"Banana Island Ghost" (2017) is a fantasy with a higher than average rating.  A man dies and complains that he hadn't found his "soul mate" and thus was afforded a chance to find one.  A different perspective on  physical beauty.  His soul mate was a large woman with a large bum.    The heroine of  "The Number1 Detective Agency" set in Botswana" was also a large woman who attributed some of her success to over sized backside.

I wish had seen "Skin (2019) at the beginning of his project.  A documentary by established Nigerian star, Beverly Naya who was concerned about attitude towards color.  Beverly has also starred in Canadian productions.  She talked to a dermatologist who was most concerned about a healthy skin.  A photographer explained that film stock based on white preference.  Many commented that men seem to prefer lighter skinned women.  In movies lighter skinned women were preferred, but one complaint from a half black actress was that she wasn't dark enough for some roles.  Over 70% of Nigerian women use skin lighteners and it was demonstrated there was a big difference in quality that often resulted in blemishes.  Other retailer boasted that they achieved a better skin balance.  I was pleased to learn that Genevieve Nnaji was cited as one of three successful Nigerian actresses that avoided skin lightening.

The film industry supports 5% of Nigerian GDP and is the third biggest employer.  Nigeria produces about 2,500 films a year, beaten only by India.

In Conclusion:  keep an open mind.  Things are happening in Africa and Nigeria will be one of the leaders.  Nollywood is both entertaining and educational. You will find differences that will widen your horizons, but also similarities that will deepen your understanding.
Posted by John F Davidson at 8:17 AM