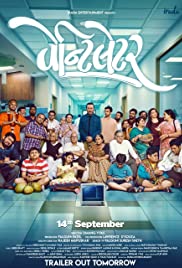 We are all more familiar with the term "ventilator" than we were a few months ago.  It represents a life saving device or a desperate effort.  This Gujarti version of "Ventilator" is a remake of a Marathi original that I heard of a few years back because of the involvement of Priyanka Chopra.  I did not see that, but bought an iTunes song from it.

It is listed as a comedy and drama, but I would say the comedy is of the relief type as the drama is too heavy to dwell on, at least that is human nature.  A man's life is on the line and the family gathers.  We really don't see the man, but are intermittently reminded of him.  Much of the family is consumed with petty issues such as blocked up toilet sewage, a local religious festival with a last minute requested change, and malnourished coconut plants.  More seriously we become aware of family resentments, particularly between two sets of fathers and sons.

As death appears closer the eldest son is asked whether he wants to continue with the ventilator and at first he says no.  His sister resists and there is a bit of a feminist point made that ends up with a compromise to keep the ventilator plugged in for a few more hours.  Everyone seems to accept the decision, although not all are pleased.

The father-son conflicts become more apparent.  It hit me personally as it might other men.  For much of my youth I resented my father as he seemed to be the one stopping me from doing what I wanted to do.  I overlooked the many things he did for me, although as I became an adult I appreciated that he had his own problems and had made an effort to steer me in the right direction.  Cultural attitudes have changed and I realized my father did actually display his love in many small ways, but now days it would be much easier.  A theme of the movie was that a father's love is difficult to express and without saying it meant in comparison to a mother's love.

The ending is not a big surprise, but I was caught off guard with a comparison to an incubator for a premature born baby.  Life is precarious at both ends and not to be taken for granted anywhere in between.  Set in India and having watched dozens of Bollywood movies I was expecting that there would be planning for the traditional first born son to light the funeral pyre for a cremation, but the talk seemed more modernized.

The film brought up organ donations and made the point that lives are saved.  I even learned it is possible to donate parts of the body I was unaware of.  I have signed a form inspired by a friend of my father in law who received a heart transplant and went on to outlive both my father-in-law and his own brother who spent a lot of time worrying about the imminent death.

A few notes about the movie production.   The comic aspects seemed annoying at times, but they were included perhaps to demonstrate how petty we all are a lot of the time.  It also set us up for an emotional reaction both to the family tensions and an imminent death.  In the end the viewer is left with some uplifted feelings.

Another interesting ploy was to use one family member as flying in from the United States with his young son.  The young son apparently only spoke English and asked some maybe unintentional probing questions that moved the story along and illustrated that immigration has a price.

The Gujarti language has produced few movies that have reached my attention, but this one borrowed two familiar Bollywood actors.  Apparently Jackie Shroff's first language is Gujarti, but this was his first in that language after a long successful career as a Bollywood, mostly action star.  Some of his films include, "Mission Kashmir" (2000), "Devdas" (2002),  "3 Deewarein" (2003) and "Dhoom 3" (2013).  He plays himself as an action movie star that even the relatives gawk over.  He shows an emotional depth as one of the resentful sons, but devoted to his relatives.

The other Bollywood loan was of Juhi Chawla in a somewhat comic cameo.  She did raise the feminist issue.  As a former Miss India she once played the romantic lead in a number of movies.   Her hits include "Yes Boss" (1997), "Duplicate" (1998),  "3 Deewarein" (2003) and "My Brother...Nikhil" ( 2005).  She formed a partnership with Shah Rukh Khah that led to Red Chillies Entertainment that was involved with this production.  Juhi does have a comic touch, but is also very good in mature roles.  Lately her talents seem to be used mostly in comic roles, although she had had some involvement as a producer and has selected some socially relevant roles.

First time director was Umang Vyas who had done some assistant directing and acting with Bollywood films.

Niren Bhatt was a co-writer that had done "Wrong Side Raju" (2016) a Gujarti film and a Bollywood movie I will be blogging about but haven't yet seen,"Bala" (2019)

Karan Vyas was also co-writer who has written  and been associate director with"Wrong Side Raju" (2016),   and "Made in China" (2019) a Bollywood production.