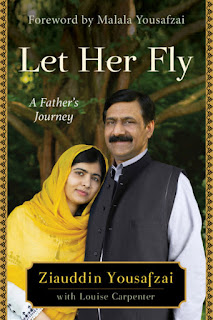 Malala has deservedly gotten the attention of the world, me included.  But she didn't emerge from a vacuum.  Her family, especially her father played an irreplaceable role.   Ziauddin Yousafzai came to the  Hamilton Public Library and when asked what he did, mainly he advised "Don't clip her wings."  He did more than that but his idea was that we all have potential, but too often society imposes restrictions.

Ziauddin might best be described as an educational activist.  He started a school from scratch (3 students) and developed it with both boys and girls up to 1100 students in the Swat Valley, Pakistan.  His foundation started a medical school in Karachi.  He now serves on various committees and travels to promote education worldwide for females.

We were entertained by a local sitar player and his tabla playing son.

Ziauddin then read a brief section of his book dedicated to his wife and 5 sisters.  He sat down for an interview and also took questions from the audience.  Asked about a recent Canadian report regarding missing and murdered indigenous women he admitted his knowledge was scant, but one of the things he said was if all women were respected these sorts of things would not happen.

During his speech he occasionally had trouble with a few words.  In his book he wrote about a stammering problem he had as a youth and confessed that even after much effort he still has trouble once in a awhile.  He didn't let it stop him from being a teacher or a spokesman for world peace.  For society to overcome prejudice, education was needed to overcome.  He qualified by adding if still prejudiced, the person had not received a quality education.

Asked about how her two brothers felt about Malala he recalled when her younger brother asked what it is like to have her as his sister he replied he couldn't imagine what it would be like for her not to be his sister.

When Ziauddin was growing up he lived in an environment lop sided in favor of men and it seemed natural to him.  The role of women was as servants to men; father, son and brothers.   As a teenager one of his cousins was a victim of an honor killing.  This helped to wake him up to the basic unfairness of inequality.

Before his marriage he wanted to be a teacher and needed to get more pupils to justify his marriage.  At first he was also the janitor and the accountant.  He tried mixing boys and girls but there were so many complaints that he did separate them.  Before his departure he had over 1100 students.

The Taliban started causing problems in 2007 with girls' education a major target.  There was a ban on girls' education on January 15, 2009.  The government fought back, but Ziauddin received death threats.  Some of his friends were beheaded.  He carried on as best he could including secret classes for some students.  Malala was outspoken with her father's encouragement and drawing wide attention.

She was shot in the head October 9, 2012.  There was fear for her life and then fear for her mental faculties, but miraculously she not only survived, but maintained her abilities.

After the shooting, the surgeon who provided medical care while still in Pakistan was Dr. Fiona Reynolds who was from Birmingham, England where Malala was transported for further treatment.  Dr Fiona kept up a relationship with the family spending a lot of time with the two sons, Khushal and Atal who in many ways adapted faster than their parents.

Toor Pekai, Malala's mother had been fairly independent in Pakistan, but in England she was restricted because she couldn't speak English.  This was overcome with the help of tutoring and Ziauddin gave a few examples of how she managed to adapt.  I would like to add that she accompanied her husband at the Hamilton meeting.

Malala's history is fairly well known.  She was asked to speak at the United Nations and after accepting received encouragement from many quarters.  The children of Benazir Bhutto sent her some of their mother's scarves and Malala who great admired Benazir wore one for her speech.  She  also was awarded the Nobel Peace Prize.  She took this honors as tools to help spread her campaign for girls education.  She has been to meet Syrian refugees in Jordan, to Kenya and many other global locations.  She is now studying at Oxford University.