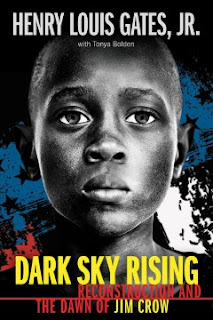 Henry Louis Gates, Jr. is someone I know from television where he has always seemed a calm and intelligent man.  After I reserved this book, I learned that it was aimed at young readers and debated whether to actually read it.  First of all my knowledge of the reconstruction era is very scanty.  Second Henry is very erudite.  Maybe third it would be a quick read which turned out to be true.

A bit about the author.  Henry Louis Gates has had a long academic career involving Cornell, Yale and Harvard.   He has become well known on tv for major productions on African American history and lately for "Finding Your Roots."  In 2010 he was the first African American to have his genome fully sequenced.  A year before that he made national news after returning from trip to China he found his door jammed and his efforts to get in resulted in police being notified and he being charged with disorderly conduct which was dropped.  The incident drew attention when President Obama said that the Cambridge police had "acted stupidly."  A beer summit was called and it blew over.

We all know that the Klu Klux Klan did terrible things after the American Civil War, but what happened afterwards is critical to understand today's racial tensions.

The Civil War itself provided an opportunity for blacks to demonstrate their value   Frederick Douglas campaigned for blacks to be accepted in the U.S. army and became a recruiter.  180,000 served in the army and another 19,000 in the navy.  Many blacks were able to provide useful intelligence for the Union cause.  Close to 40,000 died in their effort with 3/4 resulting from disease

In 1863 Lincoln proposed "Proclamation of Amnesty and Reconstruction" offering property to be returned to Southerners, except for slaves.  Also excepted were Senators, high ranking Confederate officials and Confederate soldiers who had abused black soldiers and their white officers.  Further if 10% the white male voters of a state accepted the terms (including a pledge of allegiance), a new state could be formed and rejoin the Union.  Radical Republicans felt it was too lenient and there were arguments after Lincoln was assassinated.  Lincoln made a pocket veto over a stronger piece of legislation.

The Freedmen's Bureau created in March of 1865 to help former slaves to adjust to their new freedom.

There was a lot of resentment of being asked to accept former slaves as equals.  In 1866 in Memphis, Tennessee there was an conflagration resulting in the deaths of 2 whites and 46 blacks as well as 70 wounded.  Over a hundred black homes and 12 black schools were burned.

It seems there were two main philosophical forces after the Civil War.  One was for leniency to encourage the defector states to rejoin meaning they were not expected to humiliate themselves by conceding any more rights to former slaves than necessary.  This gave some the freedom to abuse blacks and restrict their rights.  The other force was to be tough on the defeated states, a stance taken by most of the abolitionists and this of course caused resentment.

After Andrew Johnson was declared president he was  anxious for the Confederate states to rejoin, but seemed unconcerned about black rights that were being attacked and this offended Republicans.  He vetoed a Civil Rights Act  in 1866, but it was over-rode.

The First Reconstruction Act in 1867 required an acceptance of the 14th Amendment and until then were to be governed by a Military governor.

Many blacks were elected to various state legislatures, but the southern whites found ways over time to eliminate most of them.  Mississippi in their 1890 constitution imposed a $2 poll tax and literacy tests.  Military Governments were sometimes re-imposed as it was found that when the rules were loosened abuses returned.

A black code developed in the southern states that made work contracts one sided against the former slaves, restricted use of guns and absolutely no inter racial marriages.  The Klu Klux Klan intimidated blacks including burning houses and lynchings.  The federal government at one time convicted 600 of their members and imprisoned  ring leaders.

The 1876 presidential election proved to be a turning point.  It was close and confusing and the results were taken up by the Electoral College.  Armed troops were still in Louisiana and South Carolina and by promising to remove them Rutherford B Hayes was declared president.

By 1878 blacks began migrating both north and west.  Sharecroppers were caught in a trap that required them to make a profit while paying exorbitant prices for tools.  Blacks were convicted and sent to prison unfairly where they were leased out to companies at bargain pricing.

In 1883 the United States Supreme Court struck down the Civil Rights Act of 1875 with a 8 to 1 decision.  In 1890 Louisiana passed a Separate Car act that enforced segregation of railway cars and although contested it survived the Supreme Court of Louisiana and the U.S. Supreme Court.  This set many more segregation laws in the southern states.

The term Jim Crow came from a stage performance mocking blacks.  The underlying claim was the segregation was based on "separate but equal."  That was a farce as blacks were given a badge of inferiority that ensured much less money devoted to them.

The blacks in South Carolina proved they could govern with progressive legislations for both blacks and whites including free schooling.  An earlier blog,  "We Were Eight Years in Power"  recounts some of the Reconstruction events in South Carolina linking them to Obama's 8 years in power.  http://www.therealjohndavidson.com/2017/12/we-were-eight-years-in-power.html  The idea of Reparations is brought up in this book.

Blacks of course made some progress forming their own associations including the NAACP.   Even some of the poor whites were progressive, but overwhelmingly the culture was oppressive towards blacks for more than a century.

If this book takes too long for you to read consider the link below that is an hour Youtube video, covering much of the same material with the author being interviewed for his tv production based on the Reconstruction tying it effectively to recent events.  https://www.youtube.com/watch?v=g5svdBw7J3o
Posted by John F Davidson at 10:11 AM