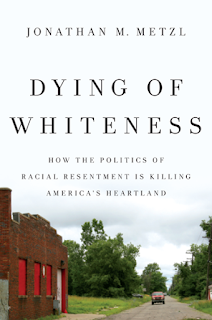 One predominant reason might be racism and Dr Metzl thought that would be worth exploring.  His strategy to understand better was to concentrate on the states of Missouri, Tennessee and Kansas focusing on gun control, health care and education.

Missouri had relatively restricted gun rules, but since the 1990's the rules had been loosened and by 2014 there were state constitutional amendments to further entrenched rights.  By 2016 Missouri eliminated requirements for training, education, background checks needed to carry concealed  weapons.  By 2014 gun homicides exceeded motor vehicle deaths.

There are federal laws to  limit research on gun use, but using available resources he discovered he could learn useful stats with guns used for suicide.   One of my proudest achievements in university was an essay on suicide commemorating the origins of sociology by Emile Durkheim.  Dr Metzl also uses suicide statistics to analyze.

Dr Metzl took part in some suicide grief support groups while in Missouri.  None of the mostly white people felt guns were the problem even though they were the most common method to kill oneself.  Mental illness was the likely culprit in their opinion and the rest of us needed to watch for indications of depression.  Harvard Public Health research suggested that gun suicide represents "an irreversible solution to what is often a passing crisis."  From 2009 to 2015, non Hispanic white men accounted for nearly 80% of all gun suicides in the United States despite representing less than 35% of the population.

Guns are associated with (white) privilege.  After the Civil War the Ku Klux Klan  took firearms from blacks.  Before 2000 most guns were cited for hunting, but by 2017 67% claimed the motivation for ownership was for protection.  The NRA has long been campaigning guns are needed for protection.  The irony is lost on many gun advocates that guns result in increased accidental and suicidal deaths.  Further protection is a bit illusionary.

For awhile the nation focused on the police shooting an unarmed black man in Ferguson, Missouri.  As background to that tragedy it was learned that budget cuts for Ferguson necessitated that the police force play a role in revenue generation.  This resulted in less concern for protection while increasing hostility.

Dr Metzl took his studies of the effects of the Affordable Care Act to Tennessee where he now lives and works.   African Americans generally support the ACA as they recognize it would be helpful for everyone.  Dr Metzl learned that some whites opposed the ACA (more popularity known as Obamacare) even if it would boost their own health as it would also help minorities or immigrants.  They were willing to jeopardize their own health.  Some resented the fiscal costs while neglecting the cost to their own health.

Others resented the mandate requiring those not buying insurance to pay a tax penalty.  The author points out that this provided herd protection in that the more people participating the less chance for many diseases to spread.

Southern states resisted hospital integration and resented the government forcing them to mix with blacks.  Statistics showed that Obamacare was less liked that the Affordable Care Act.  Many people felt that they should be responsible for their own health care and that those who couldn't, shouldn't be able to abuse a socialized system.  The unfairness of disease and accidents didn't strike many that they could also suffer.  Quoting the author,  "Costs... functioned as a metaphor for concerns about a system that gravely threatened the sense of individualism underpinning particular white notion of health."  As it is, much of the medical expenses of Southerners would be covered by taxes of Northerners.

Dr Metzl moved his research over to Kansas to study how an extreme conservative government effected education.  Kansas at one time had an envied education reputation, but under Sam Brownback taxes were cut under the assumption that business would be attracted and make up the difference in revenue.   Over 200,000 had their income tax eliminated (allowing many to lower their taxes by claiming a business).  Individual had taxes reduced from 6.4% to 3.9%.  Businesses didn't start up or expand enough, so that budgets were cut.  In 2015 regressive cigarette taxes were increased and some deductions used by the poor were cut.

Budgets were cut including education.  Larger class sizes and at one point instruction days reduced.  Early childhood education was cut.  Sex education was another victim of budget cuts as well as for ideological factors.   These moves hurt everyone.  Booker T. Washington is quoted, "You can't hold a man down without staying down with him."  Drop out rates increased and graduation rates declined for all groups except for black females that stayed the same.

Kris Korbach, the Kansas secretary of state was anti-Muslim and practiced voter suppression.  He went onto to help the Trump administration for a brief while.

Malcom X is quoted, "Education is our passport to the future for tomorrow belongs only to those who prepare for it today."

There are many factors that influence legislation.  The wealthy have always had more access to power, but realize in a democracy it is critical to appeal to the masses.  A key way of doing that has been through prejudice.  One theme is that blacks are the ones that whites need protection from.  From an earlier blog here is Lyndon Johnson, "If you can convince the lowest of white men he's better than the best colored man, he won't notice you're picking his pocket."

What to do about racism?  Contact seems essential, but is it enough?  Whites, no matter rich or poor  have cultivated a feeling of superiority towards blacks  It is also true that human interests overlap and hence we are always (at least most of us) are open to borrowing what we like when we can.  Some examples include jazz, Mexican food, Arabic numbers,

That some Europeans came to love jazz (and later rock n roll) didn't instantly make blacks more acceptable, but it did put the toe in the door.  When Jackie Robinson broke a barrier in major league baseball he eventually opened up the door for others to follow as whites wanted to win.  It is true that jazz musicians and baseball players were considered exceptions, but gradually other blacks are respected for more that just their skills.

Anti discrimination laws and racial quotas can help, but they also risk resentment.   In addition to using "sticks" we need to find more ways to use "carrots" perhaps as awarding desirable behavior
and offering incentives for integration efforts.  A key platform is education, both to encourage more contact, but also in curriculum.  Too many of us are ignorant about the "other." even though we are all connected.

It is easy to be self righteous but in fact we are all guilty:  http://www.therealjohndavidson.com/2019/07/racism-we-are-all-guilty.html

I highly recommend this book as this puny blog post only attempted to hi-lite a few points.  It helps explain why some people vote against their own economic and health interests and has his own set os suggestions.  You can also check out Dr Metzl's website for more insights, https://www.jonathanmetzl.com