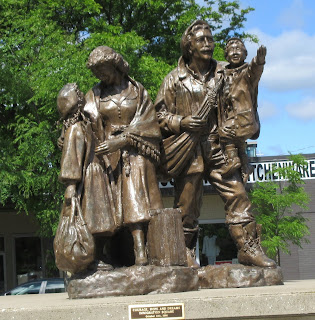 Prejudice simply means pre-judging.  We all note differences including non visible differences.  It is in our genes to make a quick assessment, otherwise we might be killed or raped or possibly helped.  We fear what we don't understand as the world is a dangerous place.  We feel safest and most comfortable among people most like ourselves.

In another blog I learned that the wisest people withhold judgment until they get more facts.    http://www.therealjohndavidson.com/2016/10/the-wisest-one-in-room.html

But in order to survive a quick, even instantaneous decision is often required.  If we are wrong we could be dead.  However better decisions are more likely when one has more time.  It is normal for first impressions to stick until counter evidence is over whelming.   Abraham Lincoln is quoted as saying, "I don't like that man, I must get to know him better."  The first question after encountering something new should be "Why might my initial impression be wrong?"

We are each unique and capable of contributing to our society given a chance.  Society benefits when everyone is given that chance.  A chance actually starts before birth.  Are our parents treated fairly?  Stress and nutrition are factors while we are still in the womb.  After birth are we given an equal opportunity to learn including avoidance of unhealthy distractions?  Are decisions concerning our future made based on merit?  We likely will never achieve perfection, but should always push towards the goal.

Of course some of us are quicker to recognize opportunity and some realize preparation is critical.  As a collective we do not always realize we all benefit when choices are based on reason and not prejudice (or bias).  We need to respect and encourage individuals who can lead us to a better world but that includes everyone.

Politicians gain power by appealing to emotions.  They use that power to stay in power and expand conntrol.  Republicans have long known that the average American would not support their economic agenda and the only way to achieve power is to appeal to emotions by tying a social agenda. Donald Trump did a masterful job of projecting fear and assigning blame.  His simple solutions hurt many people and are counter productive but appeal to enough people to allow him to indulge in his own personal agenda (which nobody really understands).  Racism has proved to be very effective.

Lyndon Johnson once said, "If you can convince the lowest of white men he's better than the best colored man, he won't notice you're picking his pocket."  It is so frustrating for those who understand the economic agenda of the Republicans to see those who are getting hurt the most base their vote on social issues and non policy factors.

When there are problems people look for simple solutions.  We live in a complicated world.  Automation is diminishing the need for manual labour and increasingly so for brain work.  The world is so connected that powerful people can more easily find the weak spots to exploit. We are reaching the limits of what the planet can provide.  Powerful people are in conflict.  There are no simple solutions to most of the serious problems and we need to resist those who offer them.

Ignorance is inescapable.  Education means learning and scraping away a portion of ignorance.  Intelligent people realize they can never know everything.  Education is not just an economic opportunity to be exploited, but critical tools we all need for a fulfilling life.

Homo Sapiens originated in Africa.  Skin was black to protect against the sun--when men moved to cooler climates with less sunlight they needed less melanin and gained advantages of Vitamin D.  In due time  there were many superficial changes in humans while the core remained the same.

What do "others" offer us?  A different perspective.  Uniqueness.  Potential.  Why do we close doors?  Familiarity fosters understanding, but true equality will go forward in uneven steps.  Education is only part of the solution, but a necessary part with many possible approaches.  Racism is an obstacle we all need to overcome if we are to solve the most critical of problems.

An earlier blog with another angle on another side of the refugee crisis with racial implications:   http://www.therealjohndavidson.com/2018/01/the-brain-drain-fromshithole-countries.html

A recent blog that discusses how racism actually costs lives:  http://www.therealjohndavidson.com/2019/06/dying-of-whiteness.html
Posted by John F Davidson at 6:03 AM