THE MUELLER REPORT AND THE AMERICAN VOTER 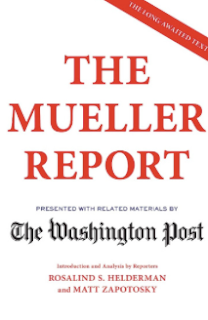 The American voter is making me feel naive.  It is hard to understand how they could support a man who lies, who brags, who displays ignorance, who denigrates in every direction and in my opinion has policies that hurt almost everyone.  The best explanation seems to be that the Republicans and Mr Trump have consolidated a lot of one issue voters who do not analyze much beyond that one issue.

The 1% and those aspiring to it are focused on economic issues such as lower tax rates and de-regulation.  Both of these issues if they had their way are very likely to hurt everyone else.  They understand this as well as anyone.  To maintain their status they have to offer something in order to gain control.  The spin doctors have developed at least three categories that are reinforced by a few superficial issues.  The main categories are gun rights, bigotry and abortion.  There is a natural overlapping, but for many they are focused on their one issue. The Republicans have added in patriotism reflected in superficial aspects such as respect for the flag and other symbols and more critically military power.

Gun rights are supposedly based on the second amendment, but in truth it can be interpreted quite differently than the NRA has chosen.  Aside from constitutional justification (some might say twisting) they rely on fear.  Fear feeds on bigotry.  The reality is that Americans have put themselves in great danger from accidents, suicides, impulsive responses, abusive power that in fact they have a scary rate of deaths by guns.  Gun rights garner so much emotional support that its advocates are not swayed by policies on other issues.

Bigotry is really just prejudice taken to more extremes.  We all make pre-judgments as part of our heredity.  We do not readily understand the other.  We tend to congregate around those we feel most comfortable with.  Demographic trends  are that the establishment white race is losing power.  Traditionally older straight white males have had the most power and they can see that power is diminishing.  We live in a global society whether we leave our neighborhood or not.  Former colonies are asserting their rights.  Women, homosexuals, ethnic minorities and even youth are much more assertive and disrespectful.  When jobs are hard to come by it is easy to blame the "others."  We are stronger as a group when everyone gets an equal chance to contribute. Bigotry is very often counter-productive--check http://www.therealjohndavidson.com/2019/06/dying-of-whiteness.html

Abortion is very emotional.  Life is sacred and abortion is literally murder.  But we have to acknowledge that when faced with an unwanted pregnancy people (men as well as women) it is seen as a life threatening situation.  If legal abortion is not available many (including conservatives and even Christians) would seek illegal abortions, even crude versions.  Women die, other lives are "ruined."  One study demonstrated that a significant reason for a decline in crime rates was that after abortion was legalized fewer potential criminals were born, i.e. for the most part those born in poverty and dysfunctional parenting.

One obvious solution is sex education coupled with easier access to contraception.   Also make parenting easier with supportive economic policies and more tolerance.  It seems that many of those opposed to abortion are also concerned about promiscuity and thus are also against anything that enables more sex.  Some feel the only justification for sex is procreation.  Many feel promiscuity must be punished (stated by Trump himself) and frown on those who are guilty.  In reality promiscuity is often harmful to both individuals and society, but sex is also perhaps the most effective bonding agent which can lead to strong family relations.

How does all this relate to Mueller's report?  America is polarized.  Outside political realities people are unique, but the political structure Americans live in force most of them into one of two parties.  Sure other parties do receive votes, but if you are really determined to affect the outcome it is logical to choose one or the other party.

What I believe has happened is that government has developed to be very complicated and very distant that few really analyze the choice.  Loyalties among relatives and friends are common and social pressures to stick with the team are underlying.  Big money and ever developing modern technology are used to manipulate us.   Check http://www.therealjohndavidson.com/2016/07/dark-money-by-jane-mayer.html

What that boils down to is most Americans are committed to one of the parties and do not pay much attention to the other party except to find criticism.

I guess the slick lawyers would say the case against Donald Trump is circumstantial at best and likely rigged by the Deep State.  But when circumstances were being attributed to the Democrats facts were twisted and spun and I must admit seemed extremely false.  The Benghazi attack was a very unfortunate occurance, but not particularly unexpected.  A dangerous place in which those directly involved realized was risky.  The Obama administration had its role by opting to get involved in Libyan rebellion, but Republicans were very quick to attack and tenacious when they felt they could spin it into something evil.

What is visible to anyone who read the report or even just followed the news from a reliable source is the evidence casts strong suspicions.  Multiple contacts between Trump's team and the Russians tied to actual policies and public statements.  Trump rejected government intelligence resources in favor of Putin.  Trump made many public obstruction efforts which by themselves would indicate he is hiding something.  He is the first presidential candidate to refuse to reveal his tax returns.  On top of all that the Mueller report is obviously reminding us of the many instances of obstruction and contact that Russians made determined and systematic efforts to turn the election to Trump's favor.  One must wonder why and note that Russia has indeed attained some of its goals.

A good hunk of Trump's supporters are indifferent or even adamant the whole process is rigged against a man who has done commendable things they feel are worth whatever it took.

The commendable things include a very harsh campaign against desperate refugees both from south of their border and from the Mid East.  De-regulating has progressed, but without too close a look in fact are removing financial and environmental protections for everyone.  Budget cuts to education and health care stand to have long term disastrous results.  Withdrawing from the Paris and Iran Nuclear agreements are having potentially catastrophic results.  Bending the Supreme Court and lower courts to conservative (Trumpian) outcomes which will drag on for decades with likely unhealthy consequences.  To top all that off, security measures to protect their election integrity are being sidelined.

To me an underlying problem is inequality.  It has always been that those who have power are able to set the rules and build increasing wealth and power.  The only thing that breaks this trend is a revolution.  Revolutions are stigmatized by those in power and for most of us they are frightening because they upset our comfortable status quo.

The wealthy and powerful are able to draw in enough of the masses to defend the status quo sometimes, as now by diverting attention from the real problems.  In a recent blog about "Amusing ourselves to death" it was assumed we are headed for a dystopia, but that there are two contrasting versions of the vehicle.  "1984" represents a harsh path with censorship, a police state, etc.  "Brave New World" by contrast suggests the path may involve pleasurable things (diversions) like drugs and sex.  One can see both trends. check out http://www.therealjohndavidson.com/2018/05/amusing-ourselves-to-death.html

On one hand we can see censorship and police state trends globally.  On the other hand the world seems relatively sexually liberated and literally millions even perhaps billions are using drugs to deal with life's unfairness.  Entertainment permeates our lives, even to imbibing news.  In education one can see trends towards money making while the arts and philosophy take a back seat.

What can be done?  The Democrats are at present opting for a slow walk feeling they can win big in the next election.  The Republicans are using their resources to stomp down on the truth and divert attention.  The Democrat presidential candidates smelling an opportunity are bringing up policies that appeal to progressives, but scare many moderates.  One can imagine the Republicans will welcome a top heavy progressive Democrat candidate, yet the Democrats seem to want to outdo one another.

The testimony did in fact reinforce a lot of damning evidence that may overcome the Republican attacks and Trump's vociferous claims of vindication.  There are also several ongoing investigations that may prove to be more damaging, but time can also diminish their impact.  The Democrats need to voice the evidence more loudly.  The Republicans were continually rebuffed on their Benghazi attacks, but continued and it probably was a factor in Hilary Clinton's defeat.  We can be certain the Republican spin machine will be loud and over whelming.

Naomi Klein noted that progressives have many separate causes, but they are not united as the Republicans are.  Some deep thinking needs to be done.  For example Naomi points out the alliance between native groups and environmentalists have given each more power towards their goals.  Many groups are devoted to overcoming discrimination against homosexuals, females, the disabled, racial and religious entities.  Climate change has energized many activists.  Others are trying to use gun controls to make a safer country.  Still others are concerned about inequality.  There is a little overlap in these concerns, but if each group realizes they have more power working together great things can be accomplished.  Compromises will need to be made, but respecting the concerns of other people can enable a much better result.  The sooner these compatible causes work together the sooner they can assert themselves.  Check http://www.therealjohndavidson.com/2018/05/naomi-klein-writes-another-insightful.html

As many of you know I am Canadian and we have our share of problems, but we have more than two parties and the "extra" parties do have some power, so we have more choices.  I also believe proportional voting would give even more choices that would give better government.  As Canadians we are small and we know it--what happens in United States has a profound effect on us. What are you going to do about it?
Posted by John F Davidson at 6:23 PM