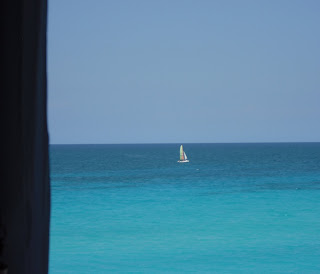 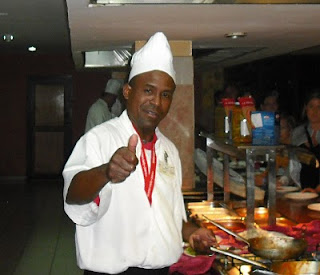 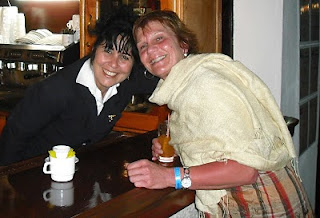 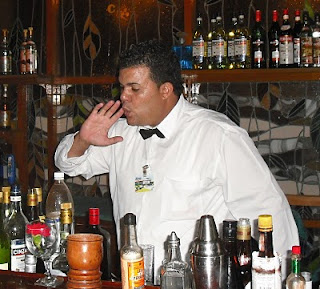 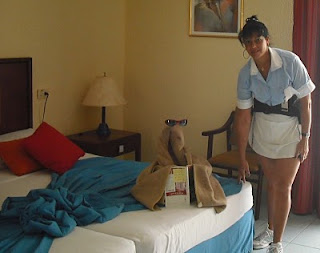 From "The Time Pardox" a gift from my daughter Heather, an important concept was that it is better to focus on good things in your past than just on your future. I interpret that to mean good things not only make you feel good, but can motivate you to want to repeat them in your future. Most recently I visited Cuba for the second time and would like to record the good memories (maybe a few not so good).

I have not really gone on many vacations and this time I chose to visit a place I had been to a year before. Money wise and temperature wise it seemed like good value. Part of me wants to seek out new experiences and part of me wants to be assured I won't be disappointed . Sharon and I both enjoyed the hotel, Arenas Doradas despite negative comments on Trip Advisor.

There were in fact a few minor complaints, but easily resolved. We got into a routine, but wasted no time in figuring out how to reserve beach space before eating.  As usual I took two books to enjoy--one, a Jane Austen novel, Mansfield Park and the other a philosophical book, "The Best Things in Life." We ate most of our meals at the main buffet at nite and for breakfast while using a dining area close to the beach for most lunches. Most evenings we attended some entertainment, some of which were very enjoyable. Several nights we saw a group of dancers that we enjoyed. One night we saw some singers and musicians that were one of the highlights--the singers were two men and one women who all were impressively individually and even more so together. They were backed up by four or five musicians including a trumpet player.--I liked them better than other entertainment, including at the Tropicana, a CD I bought and other live entertainers. I don't even know their names.

Before going any further one feature of this vacation was very important--people. At the airport waiting for our flight we encountered two women who it turned out were going to the same resort. We talked at the airport and later in the bus and the next day when we and others met our travel consultant from WestJet and ended up decided on two excursions. Debbie and Dorothy were two friends from Mississauga who we learned later had a connections through army cadets. I'll write about the two excursions, but as time went on we both developed a stronger relationship. Our first trip we met a lot of enjoyable people, but not formed any friendships. One interesting thing Dorothy did was to approach some of the dancers in the lobby and get them to pose. Debbie and Dorothy both went swimming with the dolphins and convinced us we should have done that (maybe next trip).

At the resort some of the staff really stood out, a few from our earlier trip. I took photos of Irwin, the bartender, Maria, now managing a coffee bar (and one of the best smiles I have ever seen), Raphael, our pasta maker, and our maid, Carmen who made some interesting designs on our bed covers. They all were friendly, and went out of their way to please us. Countless others also helped. They were not just doing their job, they were making our visit more pleasant. 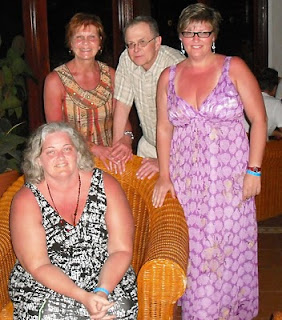 Our first excursion was to the town of Varadero which we neglected on first trip. We visited  a market and  a restaurant (previously owned by Al Capone) with a gangster theme. Our guide Eduardo was very amusing--one theme was that as a student he hated mathematics and took English instead.  He was critical of many things, but recommended some restaurants. He seemed knowledgeable about world events and Cuban involvement. The highlight was a golf course mansion previously owned by one of the Duponts. The view reminded us of a painting in our bedroom of a sea view. One disappointment was that through a misunderstanding we missed a shuttle bus connection for a second visit.

Our second excursion was to a trip to Havana this time including the Tropicana.

A number of thoughts. Our guide was very good pointing out all sorts of things. He was knowledgeable about Cuba's position in the world. It is easy for tourists to dismiss a lot of what the guides say as propaganda not realizing that we too are subject to propaganda. The Americans have a extremely negative view of Cuba. To me it stems from the fact that for a big part of their history Americans exploited Cuba. At the time of the Castro Revolution in 1959 many of the exploiters were defeated and left any way they could. Many of them are the ones with resentment and having developed political power (most in evidence for the 2000 American election that was a travesty). Americans treat China and Vietnam better.  Cubans have suffered from the American embargo, but have done some remarkable things. They have medical service for all and that in fact is one of their most critical exports. They have respect for education. 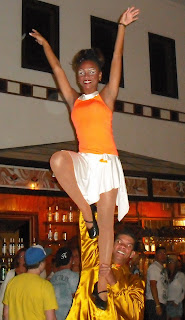 What they also have is a lot of poverty. Tourism is one solution. Downtown Havana amazed me on previous visit with old buildings with the majortiy being rundown and worse. Rebuilding is going on all the time and many buildings are very impressive. Our guide had warned us about people trying to get money out of us. Indeed we were assaulted a lot. Before going we had packed one suitcase at an extra cost of $20 with things to give away including toothbrush (marked with Alexisonfire) and toothpaste, pens and other odds and ends. Pretty soon a crowd would form. At one point it became offensive with young boys demanding more. Another occasion some musicians had approached Debbie and Dorothy with songs and everyone seemed to be having fun. At one point I was asked for a tip, but I only had a very small amount left and the guy said it wasn't enough. Aggressive begging is a very big turnoff. We have decided if we go back to Cuba we probably will not visit Havana.

We did enjoy many aspects. Our tour guide suggested a place he called the Dark Camera--it turned out to be Camera Obscura. They had a unique camera that showed us directly what was all around us in great detail--very impressive and only 2 pesos. We enjoyed another restaurant. Saw lots of interesting things walking around--a peacock, musical groups, souvenir shops. One interesting thing was that I had decided I wanted a T shirt for Jose Marti instead of Che Guevara, however no such thing as a Jose Marti T Shirt.  I had taken a photo of a statute and on the way out saw a book on Jose Marti I would have bought if I had had more cash.

The group was taken to a hotel a few hours in advance of the evening entertainment. Only Sharon and I and Debbie and Dorothy were from Arenas Doradas and we stuck together. There were other interesting people in our group, however I would only mention two Chinese girls both working in Edmonton. They were interesting in a few ways. One of them was scared of dogs, but made an attempt to pet a dog at one of our stops. One had a mother in China who was texting her regarding a tsunami. They were both charming and likeable.

The show at the Tropicana was very impressive. It was an outdoor facility with many stages. A lot of very capable dancers, singers and musicians kept our attention for a good two hours. A very long day.

Except for these two excursions, most of our holidays were sunning at the beach reading, drinking (lots of rum and some wine and liquers), eating and enjoying our new found friends.

Photos on this entry include dancer in the lobby, the four friends, Carmen our maid, Irwin, the bartender, Maria and Sharon a view from the Dupont mansion and Raphael our pasta maker.