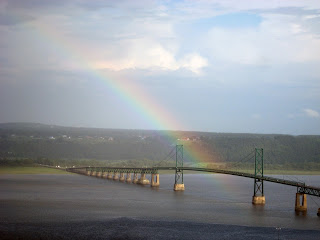 At my father's funeral my sister described one attribute of my father that really hit me. I am like that too. My father was a truck driver and car rally driver who liked to take different routes. He also used to drag his kids on truck trips which at the time I didn't really appreciate.

Nonetheless I have chosen jobs that allowed me to move around and not be stuck at a desk all day. I probably lost something with those decisions, but I did like seeing different places.  As a social worker I discovered two places I later dragged my wife and kids to--one was a small lake inside Midland and the other was Wasaga Beach. As a salesman I found excuses to travel a little more, but a big breakthrough was when Heather decided to go to King's College in Halifax.

I grew up in Oshawa where my travel was not much more than a day away from home and I thought of it as the centre of the world. Sharon was upset about her daughter going so far away, but I thought it would be good for her to see more of the world than Hamilton. It turned out to be a real door opener for me as well.  I managed to open my sales territory to the Maritimes, at first very tentatively, but over the years I still have a sales connection to the Maritimes. I drove all around Quebec, Nova Scotia, New Brunswick and one trip to Prince Edward Island.

Another big deal was getting to see my sister Rebecca. When she got married and moved to Montreal on her own (Ali was tied up in Morocco, but had decided he was willing to live in Montreal) I didn't visit, even though my father and most of my sisters had visited her. I realize she was on her own under tough circumstances. She had gotten a job playing piano at dancing classes and gradually picked up the French language and some friends. Ali moved in and they had two daughters, both of whom I had met, but in Ontario. I used Rebecca's home as a sort of a launching pad to drop off stuff and visit Heather in Halifax. I made sales calls on the way either near the 401 or in Ottawa. But I got up very early (3 am or so--and Rebecca always got up with me to help out) so I could drive to Fredericton where I could make a sales call in English. After doing this for a few times Ali pointed out that I could probably makes sales call in Quebec which I had avoided for the language problem. I got some help from Jacques Major at work who gave me a basic sales line that worked pretty good. I then made one or two sales calls on my way back--one of which despite a real language barrier actually yielded some results.

I then became quite keen on selling the Quebec market. I had opened up a wholesaler in Quebec that also covered the Maritimes, but had never really worked it in Quebec. I have covered just about every part of Quebec from Noranda to Rimouski to Lac St Jean. A couple of things came from this. I got to spend more time with my sister (as I used her house as a base for a lot of the Quebec calls--I not only enjoyed my sister who introduced me to lots of things in Montreal, but also Ali and their two daughters Leila and Samia. On one of my trips I decided to tackle Quebec City and was aware of two tourist attractions, but felt I didn't have time to see either. I saw both--I felt traffic forced me into old Quebec and I missed a turn and saw Montmorency Falls. In that area I first noticed Ile D'orleans. All I saw was a lot of trees and cars going the bridge. Later I read something interesting in the local paper.

A few years later on my 60th birthday I was asked if there was anything special I wanted and I said I wanted to visit my sister Rebecca. At this time my traveling to the Maritimes and Quebec had ended (Heather back home and my job situation changed), but I missed my time with Rebecca's family. To make it a bigger trip for Sharon I decided to include Quebec City and dragged her to Ile D'Orleans which at first was a big disappointment for me and I was ready to give up, but Sharon thought once we are here let's at least follow the road around. From that time things turned much more pleasant for both of us. We liked Quebec City as well and on a subsequent trip spent almost a week at a bed and breakfast in Ile D'Orleans.

I should add in trips to visit my two children. Neither Sharon nor I had ever been to the Maritimes, but we were quite taken by Halifax. I dragged Sharon around to some places I had enjoyed on my sales trip--Oak Island, Yarmouth and my favorite Cape Breton. My brother Marshall and his wife Jean had enjoyed whale watching at Briar Island which we also enjoyed. We had both gone to Victoria before having children and had enjoyed it, but from walking and bus only When Michael decided to go there we visited and rented a car and enjoyed what Michael knew of Victoria and what we picked up from reading. Discovered a favorite restaurant--Il Paggliacci. On one trip we went to Tofino taking along my oldest friend, Bob Stone. On my first trip to Victoria it had been as an offshoot for visiting Bob and Adrienne who lived in north Vancouver. It really opened my eyes to advantages of travel. I had never understood ferry boats and didn't have a clear picture. I didn't realize how far apart Vancouver and Victoria were from one another. Since then I have been on a number of ferries, always with my car and recognize them as a major consideration.

Quebec opened my eyes--in Ontario I visualized Quebec as being Montreal and maybe Quebec city. Actually being there made me realize it is very much like Ontario with a variety of towns, villages. Montreal and Quebec City have cultures that are wonderful. Outside Quebe many people seem to think Quebeckers could all speak English if they chose to, but in fact why should they--French is their natural language., their way of expressing themselves. This is really sketchy, but I hope indicates a love of travel.
Posted by John F Davidson at 11:10 AM