Willpower and two of my all time favorite quotes 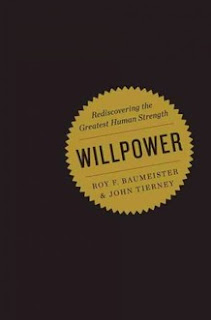 Science moves forward in strange ways. A lot of things are discovered after the original expectations fail. I am reminded of one of my favorite quotes by John Lawrence Reynolds, a writer from Burlington--"Experience is what you get when you were expecting something else." "Willpower" is no exception as the path to their conclusions is laden with failed expectations of many different experiments. When things don't work out according to plan a credible scientist will consider alternatives. Eventually they eliminate possibilities and declare a new conclusion.

What is willpower? Most would agree that it is that inner force  that allows you to do something or not to do something. Humans do a lot of things without thinking, but to do or not to do important life changing things requires some self-control not to give in to distractions and not to give up. Most of us would agree that self-control and willpower are essential for success.

Near the beginning of the book the authors Roy F Baumeister and John Tierney reach what for me is a new but logical conclusion. Making decisions and sticking to them takes energy. Each decision contributes to "ego depletion." Where do humans get energy? From what we eat. They narrow it down to glucose. They are quick to point out that although sugary foods can produce a "high" they also lead to a "crash" so it is better to eat something that is slow burning, specifically low glycemic foods. A few suggestions are made to improve this aspect of will power or self-control.

Examples are given. The one that stands out for me is a list of four potential parolees in the Israeli justice system. They are a mix of Jewish and Arab, some with a violent history with the others more non violent. They pointed out the actual parole decisions could not have been predicted based on ethnicity or tendency to violence. It turns out the critical factor was when the judges ate their lunch. After eating lunch they were more lenient than when they hadn't eaten for awhile.

The authors do not rely on glucose to totally explain willpower. You can consciously re-arrange aspects of your life to develop more willpower. They claim short-changing on sleep lessens self control. They refer to David Allen, a time management expert to make a lot of points. Slow and steady work is better than bursts of energy.  Monitoring your plans by yourself or better by others keeps you on a steady path. Setting goals is helpful. Developing good habits makes self-control easier.  Read more on David Alllen:  http://www.therealjohndavidson.com/2013/01/making-it-all-work-by-david-allen.html

The more you can delay giving into a temptation, the more often you will actually avoid it. Some temptations can be used as a reward for more productive behavior.

Self-esteem was in style a generation ago, but the authors claim too much is counter-productive. They recount studies with children raised by single parents under different circumstances..

Another favorite quote from Bobby Knight, Indiana basketball coach, "The will to win is not nearly as important as the will to prepare to win." So many of us think that if we just find the willpower at the critical moment we will be successful. The truth is that if we make the effort over a period of time we will be more likely to be ready for that critical moment. The authors find from their research that procrastination is founded on faulty assumptions.

The two quotes are alternated on my office wall and I was struck how each was appropriate for my take on "Willpower." Worth reading.
Posted by John F Davidson at 5:24 PM