MAKING IT ALL WORK by David Allen 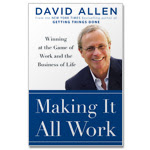 Humans are naturally lazy, but we live in a world which for virtually all of us requires effort.  We praise hard work, but we really admire the result of smart work.  A lot of it boils down to organization.  If you can find a more effective way of doing what is most important you will get more out of life.  David Allen will admit that a lot of what he suggests is common sense, but that most people fail to do them anyway.

David Allen, wrote an earlier book, called "Getting Things Done" in which he detailed a system for getting things done.  I missed that one, but when researching him I realized he had subsequently wrote "Making it All Work" which from what I can gather offers a more refined idea of the original book.  If so, I am getting at the kernel of his thinking with less effort.

No system is effortless and David's requires a lot of thinking and effort, especially getting started. One of his basic thoughts is that if you don't capture all of your concerns in an easily retrievable manner you will be distracted and forgetful which of course is not efficient.  Focusing is the key, but to do so you need to filter out lesser priorities which is easier when you feel confident that nothing is forgotten.  Although others focus on prioritizing, David recognizes you have strong concerns that will not be ignored.

A lot of organization systems start with the end, as in the purpose for doing any and every thing. David suggests you begin with those things that already have your attention.  You should capture them on paper and don't leave out anything that is on your attention radar.  A lot of concerns will be trivial, but part of the problem is that they keep butting in and distracting you.  You fear forgetting details.

There are a lot of factors to be evaluated in controlling your concerns and gaining a perspective that are inter-related.  As you understand the different factors you use them to prioritize and organize activities to deal with what has your attention.  Thinking deeply on your choices is worthwhile, but only if it leads to action.

You need to review on a regular basis, but not everything in the same way.  Planning actions as in what is the next action is the most key effort as that is how you actually move forward.

One last quote from the book gives focus to the point of it all.  "Those who face what is actually before them, unburdened by the past, undistracted by the future, these are they who live, who make the best use of their lives; these are those who have found the secret of contentment."  Alban Goodier.

To keep up to date with David's latest thinking go to his blog at http://www.gtdtimes.com/  It is current.
Posted by John F Davidson at 4:10 PM