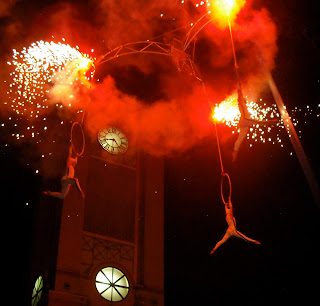 I already published my resolutions for the future, but perhaps it would have been wiser to reflect on what happened in the past year beforehand.   A Filly's Best Friend has inspired me to take a look.  If you are involved with horses you will enjoy her blog. http://fillysbestfriend.blogspot.ca

2012 was not all good for sure.  I lost sales opportunities and do recognize if I had somehow been smarter or harder working it might not have been as severe.  As I often used to say when going on a sales call if I didn't actually get a sale I did get an education.  Lots of education was gained and some of it will be put to better use in 2013.

One of the projects I worked on for over ten years ran into some problems.  The Burlington Eagles have been putting out an annual magazine for 11 years with me as the main sales rep all that time.  Part of their problem is that it is run by volunteers and this year they ran into all sorts of difficulties and the magazine kept getting postponed.

Great Saves was truly a great idea offered to me, but required greater team effort to get over the hump.  It was a new way of fund raising for minor sports clubs where anyone could buy bargains with part of the proceeds going to the clubs.  Trying to line up clubs, buyers and sellers, a true chicken and egg dilemma proved to be too difficult.

My Uncle Cameron Stewart died in November.  Funerals bring out mixed emotions.  It is sad that someone has died, but it reminds us of pleasant memories and brings relatives closer together.  It can also help you appreciate life a little more.  You can read some of my memories at http://www.therealjohndavidson.com/2012/11/my-uncle-cam.html

A lot of famous people died including Stephen R Covey, a man I admire.  My memories of him are here  http://www.therealjohndavidson.com/2012/07/stephen-r-covey-pointed-way.html

Looking ahead it is a good idea to remember the many good things that also happened in the past year.

The Rider, http://www.therider.com  improved its share of a market made difficult by the economy.  Barry Finn, the owner made some serious steps into online publication by buying two websites, Equine Niagara News, http://www.equineniagaranews.com/ and Barnmice,  www.barnmice.com/ as well as getting more involved with social media.  The Rider's involvement has been one of the driving forces behind my own increased activities with Facebook, Twitter, a newsletter and blogging.  Most of my efforts will still be concentrated on the newspaper, but not only will it have greater awareness, I also will get the odd chance to sell online.  Although I really have no horse background I really appreciate the perks.  Number one perk is watching horses which I get to do at various horse shows.  Perhaps the biggest perk was going with my wife to see Cavalia Odysseo--my most popular blog post  http://www.therealjohndavidson.com/2012/05/cavalia-odysseo.html

The Eagles started a new website and I have a chance to sell ads on line.  With a more exciting layout it should be increasing traffic.  The Eagles also had another record breaking food drive by pooling their resources with some other groups they brought in a little over 114,000 pounds of food (that is not a misprint).  Proud to have played a very small role in that effort.  http://www.burlingtoneagles.com

Another good year of reading good books which I summarized at http://www.therealjohndavidson.com/2012/12/books-i-enjoyed-in-2012.html

Getting more and more into movies and for 2012 here is what I remember http://www.therealjohndavidson.com/2012/12/favorite-movies-of-2012.html

For the first time Sharon and I attended the Art Gallery of Hamilton film festival.  Really only took in the trailers preview and one of my favorites of the year "The Intouchables".  Looking forward to getting more involved this year.  Sharon kept up a tradition of going to a TIFF presentation with some of her girl friends.

I made it to most of the Art Crawls on nearby James St north in Hamilton.  Near mid year I wrote a blog post about the evolving art crawl which you can read at http://www.therealjohndavidson.com/2012/05/hamiltons-art-crawl-evolving.html The Supercrawl was better than ever with lots of art and musical entertainment.  I included lots of photos in my newsletters.

Attended two book readings.  Robert J Sawyer spoke at the Hamilton Library with some more details at http://www.therealjohndavidson.com/2012/04/memories-of-robert-j-sawyer.htmlwhere the title plays on his theme.  John Lawrence Reynolds who I met through work spoke during an Art Crawl event and I bought his book (which is mentioned in book blog).

Another of the pleasurable arts I enjoy is eating at restaurants and I was fortunate not only on my trips, but locally and would like to mention a few.  Rayhoon Persian Eatery, Nonna's Ristorante and Thai Avenue in Burlington were enjoyable. Acclamation, Mex I Can, Wild Orchid, Earth to Table, Spice Avenue and Sarcoa in Hamilton.  I had one experience that I won't mention, but pretty good odds.  I also have to add I am very lucky as my wife is well recognized as a great cook (and baker).

Combining two pleasures I selected the Burlington Library choice for Burlington Reads, "The Beauty of Humanity Movement" and it inspired me to visit a nearby restaurant, Thai Avenue.  You can read about it here at my second most popular blog post.  http://www.therealjohndavidson.com/2012/07/beauty-of-humanity-movement-book-review.html 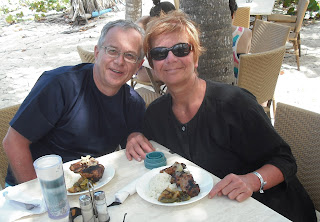 Unlike my world traveling son, I don't really get around much.  Past vacations have been built around my kids choice of schools (Halifax and Victoria for a bi coastal experience) or my travels selling through Ontario, Quebec and the Maritimes.  Sharon and I have discovered Cuba and find it a great value.  We have had such good experiences at Arenas Dorado in Veradero that this past year was our third visit.   One of the unexpected highlights was a wedding on the beach and although we didn't know the bride and groom (or even speak their language)  it was enjoyable. More details at http://www.therealjohndavidson.com/2012/03/cuban-memories-2012.htmlOur fourth visit later this year may be the last as we are looking further afield.

I am lucky where I work, OKD Marketing as the owners treat their employees as people to nurture and reward.  The staff was taken on a 3 day trip to New York.  In many ways New York is like the capital of the world, but I only knew about it through the media.  Some highlights included Central Park, Times Square, Macy's Brazilian display, the Top of the Rock, Ellis Island and restaurants.  It is great to socialize with those you work with. You can read my take on it and see some photos at  http://www.therealjohndavidson.com/2012/04/short-trip-to-new-york.html 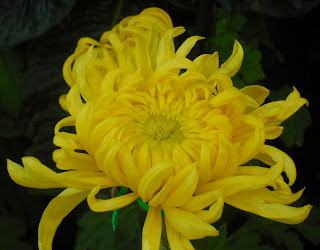 In the fall it has become a ritual to visit the Hamilton Mum show and this year had a very colourful show.  Also in the fall I take part in the Superwalk to support the Parkinson's Society.  Wish I could say I raised a lot of money, but I do keep at it.

Michael, my son was not able to overcome immigration restrictions in England and ended up trying his luck in New Zealand.  He had no job, just a friend of a friend, some research and a lot of confidence.  By making calls on various schools he fairly quickly got a temporary teaching job.  It worked out so well that he will start the new year (and January is a new school year in New Zealand) with a more permanent job.  As I write this he is actually visiting in Taiwan adding to his global awareness.

Heather, my daughter endured a few changes during the year with her main job location changing, but at the end she got a boost getting a part time job that fits in with her existing job situation.  As some of you may know Heather is the heart of #TeamHamOnt on twitter.  Through that she has been a strong booster of Hamilton. Just before the holidays she organized a fund raiser involving food trucks and #TeamHamOnt.

I was pleased that Obama won the American election, but I have become more disillusioned with politics.  Big money, special interests and fanatics have disproportionate power over everyone else including Obama.

102 blogs helped keep me out of some mischief.  I dug up a lot of good memories and gave myself the opportunity to spout off a bit.  Books, travel, movies, horses, events, selling, family tree research, politics and other interesting things.  Look forward to doing better this year.

I try to learn something new each day.  One of my focal points is organization.  From the CBC Fresh Air website I picked up a video that instructs a better way to fold socks.  Of course there is work involved, but it makes it easier to fill your drawer and as the work is front loaded, when you are in a hurry you will can take off much faster.  You can learn too,  How to Fold Socks - YouTube


Weddings are one of my favorite forms of entertainment and this year our good friends Mike and Karen Bromilow's daughter Leanna got married to John.  It was a very well catered affair, with a touching ceremony, a lovely bride (with matching groom), a few laughs, good talks with friends, lots of dancing--what else could you want?  Looking forward to David and Krista's wedding on June 1st. 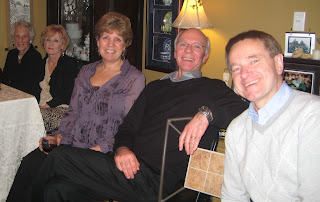 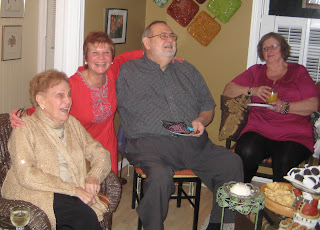 We had an unusual New Years Eve this year.  Usually there are about 6-8 of us regulars, eating, drinking and talking.  This year we hosted 16 people.  One, Josie came up from South Carolina to see her mother and joined us.  The more the merrier.  I am still eating the leftovers, but they are excellent.

Looking back on my resolutions last year I had a few successes, but not across the board.  I think I can honestly say I made progress and have decided to move forward.  Resolutions should help you improve a challenge and build on your strengths.

PHOTOS:  Top one is from the Supercrawl and I felt very lucky to get such a spectacular shot that I  hoped would get your attention.
Next down, the happy couple on Veradero Beach is Sharon and myself.
One of the flowers at the Mum show.
Peggy, Roberta, Susan, Rob and Rob at New Years' Eve party.
Florence, Sharon, Hank and Debbie.
Josie with her sister Barb and friend Debbie.
Posted by John F Davidson at 3:44 PM