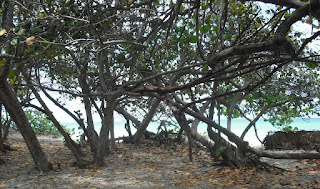 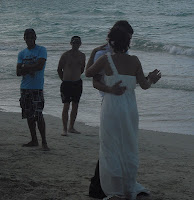 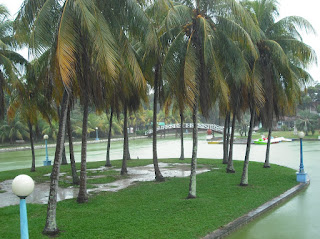 From a book my daughter Heather gave me I appreciate that to enjoy life and motivate yourself it is best to remember pleasant experiences. Vacations are usually pleasant and we owe it to ourselves to remember them. You may not pardon me, but I will be remembering lots of details that might bore you. I'll do my best to make it an enjoyable read.

Sharon, my wife and I have gone to the same resort in Cuba for three years in a row, despite a few negative criticisms. We like the place, and more importantly we like the people. I do pride myself on seeking new experiences to learn and to enjoy, so I do try to expand a little each time. 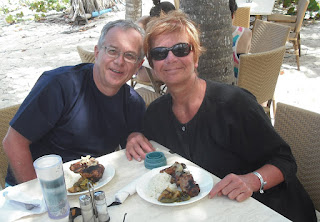 This time we stuck to Arenas Doradas our resort on the Varadero beach, but I did travel to the town and spent some time there to get a better feel for the local atmosphere.

On our way in from the airport our guide commented that they anticipated a heavy hurricane season. They are conscious of climate change. I have to say that the weather was a big reason we came and it didn't disappoint.

Vacation time is a good time to meet new people. Early in our stay we met a couple, Gilles and Nadia from Laval, Quebec. Found a lot of things to talk about--he was interested in folk dancing, languages (he had taken a short course in Spanish before this visit) and triathlon. Gilles and Nadia had been doing a morning run and made an accidental discovery of interest. They ran by a large pond beside the road and on impulse Nadia threw in a rock and was surprised to see a dolphin swim towards her. They had stumbled on a compound for performing dolphins, but it was free. We visited the next day and enjoyed the dolphins. Another day we encouraged an older couple to check it out.

In the lobby where people grab drinks there is sooner or later a re arrangement of chairs and tables. We ended up being joined by two younger women who couldn't find anywhere else to sit. They were joined by another woman who had met them through a travel agent. She lived in Flesherton and worked in Markdale, small Ontario communities where I had made sales calls. She knew of some things relevant to my job. She also had stayed in different parts of Cuba and told us her experiences.

On a previous trip Sharon and I had taken an organized bus tour of Varadero and saw a few highlights, but in a fast controlled manner. This time twice I took advantage of the free shuttle service from the hotel. A few things caught my attention. There are a lot of interesting restaurants which I regret I didn't visit. I did buy food from street vendors and was very pleased at the taste and the value (cheap). One unique item I bought after being offered a sample was Cuban fritters. They looked like French fries, but were from plantains. Instead of vinegar and salt mine were garnished with sugar and I could have had honey. Nice and sweet.

In town I visited a park, Jasone Parc that the tour bus had whizzed by. It was much larger than I guessed with lots of tropical trees, and a large pond with an island. Restaurants, snack bar, small boat rentals and birds. They had some historic equipment for making sugar from sugar cane.

Much of my time was spent reading, at the beach or in the lobby. I love reading and finished three books and read quite a bit of three other books. The one that got attention was "Sarah's Key" which my wife finished. On the beach she had one very flamboyant swimmer comment that it had made him cry. When I say flamboyant his thong swim suit drew lots of photographers which he encouraged.

I had been curious if the beach extended in town and was pleased to see that it did. Veradero is really a peninsula with over 20 kilometres of beaches.

Each night Arenas Doradas offered entertainment. Most of it consisted of dancers who I thought were quite good. On our last day there was a wedding on the beach. It was public and generated a large audience. It was very simple, but had some of the traditions associated with weddings, but also taking advantage of the location.

Your vacation is not really over until you go back to work. At the airport there is a wait of a couple of hours. Ended up sitting down by an older woman and made small talk for awhile. I pulled out a book I had started reading 'Sarah's Key" and she commented she had just finished it. Before too long we were talking about books, but soon got into both our favorite topic, politics. I learned she and her husband (who joined in) were from Thunder Bay. They had been alerted to a last minute deal by their daughter in law, re-arranged some meetings scheduled and two days later were on their way to Cuba. Her husband pointed out they had deliberately chosen a downtown Veradero hotel so they could get a better feel for how the locals lived. A big surprise for me was that they were both in their 80's, but were obviously able to enjoy their retirement and live a purposeful life.

Back home and trying to catch up. Would I go back? There are so many places to visit, but I want the feelings I felt during my Cuban travels. People are the most important detail in whether you enjoy your holidays. We liked the staff at Arenas Doradas and were able to meet a number of congenial people.

It is unfortunate the politics that makes Cubans such an isolated country (at least from the big spending Americans). Americans have great relations with many rivals such as China and Russia and even the great killer of Americans, Vietnam. The difference is that when Castro kicked out those who supported or accepted the Mafia and the dictator Batista many of them went to Florida where they were able to make things difficult for Cuba. In critical ways they influenced American politics, often in an unhealthy way. The Cubans I was able to meet were pretty decent and hardworking people.

Photos: The upper left hand corner is overlooking the beach from the town of Veradero. Beside that is a photo of a couple married on the beach at our resort. Second photo down the left hand side is at Josone Parc in Veradero. Beside that is myself and Sharon enjoying (and I do mean enjoying) a meal on the beach. The bottom photo is of one of our dolphin encounters.
Previous trip:  http://www.therealjohndavidson.com/2011/04/cuban-memories.html
Posted by John F Davidson at 12:26 PM