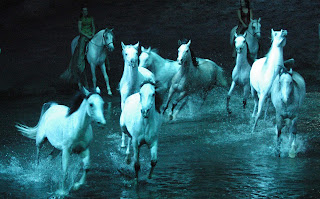 Some people might argue that I don't get out enough (actually the people that know me best), but I had a very wonderful experience, last night at Cavalia's Odysseo.  I am lucky that working for The Rider I get the occasional perk and this was certainly one. 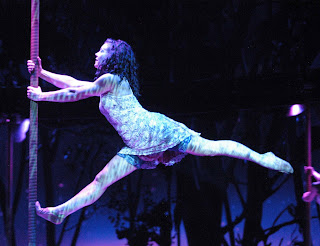 I am not sure of all the connections, but Odysseo is an offshoot of Cirque du Soleil integrating the basic concept of a modern circus.  You will find acrobatics and what I call aerial gymnastics.  You will find horses.  What makes it modern are things like scenery changes made possible by technology, original live music and choreography.

The first thing you are conscious of is the tent, a true Big Top.  It rises 125 feet and contains 120,000 square feet.  More importantly inside there are no obstructions on stage or in the audience.  It was developed with Italian, French and Canadian engineers and designers.

The performances are top notch.   On some of the aerial acts you will not believe what you see.  On several runs of trick riding, the horses are very fast in tight spaces.  A few times we thought there had been a mis-calculation but if so, the rider was able to escape with a smile.  The regular tricks were thrilling enough even if you have seen similar ones before. 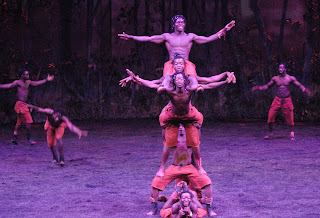 There was not only thrilling action, but lots of beauty.  Drill team precision was normal.  Some elegant dressage highlighted when the stage was flooded.

Stage management was very smooth and an act in itself.  They used what might be called regular curtains, but you would be surprised at what you thought was scenery also was another curtain.  After initially viewing ground level acrobatics and horse maneuver some of the tree scenery was pulled away to reveal a hill and another entrance. Near the end part of the stage was flooded and new routines with horses, riders and acrobats were enacted.  Another element of stage management included lighting which helped create different moods. 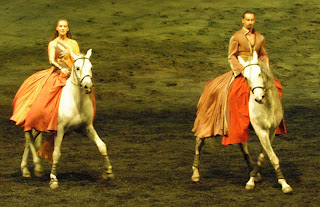 Two other elements that were integrated and enhanced the show were some creative music and clever choreography.  Guitar, drums, violin and cello and vocals to fit the mood.  Michel Cusson a veteran of tv and movie music as well as Cavalia provided the score.

This capped off an afternoon in Toronto visiting the St Lawrence Market and the Distillery District and an excellent meal at Paganalli"s.  After the show a ride home with good friends talking about the show.

To find out more information check out their website http://www.cavalia.net/en/odysseo/videos     You can see a video of performances and also one of the big top going up.

These photos were all done by my brother Marshall who has his own website with a lot of interesting photos.  You can check it out at:  http://www.fotoworks.ca
Posted by John F Davidson at 2:54 PM