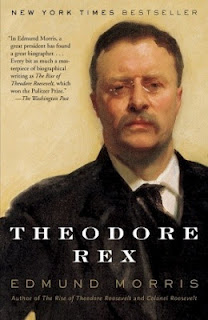 My image of Theordore Roosevelt had been based on caricatures, particularly "Arsenic and Old Lace" where one character obviously insane thought he was Theordore Roosevelt.  I was also vaguely aware of him leading  a charge in Cuba and bullying Canada over the Alaska boundary.  Blustery buffoon about summarizes my perception.

How does a cartoon character get to be president?  This book doesn't really answer that question as it starts at the point where Theodore Roosevelt is notified of the assassination of President McKinley.  Originally Roosevelt was considered such a problem that it was better to make him Vice President than Governor of New York.   At the time he became the youngest President in American history.  I missed that early part of his biography which to me means I missed the character building years.  This book by Edmund Morris goes into a lot of detail in the presidential years.

What type of character was he in reality?  To start he was intelligent and even more so emotionally intelligent, meaning he could read people fairly accurately.  He was an excellent manipulator.  He made reporters feel they helped shape policy by sometimes consulting with them or confiding in them.  He did have a strong sense of fairness, but was determined to get what he wanted.  He was very expressive, often in an exuberant manner.  He was familiar with ancient Greek and Roman history.  Tennis, boxing and even jiu-jitsu were common activities at the White House and he was famous for his wild adventure tours.  He lost most of the vision in one eye from boxing while serving as president.

What did he accomplish?  Surprisingly a number of good things.

He was a true lover of nature which doesn't preclude a great joy of killing wild animals.  One of his pleasures in life was listening to birds sing.  Traveling in wilderness with guides was one of his favorite activities.  He added national parks to protect the encroachment of urbanization.

He got the Panama Canal built.  There was an element of ruthlessness involved, but most people are unaware of the difficulties.  When he became involved it had been decided to build a canal through Nicaragua despite the fact it would be longer and cost more to maintain.  He was persuaded that through the Isthmus of Panama, made more sense and it was part of Colombia.  Negotiations started off positively, but deteriorated as Colombia seemed to always want more.  A section of the people who lived in the province of Panama became concerned that the deal that would benefit them would be lost.  This was a spark that fueled a rebellion which Roosevelt encouraged.

He was instrumental in negotiations after Japan thoroughly defeated Russia militarily in 1905.  Both sides appeared intransigent.  It was a matter of pride on both sides.  After a lot of behind the scene activity Roosevelt invited both parties to Portsmouth, New Hampshire and eventually got an agreement to end the Russo-Japanese war.  He was honoured with the Nobel Peace Prize for his efforts.  Earlier he helped avoid a war between Venezuela and Germany.

His presidency was only about two generations removed from the Civil War and prejudice was very strong against blacks.  One of his first visitors was Booker T Washington to their mutual benefit.  He appointed some blacks and moderate whites to small position in the South, but tried to be careful not to offend whites.  He could only go so far, but did move in the right direction with one notable exception.

He was a prolific writer, mostly historical and nature.  His son Kermit suggested he read a book of poetry which Roosevelt enjoyed.  He learned the writer Edwin Arlington Robinson was in a difficult situation so he arranged for a job with no demands so he could write.  Eventually Edwin won three Pulitzer awards.

He got involved in a project to simplify spelling that had mixed results.

He felt some companies were too big for the benefit of the country and also that workers did not always get a "square deal".  Legislation to improve incrementally the worker's situation were made.  He helped settle a difficult coal strike.

Some bad things?  There was an incident  in Brownsville he locked himself into a position without having the facts and his pride wouldn't let him admit he was wrong.  Blacks were accused of attacking white officers and on slight evidence he condemned the blacks and had them dishonorably discharged.

He was a dynamic person.  This book covered only 8 years of his life and I know he was not finished doing interesting things.  I also know he had a very unique background that helped direct him to the presidency.  He was always destined to do important things, but an assassin gave him some opportunities  at a relatively young age with America ready for more changes.
Posted by John F Davidson at 3:50 PM