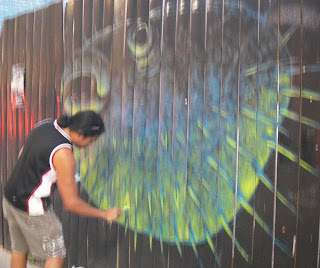 I have lived in the north end of Hamilton for almost 30 years. When I first moved here it was considered poor and rough. Fortunately we are within easy walking distance of both the harbour and downtown. As a big library user and Farmer's Market shopper my wife and I have been walking downtown mostly on James St North for over 20 years.

In that time we passed by a lot of boarded buildings, empty stores and sometimes you felt you were walking the gauntlet. The last few years there has been a dramatic change and our walks are much more pleasant. From the efforts of some individuals (and there are a few willing to take credit) it has evolved into an artistic colony 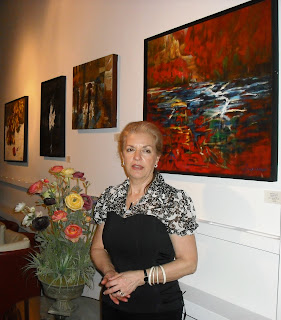 The real driving force has been economics. A lot of Toronto artists noticed that rents were much cheaper in Hamilton. There has also been a lot of recognition that there is a lot of interesting and preserved architecure along the street. One person I like to credit is Graham Crawford who now runs basically at his own expense HIStory and HERitage.

PHOTO:  Gesuina Eyford with some of her paintings.

The art crawl got started with no involvement of mine several years ago. About three years ago I investigated out of curiosity.  What I saw was a mishmash of a variety of art.  Some of it I would describe as weird, but a politer way might be experimental. There were early on some of what one artist described as more "accessible" art.  As time went on more galleries and studios offered more variety.  Craft stores opened their doors and there was something for everyone. 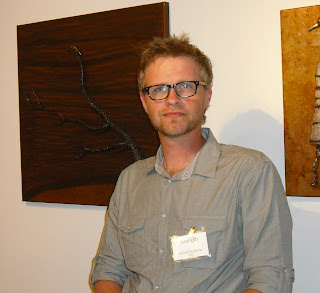 One of the attractions for me has been the opportunity to talk to artists.  Some are local, but many come from other areas.  They gained inspiration and training all around the globe.

Battle of the Brushes got my attention and I was able to attend one of them.  You pay a small amount of money and get to vote for a particular piece of art.  I believe there were six artists and they all start from scratch.  At first it is difficult to figure out what they are working towards.  The crowd circles around (not always in the same direction) to view the progress each artist is making.  By the end you put your ballot in the box of your favored artist.  A winner is declared and all the paintings are auctioned off.

PHOTO:  Jarrod Hogeterp with some of this work on the occasion of Arcelor Mittal Dofasco buying some of his work.
http://www.flickr.com/photos/edeva/419164351/ 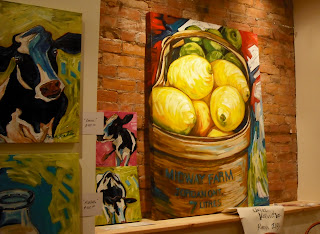 Restaurants, at least some of them seem to benefit from the Friday excursions. The two I noticed are Mex-I-Can and Ola's Bakery. I discovered a small snack place, Hammocks Monimbo where you can get some treats from Nicaragua that are now a tradition with me.  There seem to be more restaurants and sometimes food trucks. 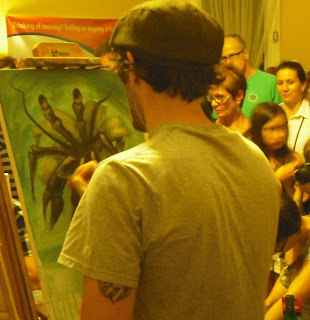 As time goes by the Art Crawl seems to expand in different directions.  Already locations not actually on James St North are claiming an inclusion.  The Central library now puts on an art exhibition plus provides some entertainment.  The Battle of the Brushes has moved to King St.  King William St encourages art lovers to visit.

PHOTO:  Bryce Huffman working on painting that won Battle of the Brushes.
http://www.brycehuffman.com/about.html

This has just been a sampling of some things I have enjoyed.  I hope to show and write about more in the future. 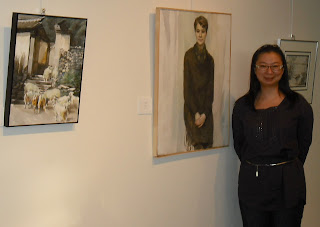 PHOTO:  Ying Yu with display of her art at Gallery 4 in the Hamilton Public Library.


CLICK ON THE ARTIST LINKS TO SEE SOME BEAUTIFUL ART AND LEARN A BIT MORE ABOUT THEM.
Posted by John F Davidson at 4:37 AM