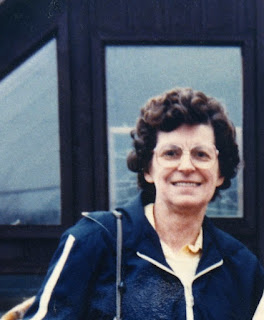 There is no danger of me forgetting my mother, but unfortunately my two kids, Heather and Michael  never really knew her, although they very definitely have a little bit of her in them.  Dorothy Coakwell grew up in the north end of Oshawa and my father lived very near downtown (in fact on the site of the now current GM Centre).  They met roller skating at age 14 and both went to the same high school

My mother was the youngest of three, but married first. She also had a child first, me having that honour.  She turned 21 on January 27th and was so nervous about her first born that she went to the hospital on a false alarm, but stayed for two days until I was born on the 29th.

I know from being told that when my parents first married they lived in their own house, not too far from my grandparents.  Shortly after I was born my Grandfather Davidson had a stroke and my parents moved into the household.  My Grandfather died a few years later.  So for the next few decades my mother  lived in the same house as her mother in law.

I don't really remember much before the age of 5, but I do remember having stories read to me.  I remember going to teacher parent nights with my mother.  Fortunately for me they were not painful experiences, partly because I was reading at higher levels than most of my classmates.  I won two costume contests at school ice carnivals due to my mother's sewing efforts.

When I was in grade two I was told I would have to have an eye operation (I had inherited cross eyes).  I was given a choice of going to Toronto (where the doctor lived) or Oshawa (where our family lived) or Bowmanville, (the furthest for the doctor).  I chose Bowmanville.  My mother visited each day.  I was blindfolded for a week and pretty bored.  She used to give me coins to feel and if I could get it right I would get to keep them.  An example perhaps of how blind people compensate by developing other senses.  She read to me a series of children's book by Thornton W Burgess that I soon became addicted to.  More on how this affected me:  http://www.therealjohndavidson.com/2020/08/cross-eyed.html

One time we were having poor delivery of our newspaper and my mother was very annoyed.  She told the circulation manager that she had a young son who could do a better job.  I was actually about two years younger than the usual starting age and had no thoughts of doing it.  She went around with me that first day and it was a good thing as I was at the butt end of a lot of dissatisfied customers including one deaf mute who had trouble expressing himself.  I had a route altogether for about four years.  I later became a circulation manager (for over 15 years) and could relate to my earlier experiences.  My experiences weren't all positive, but very helpful in understanding what paper carriers were up against.

At the end of the first week of high school was initiation day.  It was fun, but really it was humiliating by design.  I was very adamant I didn't want to attend the dance that night.  I had not had very much experience with dances and felt this was a bad time to start.  My mother was determined I would have a better social life than she had had.  I am not sure my mother actually stomped her feet, but it was pretty close.  I ended up going and having a wonderful time in a major ice breaking way.  Ironically I recounted this story in another city many years later just after my mother had died to the wife of the minister who as it turns out had been one of my tormentors.  I don't mean that in a vindictive way as he was actually very school oriented.  I would also add that the minister's brother had been one of the earliest to encourage my basketball enthusiasm.  Another irony, his father had married my parents.

Most people would be surprised to learn that I sang loudly and often at home  A few people have even commented that I had a very good voice, however I was very sensitive about singing in public. My mother confided in one of my teachers who recruited me for a small singing role in a school play. I quite enjoyed it, but unfortunately when we moved for the next grade that ended my musical career.

We moved from Oshawa to Haliburton just before I was to enter grade 12.  My Grandmother Davidson moved with us, but increasingly required difficult personal care from my mother.  In a few years she moved to a nursing home an hour's drive away in Lindsay. My mother drove every day to keep her mother-in law company.  Later my grandmother was able to move to a nursing home in Haliburton.  My mother not only visited her every day, she ended up doing favors for the patients and staff.  She was recognized as a volunteer and then to her surprise she was hired on a regular basis. Not all of us get paid for doing what we like to do.

I remember we didn't really have a lot of family traditions, but when I felt I was too old for a birthday party, my mother made a big fuss.  When I protested she said it wasn't just for me but for my younger sisters.

My Grandmother Davidson died and my mother phoned me first and asked me to phone my siblings. Her death was not a surprise, but it wasn't pleasant calling my brother and sisters.  It was an honour to be given the responsibility.  A little on both my grandmothers:  http://www.therealjohndavidson.com/2020/12/two-grandmothers.html

When I got married there was a minor clash of cultures.  My family was more traditional Canadian, whereas my new bride's family was very family oriented.  At our wedding there was something like 200 from my wife's side and less than 50 from my side.  I remember pleading with my mother to help even up things a bit, but she felt everyone who should be, had been invited.  My father was called upon for a toast and said something to the effect that I was a very lucky guy to have such a bride and he was amazed she saw something in me.  Unexpectedly my mother got asked to say a few words and she said Sharon, my wife was also lucky.  I agreed with my father. but it was nice to hear my mother's words.

My parents moved to Cambridge and my mother was hired at another nursing home.  A little closer to my Hamilton home and visits were a little more common.

I had learned about a special Junior Shareholders club put on by Irwin Toy.  I thought that a great idea to get my kids introduced to the world of investments.  Really it was just a gimmick to get more people to buy stocks, but my two kids made a profit on it that helped pay their way through university.  I remember trying to persuade my wife to take a day off work to attend one of these meetings (where the junior shareholders got to play with new toys) and shamefully became very stubborn about it.  My parents overheard part of the discussion and quietly decided my mother would help.  For her it was an especially long day as she had to drive from Cambridge to Hamilton and then get driven to Toronto and then back.

Not too long after we learned my mother, a lifelong non-smoker had emphysema, but we were told she would live at least another ten years.  Only a few weeks later she had to put on an oxygen mask. She did not want her grand-children to remember her this way.  My oldest nephew, Steven insisted and I am grateful that he did visit his grandmother.

I remember my dad and her went to visit old friends recognizing there wasn't much time left.  They traveled to Georgetown, Oshawa, Cornwall and Haliburton amongst other places.  My mother mostly laid in bed in an RV my dad had bought to make it more comfortable for her to travel.

On one of my visits my mother confided to me she wasn't able to relax.  I gave a musical tape (instrumentals of Puccini) that she and later my father agreed helped a lot.  Around this time I went to our local library with my daughter Heather and came across a tape with the sound of ocean waves.   I hesitated and started to put it back.  For some reason Heather insisted that I get it, and after a few minutes worth of arguing I gave in.  Afterwards I decided to give it to my mother and again learned that she found it very effective in relaxing.  I am very grateful for what Heather did.

Things started to happen much faster.  The ten years compressed to about six months.  The week before, not realizing how close it was and not feeling comfortable I made other plans, but my sister Susan shamed me into visiting and I am grateful for that.  I found it very hard looking at my mother suffering.  I didn't know what to say.  At one point she asked me to give her some water.  I ended up spilling as much as she was able to drink.  I tried again and was a little bit more successful.  It was an effort for her to speak, but she reassured me "you did fine."  Very shortly afterwards her last words to me expressed a concern she had about one of my siblings and I tried to reassure her I would take care of it.

She died the next day after being in a coma with her sister Ruth Stewart who had driven in from Cornwall at her bedside.  Mom was only 58.  Ruth's husband, Cam gave some good advice about keeping the family together and they both did their part to help.  My cousin Donna Stewart gave me some reassurances on a promise I made to my mother.

Like many youngsters I know I disappointed my mother countless times, but she always encouraged me to do almost anything I wanted to do.  Sports, music, hanging out with my friends.  She was very accepting of my friends and girl friends over the years.

Memories keep creeping back (May 7, 2021).  My mother was with me when I got my first speeding ticket.  My youngest sister was in a hospital in Peterborough about 1 1/2 hours away and my mother went every day and to encourage her oldest son to visit here youngest child in trying circumstances she suggested I drive.  Coming home I got carried away and probably drove about 10 miles an hour above the speeding limit and was stopped by a police office who had been following us.  My reprimand was really very mild and I was allowed to finish getting home (a little more slowly).

Sometimes I feel cheated especially for my kids, but I try to focus on the good things.  Mothers are very special people.  I am lucky to have a mother in law and have my wife, the mother of my two children.

to learn about my father:  http://www.therealjohndavidson.com/2012/06/remembering-my-father.html

to learn about my mother's close relation to her sister:  http://www.therealjohndavidson.com/2014/11/my-aunt-ruth.html

P.S.   Recently (Dec. 10, 2020) had my memory jolted when someone asked my favorite cookie.  My mother used to bake "date cookies" and I gobbled them whenever I could.  She gave the recipe to Sharon and she made one batch which I loved, but it turned out a key ingredient was lard which is considered unhealthy and I have not had any since.