When I was in elementary school I loved baseball. Other than playing pickup baseball at a neighbourhood level it took the form of collecting baseball cards and poring over seemingly endless statistics. Of course I watched baseball on tv (which had only recently entered my household--that is really a hint of how old I am, not how poor we were).

Over the years my interest in baseball has waned (too many strikes, but also too many other interests). One of those interests has been Bollywood movies. 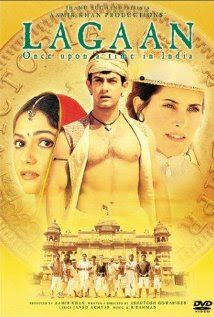 On the whole I tend to avoid sports movies, but the first Bollywood movie I saw, recommended by my sister Rebecca was "Lagaan." I didn't know what to make of it--subtitles, songs and dances in the middle of plot development, a leading actor, Aamir Khan who I later came to appreciate, but disliked in this portrayal. Despite all that I enjoyed the movie and part of it was the sports angle.

Most popular sports movies are about the under dog beating the champion. Champions tend to be arrogant and nonchalant and lets be honest, most of us are not champions. I like the tension that can be found in many activities, but is most obvious in sports. Cricket was something the oppressive British military colonizers amused themselves with and along with the rest of their culture felt it meant they were superior.

The poor natives in "Lagaan" don't have a clue about cricket, although they do claim a child's game was very similar. As circumstances develop the Indians naively challenge the soldiers in order to lessen a suffocating tax burden. A visiting British lady taking pity on them (and providing a romantic angle) attempts to teach them the rudiments of cricket. As you might expect at the end the natives do overcome the Brits at really the last possible second after many twists in the game.

They do it by uniting. The native side seems to represent a wide range of Indian religions including an untouchable and somehow they reconcile their differences in the face of the hated foreigners.  As I recall the movie cricket was played in an older style. The game stretched over a long period of time and as I gradually caught on there was tension a true sports fan can get addicted to. Not the type of tension you get in baseball with alternating at bats after every three outs, but easy enough to identify with. 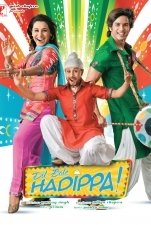 "Dil Bole Hadippa" did not get great reviews, but had one of my favorite leading ladies, Rani Mukerji. She played a spunky girl who liked to challenge men on her batting ability, but who could not be accepted for a team. She eventually had to disguise herself as a man. That led to the inevitable misunderstandings and comic double entendres. The leading man, Shahid Kapoor was a superior cricketer who was prominent in England and returned to visit his father who desperately wanted to overcome a long losing streak. Naturally the climax involves a long drawn out game with a great deal of tension. This victory required an effort overcoming pain in case you thought cricket was sissy.

"Iqbal" was another cricket movie that actually received favorable reviews. Iqbal is an adolescent who is also a deaf mute. This movie provided the best example of bowling of all the movies discussed here and I admit I was impressed with the motions and effort involved. It also had some coaching strategy not noted in other movies. Iqbal's mother was so intently interested in cricket that she started labour during a cricket celebration. Iqbal's younger sister, very critical to his later success was just as fond of cricket. But, and a big but, his father was not a cricket fan and proved to be another obstacle. This movie also illustrated some of the corruption in cricket.  Loved the background music.

"Patialia House" offered still another disadvantaged cricket player. This time Akshay Kummar has been forbidden to play cricket by his father who was very upset with the English, although he brought his family up in London. At age 34 Akshay going behind his father's back and against a lot of initial resistance by the cricket authorities actually made the English team and fairly quickly establishes himself as a key player. A lot of family dynamics and in the end cricket turns out to be the key unifying force.

What do we look for in sports? For men it might be said sports are an outlet for aggressiveness. For some men and a few women they immensely enjoy the skill involved. For both men and women the uncertainty creates a dramatic tension we love.  Movies try to capture the uncertainty of a sports event, but of course there is never quite as much doubt as there can between really well matched teams in real life.

Cricket is one of the most popular sports in the world. It enjoys a strong professional system. For most baseball fans, especially those who have never seen it, cricket is boring, elitist and foreign. If you have never watched it up close with the best players it is very easy to dismiss. I think it is fair to say that it takes great athletic skill to either bowl or bat at the international level. Fielding doesn't seem as prominent, but then the ball is harder, the players have no gloves, and they have more ground to cover. A good fielder can negate spectacular batting and change the course of any game.

Strategy is something I have only a superficial understanding of. Unlike baseball the cricket batsman can get many more opportunities during the course of a game. Unlike baseball when a bowler is taken out of the routine he can be reinserted. This allows coaches to rotate their best bowlers to optimize their performance. Of course fielder placement can be critical. Although every single play can be the game decider, cricket is a game of strategy, decided by bringing many details together.

In the course of writing this post a prominent cricketer, Mansoor Ali Khan died and generated a lot of mourning across India. He was literally royalty, the Nawab of Patudi, but helped breakup some of the royal traditions. At Oxford he was the first Indian captain of their cricket team. As a player he was a high scoring batsman, but made his mark as captain of the Indian national team. The national team was a collection of players with regional loyalties. Perhaps because he was a Muslim (and conscious that many top players had shifted to Pakistan) he encouraged national loyalties. By marrying Sharmila Tagore, a glamorous Bollywood star he glamorized cricket. Two of his children, Saif Ali Khan and Soha Ali Khan are significant Bollywood stars.

The four movies I have talked about are a good introduction to Bollywood for a sports fan. You will meet some of the top stars (Aamir Khan, Rani Mukerji, Akshay Kumar, Shahid Kapoor, Naseeruddin Shah, Anupam Kher), interesting directors (Ashutush Gowariker, Nagesh Kukunoor, Nikhil Advani) some great music (A R Rahman, Salim-Suleiman, Pritam Chakraborty, and my favorites Shankar Ehsaan Loy) and some stirring sports action.
Posted by John F Davidson at 4:18 PM