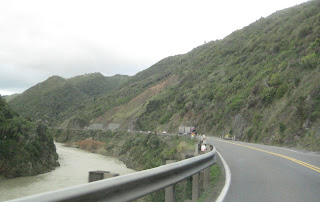 Hopefully my kids think this is another boring blog.

To give some perspective just before this past Christmas my company, OKD Marketing asked each of their employees to provide a secret to be used for a Christmas party. I chose to say that I had hitch-hiked 15,000 miles. Talking to one of the young organizers I had to clarify why I had used miles instead of kilometers. The government had started a conversion program when I was indulging in my hitch-hiking career and when I started making my calculations it was far easier to use miles. That dates me and to some extent dates hitch-hiking.

I can’t remember when I started hitch-hiking. I do recall friends (including Bob Stone) encouraging me and I could not have been older than 16 (I think a little younger). In the beginning most of it was going around and near my home town of Oshawa.

I became conscious of danger, but at the time it seemed distant and very unlikely. I have ridden in cars and trucks with hundreds of strangers and feel they all had benevolent intentions. What encouraged me to overlook the danger was FREEDOM.  No car, little money and a keen interest of what was on the other side of the fence seemed a lot more important.

My parents just before I was to enter grade 12 decided to move from the urban city of Oshawa to the rural area of Haliburton, about a two hour drive away. I decided to see my old friends. I also realized that my new friends lived a lengthy school bus ride away. Then I went to the University of Guelph and found new horizons.

Always alert to information I discovered one helpful tool was using a sign with my destination on it.

Going from Guelph to Oshawa or Haliburton meant going around Toronto. On one occasion I was stopped by the police and given a fine that certainly hurt.  I learned you are not allowed to hitch-hike on a controlled access highway.  I was able to use some of the ramp areas, but they greatly reduced the pool of possible drivers.

On a long weekend, I started out from the University and did fairly good until I got to Toronto where there was a traffic jam. Nobody wanted to stop, but finally I got a ride that at first unnerved me. It was a fellow I knew as a bully in Haliburton. He had gotten a job in Toronto and was going home for the weekend. It was an awkward time for me. There weren’t that many university students from my high school class and he was a high school drop out. However people change.

The scariest ride was with my younger brother Marshall when we both decided to visit friends in Oshawa from our home in Haliburton. We got picked up by a group of young men with the driver hitting over 100 miles per hour on many stretches.  Just naming the places doesn’t really give you a picture of how scary it really was. The rural roads for the first half of the trip are very curvy and hilly. Later I learned they were visiting a lawyer in Oshawa regarding a very serious auto accident.

In Haliburton the students and teachers come from a very wide area. One of the teachers offered me a summer job doing handy work. I ended up hitch-hiking most of the time in both directions, sometimes smelling of grass, splattered with paint or a few times with insulation fibres in my skin, but it was easy.

Hitching a ride in Haliburton I got picked up by a fellow from Hamilton who told me I lived in “God’s country.” He described a scene that sounded horrific and looking back I realize he was describing the inside of a steel mill and not the city itself.   Nonetheless it turned me off the idea of ever working or living (or even visiting) the city that I now live in and love. He was right though, Haliburton is “God’s country.”

A trip from Guelph to Haliburton again took me around Toronto.  Rides seemed to be short with long waits between. An unusual vehicle driving by was a truck pulling a house, obviously going very slow. It passed me several times before the driver stopped to offer a ride. He said he would have given me a ride earlier, but he felt I would get there faster with other drivers.

For a few trips I traveled from Guelph to North Bay and back.  For a few legs of the trips I used a train pass, paid for a bus ride and got a ride from a friend of a friend. He lived in St. Catharines and thought that Guelph Line was on the way to Guelph (only in a very indirect manner). I had no idea, but headed north. The irony being that not too many years later I drove the same exit to visit a girl friend (now my wife) and also more recently for my job. I was very lucky as one driver spotted my sign and realized I was way off course. He was driving about half the distance to go home, but decided he would visit his sister in Guelph. Lucky for me as otherwise I would have been totally lost.

An unusual trip for me was from North Bay to Haliburton. At Hunstville there is a cross over to a road going to Haliburton. It was very late and I thought for the first time I had better find a place to stay overnight. However I had very little money and no connections. I decided I would hitch-hike all night and if necessary sleep in a ditch. I got picked up by a fellow and got talking.  I had been a very big fan of the Oshawa Green Gaels (who won several national lacrosse titles) and talked about a lot of different players, some of whom I remembered had come from Huntsville.  It turned out one of the players I talked about was the driver. He asked me how much money I had and then took me to a boarding house and talked the landlady into letting me stay overnight (she actually kicked her husband out of a bed). I think my lacrosse playing driver may have sweetened the offer, because I only paid $3.00 for my overnite stay in Dwight.

The next morning was another memorable one for me. A fellow and his wife were up from Windsor as he had heard the fall colours were very spectacular. They certainly were on that day and he stopped beside the road and asked me if I minded if it he took a photo of his wife with my sign against some of the trees and fallen leaves. He said he was “high on fall colours.” I had barely noticed fall colours before but with his enthusiasm I have since appreciated them a lot more, especially since I don’t get to see them as often in such a spectacular fashion.

Out of university looking for a job. On one of my trips someone suggested a particular line of work that I had never thought of before.  Based on the enthusiastic suggestion I applied to agencies all over Ontario. I got a response from one in Belleville who was interested to interview me. An almost totally new route for me that took me a couple of hours to do. I didn’t get that job, but it did help me understand better what was expected and I got hired for a similar job a few weeks later.

You meet a wide variety of people hitch-hiking and hear a lot of different stories. One I remember was one fellow who had discovered Greek music (he wasn’t Greek) and had me listen to a lot of it. It didn’t bore me at all and in fact was just another example of opening a door.

My first visit to Kitchener was done by hitch-hiking. On a Saturday with a friend we hitch-hiked for no particular reason except looking for something different.  I was impressed enough that later I sought out a job in Kitchener.

I hitch-hiked in all kinds of weather. Sometimes hot and sweaty, sometimes rainy. The worst I remember was winter weather, cold and snowy. I have spent hours in that kind of weather. To keep myself going I would keep saying my ride had just left and would be by within a short time. Eventually I did get a ride and sometimes some people felt it was a merciful thing to do in such weather. I learned later on that bad weather is not always a bad thing.

While at university I saw a movie that involved young people hitch-hiking across Europe and had the line that if I ever get a car I will never pass a hitch-hiker. I kept my word for a few years, but eventually fear became a factor. A job, a wife and kids all made me look at the matter a little differently. Also "In Cold Blood" left a strong impression.

I regret that today it is not always advisable to trust people to do the right thing. There is nothing wrong with hitch-hiking. I am happy to help out others and am very grateful that so many people helped me and gave a lot of interesting experiences and truly enriched my life.
Posted by John F Davidson at 10:04 AM