PAYBACK: WHY WE RETALIATE, REDIRECT AGGRESSION AND TAKE REVENGE 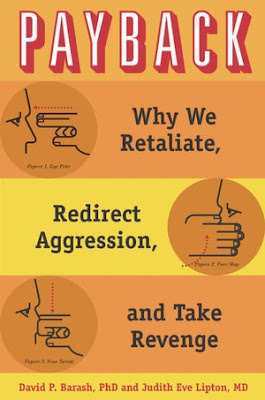 We humans have many ways to react when we are hurt. We can retaliate, redirect aggression, take revenge or become anxious or depressed. We can also bounce back in a positive manner.

Common themes in literature and movies (and real life) are retaliation and revenge. We are also very familiar with somebody not able to fight back directly. People who have been abused are often in a difficult position to directly retaliate, but often re-direct their hurt and anger to those lower in the pecking order.

The author says this goes far back in evolution. It was necessary to somehow fight back. Being able to re-direct stress does seem to lessen stress, but is it helpful overall?   Some observers have noted that many of us actually derive pleasure from the suffering of others.

Abuse comes in all types. Physical is the most obvious, but verbal abuse can hurt even more.

To-day at both the individual and global level we need to find alternatives to survive. Some suggestions seem idealistic, not realistic for humans.

Gandhi felt (and demonstrated) that a non violent response can put the initial attacker in an unexpected position of being unbalanced and disoriented. Non violence can help break the chain of anger and hatred. Gandhi thought it cowardly to avoid violence, but non violence was the best response.

Other philosophers hold that reverence for life is a key and an understanding that suffering is unavoidable. Reflecting on these thoughts more deeply would alleviate thoughts of passing on your pain.

Another thought is that we need to focus much more on restitution rather than punishing. That falls on our legal system and legislation process. Restore the situation to what it was before violence intervened. On the other hand some situations are unjust and there needs to be non violent ways of dealing with them.

How do you as an individual deal with violence or other hurt inflicted on you. One piece of advice is first to take a deep breath and take time to think. A reflexive action without thinking often leads to more complications. What is in your best interest? A well thought out response is most often better than an immediate violent reaction. An obsession of revenge is also not conducive to developing your own prospects.  F Scott Fitzgerald once said "Living well is the best revenge."

Another approach comes from game theory. A lot of experiments have taken place and one of the most effective strategies is called Tit for Tat. It boils down to making a conciliatory move, but respond in kind to that response to your effort. It indicates that you are not vindictive, but you expect to be treated fairly. Sounds simple, and many of us know situations where it doesn't have a positive outcome. The theory doesn't claim 100% success, just that it offers the best odds. In the long run avoid those who are not reasonable.

The problem of how we react to unfairness and violence is a concern for individuals and for society. This book provides much food for thought.
Posted by John F Davidson at 10:35 AM