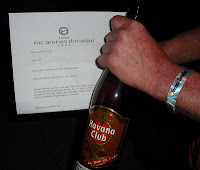 In my mind I am always seeking new and interesting things, but in reality my limited resources get used to the comfortable and the familiar.  Recently came back from my fourth visit to Arenas Doradas in Veradero, Cuba.  It was enjoyable and new ground was covered.

An unexpected bonus was that Sharon and I were given special silver wristbands to identify us as repeat customers.  One of the tangible rewards was a  bottle of rum.  We always liked the people at Arenas Doradas which is a big reason we come back.  I didn't really notice any special treatment from their staff, but they have always been attentive. 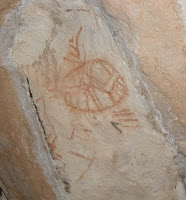 A few new experiences for me.

I checked out some caves within walking distance--Cueva Ambrosia.  At first I was given a flashlight, but after wandering around a bit on my own a guide came and explained a few things.  There are no aboriginals that survived in Cuba but they did leave a record.  Bats also lived in caves and they did survive. 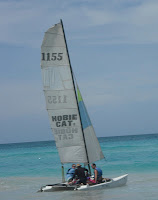 Another new experience for me was a brief sailing trip.  The resorts realize that sailing can be dangerous, especially for novices and one particular day was one of the very few in my four years that sailing was allowed.  It was just a catamaran, but it was surprising how fast they can go and that not all sailing is smooth.  You get right close to the water in a catamaran and I got a good dose of salt water. 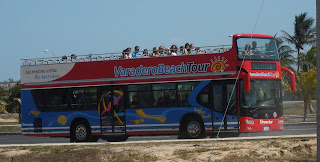 Going into town in previous years I had been content to take the free shuttle service as the timing seemed acceptable.  This year missed one connection and decided not willing to wait so went on a special double decker bus.  For one low price (5 pesos) you could get off and on the bus all day traveling from the far end of Veradero up to the far end of the Peninsula.  Sent into town for one souvenir shopping expedition I was able to make a second trip (to nail down the best deal we could identify).

There was much that we had tried and liked that was repeated.

A lot of comments about Cuba are about how bland the food is. Part of that no doubt is that they offer all inclusive packages that boil down to buffet dining which in turn is somewhat bland.  However if you are adventuresome some of those weird things can be tasty.  A la carte is usually a step up.  As a few people have commented when you go on longer tours the selected restaurants are pretty good.  We found some of the cooks were very good.

Another aspect we enjoyed was the entertainment.  They had a regular dance troop we watched two times and respect their talent. They brought in a professional Cuban band on our last night and encouraged everyone to be part of the entertainment.  They also have game type events that always make us laugh.  I do remember one emcee calling out the countries of the visitors and getting a few cheers and he added in "anyone here from the United States?"--dead silence and we all laughed.  In fact although Canadians including Quebeckers are in the majority there are people from Britain, Italy, Germany, eastern Europe and South America.  Much of the staff can speak English and French in addition to Spanish. 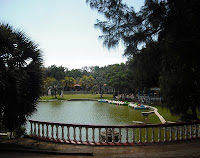 It rained the last time I visited Josone Park, but this time I made two trips in sunny weather. What I like about it is its natural setting. Plenty of birds, trees.  With three or more restaurants, and paddle boats one can spend several enjoyable hours. A side trip to the Museo Veradero across the road made me aware that the town has a history that is more than just tourism.

Veradero has one of the nicest beaches in the world.  I had thought pelicans were clumsy birds, but I have learned they are very graceful and powerful and willing to come close to humans. 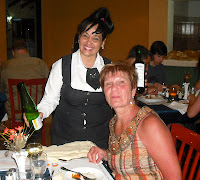 Tourism is important to Cuba, not only because of the raw amount of money, but because it provides jobs.  One big thing is bus drivers.  They take you from the airport to your resort, then they take you into town or on tours.  Of course there are other drivers of taxis and horse carriages.  A lot of people needed  to feed you, to guide you  and to clean up the mess.  I think they sell a lot of rum and cigars which also provides jobs for those who might otherwise be unemployed.  For the most part I find the people wonderful.  At one of our a la carte dinners a couple with their two children were celebrating their anniversary and shared some champagne and cake with other guests including us.  Sharon later played Crazy 8's with them.

One complaint, that might be shared for other tourist destinations is the overwhelming lack of original souvenirs.  We walked by dozens of boutiques and saw pretty much the same trinkets with the same designs. Some of them were attractive, but we wanted something unique.  We bought a piece of art  (paint and wood carving) where we saw the artist putting it together.  It was attractive and we felt we were helping to support someone making a truly artistic effort. 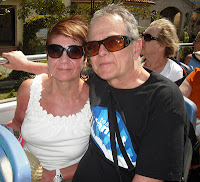 One of my favorite activities is reading.  Sometimes it is nice to have ocean waves in the background and other times to be isolated.  Of course numerous hours in an airplane or waiting for a bus.  Finished five books; two biographies and three novels on my Kobo reader.  I also bought a book on José Marti to read on the plane ride back home.

from a previous visit:  http://www.therealjohndavidson.com/2011/04/cuban-memories.html